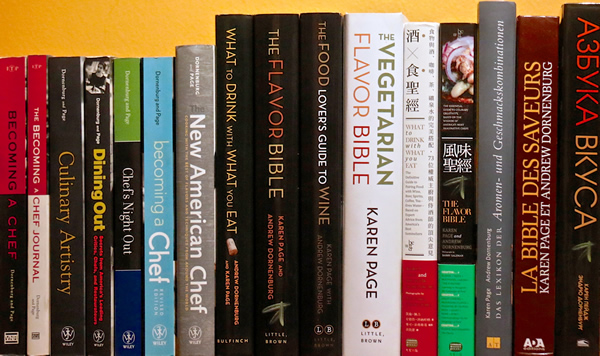 “Andrew Dornenburg and Karen Page’s books…are the best place to experience the cult of the New American chef.”

“Chances are the chef at your favorite fancy restaurant has studied the work of Karen Page and Andrew Dornenburg, authors of THE FLAVOR BIBLE.”

“Their books are classics for every thoughtful cookbook shelf.”

“These are not cookbooks. They are schematics for a skilled cook, points of departure to guide invention.”

“One of the ten best cookbooks in the world of the past century:  THE FLAVOR BIBLE.”

“The most useful wine-with-food guide in English:  WHAT TO DRINK WITH WHAT YOU EAT.”

—Edward Behr, The Art of Eating

“The world’s greatest book on the subject:  WHAT TO DRINK WITH WHAT YOU EAT.”

“We love all your books.”

—Matt Holloway and Michelle Davis, hosts of ThugKitchen.com, via Twitter

“If you look on any professional chef’s bookshelf, chances are that Page and Dornenburg’s books are going to be there, battered and bruised, coffee stained and taped together at the spine. Why this place of pride? Because these books contain the most useful culinary lists ever assembled.”

“Karen Page and Andrew Dornenburg’s excellent compendiums CULINARY ARTISTRY, WHAT TO DRINK WITH WHAT YOU EAT, and, most recently, THE FLAVOR BIBLE, are nothing if not smart, savvy and plugged into the American and, to a lesser extent, the international culinary world. Their books reflect a Who’s Who familiarity with the great chefs of America, and THE FLAVOR BIBLE is a gas to read. It’s designed to jumpstart imaginative menus and creative cookery for anyone ready to build from scratch. Page and Dornenburg litter their books with great ideas and anecdotes from those great chefs, so just flipping the pages is enough to fire you up to build your own brilliant recipes.”

The publication of BECOMING A CHEF: With Recipes and Reflections from America’s Leading Chefs (1995; 2nd ed. 2003) has been cited by the National Culinary Review as a pivotal event in the history of American culinary education for providing “the first compendium of answers to some of the most common questions an aspiring chef can ask,” and is said to have “established the category of contemporary writing on food.” The 100,000+-copy bestseller has been an inspiration to readers as diverse as professional chefs, CEOs and other business leaders, a PhD candidate in biochemistry, and even a former cocaine dealer turned executive chef and author. It won the 1996 James Beard Book Award for Best Writing on Food.

The BECOMING A CHEF JOURNAL (1996) is a unique journal in which cooks can record their most cherished food memories. Peppered with inspirational quotes, this keepsake is the perfect place to write about the sights, sounds, aromas, and flavors of all their culinary journeys — both inside and outside the kitchen.

Frequently cited as the #1 favorite book of professional chefs and sophisticated cooks around the globe for jump-starting their creativity in the kitchen, CULINARY ARTISTRY (1996) is the first known reference on flavor compatibility and culinary composition. By allowing readers to create their own flavors, dishes and cuisines through providing an encyclopedic listing of compatible flavors, the book has proven as innovative a resource for chefs as Roget’s Thesaurus has been for writers. Avid fans of the book include chefs Grant Achatz (of Chicago’s Alinea), John Campbell (of The Vineyard at Stockcross in Berkshire, England), Homaro Cantu (of Chicago’s Moto), Rocco DiSpirito (who praised it in his 2003 book Flavor), and Michael Laiskonis (pastry chef at Manhattan’s Le Bernardin, who praised it to Saveur in February 2009).

DINING OUT: Secrets from America’s Leading Critics, Chefs and Restaurateurs (1998) was the first book ever to bring to public focus the secretive and influential work of restaurant critics, tapping as experts not only some of America’s most prominent restaurant critics but also Pulitzer Prize-winning critics of architecture, media and music. The book was named one of the world’s best books on gastronomy at the Gourmand World Cookbook Awards held in Perigueux, France, as well as a Finalist for both the 1999 James Beard Book Award and the 1999 Julia Child / IACP Cookbook Award.

CHEF’S NIGHT OUT (2001) provided a forum for 100 leading American chefs to celebrate their restaurant passions and inspirations, from four-star temples of gastronomy to taco trucks.  The book notably includes an interview with chef Ferran Adria of the Michelin three-star restaurant El Bulli in Spain, in his first known appearance in an American book, which introduced a wider audience to his gastronomic innovations that changed cooking globally over the subsequent decade. Praised in media ranging from Business Week to Town + Country, CHEF’S NIGHT OUT was named the best culinary book of 2001 by FabulousFoods.com.

THE NEW AMERICAN CHEF: Cooking with the Best of Flavors and Techniques from Around the World (2003) provided the first characterizations of the universal lessons of — and essential differences among — 10 influential global cuisines, leading Restaurant Hospitality to characterize it as “a Godsend.”  The book was a Finalist for the 2004 IACP Cookbook Award, and cited as one of the year’s best culinary books in media ranging from New York magazine to the Philadelphia Inquirer to San Jose Mercury News.

WHAT TO DRINK WITH WHAT YOU EAT:  The Definitive Guide to Pairing Food with Wine, Beer, Spirits, Coffee, Tea — Even Water — Based on Expert Advice from America’s Leading Sommeliers (Bulfinch Press, 2006) is the first book to bridge the gap between the worlds of food and drink, providing a comprehensive guide to food and beverage matching based on more than a decade of research.  It won the 2006 Georges Duboeuf “Wine Book of the Year” Award, and the Gourmand World Cookbook Award as “Best Book on Matching Food and Wine — U.S.”   In April 2007, it won the 2007 IACP Cookbook Award as “Best Book on Wine, Beer or Spirits” and was selected from nearly 500 books to receive the coveted 2007 IACP “Cookbook of the Year” Award.

THE FLAVOR BIBLE: The Essential Guide to Culinary Creativity, Based on the Wisdom of America’s Most Imaginative Chefs (Little, Brown, 2008) is a guide to hundreds of ingredients along with the herbs, spices and other seasonings that will allow readers to coax the greatest possible flavor and pleasure from them. It received starred reviews from Publishers Weekly and Library Journal, and was named Newsweek‘s “Book Pick of the Week.” In May 2009, it was honored with the 2009 James Beard Book Award for Best Book: Reference and Scholarship.  In May 2010, it was honored in the category of Food / Cooking / Nutrition with a 2010 Nautilus Book Award (whose previous recipients have included His Holiness the Dalai Lama, Deepak Chopra, Thich Nhat Hanh, Barbara Kingsolver, Carolyn Myss, Eckhart Tolle, Dr. Andrew Weil, Marianne Williamson, Naomi Wolf, and Gary Zukav). In 2011, Forbes columnist Alex Munipov named it one of the 10 best cookbooks in the world of the past century; in 2013, Cooking Light named it to its list of the 100 best cookbooks of the last 25 years; and in 2014, Southern Living editor Sarah Gleim named it one of 10 must-have cookbooks (along with CULINARY ARTISTRY).

THE FLAVOR BIBLE has also been cited as one of the top 5 or 10 most essential books for modern mixologists, and has been featured as one of the world’s most influential books on contemporary cocktail creation on NPR’s “All Things Considered,” BarTales.it, Cocktails.About.com, DrinkingMadeEasy.com, DrinkWire.Liquor.com, Eater.com, Food Arts, TheLiquidMuse.com, LiquorSnob.com, MixologyNews.com.br, NorthShoreDistillery.com, SeriousEats.com, ServedRaw.com, The Shaker & The Jigger, SOSH.com, SpiritedGeek.com, ThirstyinLA.com, and TwoForTheBar.ca.  Counting THE FLAVOR BIBLE among their best-loved and/or most-used books are mixologists from Austin to Barcelona to the Bay Area to Birmingham to Boulder to Chicago to Las Vegas to Los Angeles to Nashville to New Orleans to New York to Phoenix to Pittsburgh to Portland to St. Louis to Brazil to Germany.

THE FOOD LOVER’S GUIDE TO WINE (2011) was not only one of the most acclaimed books of 2011, but it is also one of the most honored wine books ever. It was named “The Best Wine Book of 2011” based on 195 year-end “Best Of” lists (including those of the Chicago Tribune, Huffington Post, LA Weekly, Minneapolis Star Tribune, San Francisco Chronicle, Vancouver Sun, and the Wall Street Journal) compiled by the website EatYourBooks.com. It won the 2011 Gourmand Wine Book Award in its category for the United States, and was named “Best in the World” in its category at the Gourmand World Cookbook Awards held at the Folies-Bergeres in Paris in March 2012. In addition, it won a Silver Medal at the 2012 Nautilus Book Awards. It was also one of just 16 food/wine books published in 2011 to be named a Finalist for both of the two most prestigious awards for culinary literature: the 2012 James Beard Book Award (in the category of Reference & Scholarship) and the 2012 IACP Book Award (in the category of Wine, Beer or Spirits).

KITCHEN CREATIVITY:  Unlocking Culinary Genius–with Wisdom, Inspiration, and Ideas from the World’s Most Creative Chefs (2017) represents the latest creative collaboration (on the heels of THE VEGETARIAN FLAVOR BIBLE) of Page as lead author and Dornenburg as photographer.  It was cited on dozens of lists of the best cookbooks of 2017 (including one of the top 7 food and wine books of the year by Forbes and one of the top 10 cookbooks by The Washington Post), leading EatYourBooks.com to name it the #2 non-recipe book in the category of “Memoirs and Books About Food” for 2017, based on an analysis of 317 “Best Cookbooks” lists. The book was praised pre-publication by leading chefs and restaurateurs (including Danny Meyer, Michel Nischan, Jacques Pepin, Eric Ripert, and Marcus Samuelsson), bestselling authors (including Michael Gelb, Seth Godin, MacArthur Fellow Robert Root-Bernstein and Michele Root-Bernstein, and Shoshana Zuboff), and American Visionary Art Museum founder Rebecca Alban Hoffberger.