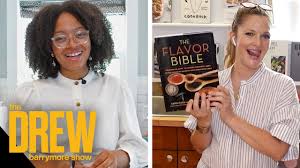 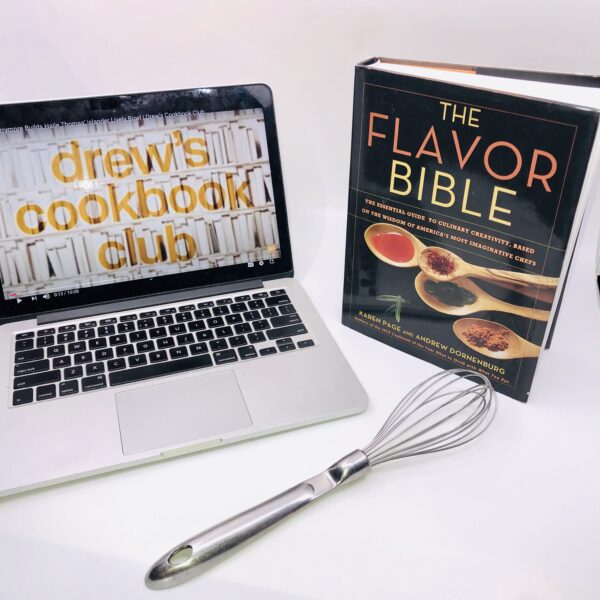 “‘Chefs are my heroes. I must read 3 cookbooks a week…cover to cover!’  After diving into so many cookbooks, Drew Barrymore wanted to share her findings with the world, so she created Drew’s Cookbook Club.  In each episode, Barrymore will invite a different cookbook author she loves to showcase not only their book but other cookbook recommendations as well….In the inaugural episode, Barrymore recommends Living Lively by Haile Thomas and invites the 19-year-old author of the plant-based cookbook onto the show….Thomas recommends one of her favorite cooking guides THE FLAVOR BIBLE, which will ‘change your life.'”
—PEOPLE magazine

Yes, THE FLAVOR BIBLE was published on September 16, 2008 — and never did we ever dream that a dozen years later, we’d be celebrating this anniversary by seeing the book named as an inaugural pick for Drew Barrymore‘s new talk show’s Cookbook Club!

The Golden Globe Award-winning actress who’s won hearts by starring in films as wide-ranging as E.T., Charlie’s Angels, and 50 First Dates, as well as by directing Whip It (an all-female roller derby movie which helped her win ours!), brings infectious enthusiasm to hosting her own talk show on subjects that include cookbooks, which she says she reads regularly and devotes an entire closet of her home to storing.

Word of her new show is being spread far and wide — including on seemingly every single kiosk and bus stop in Manhattan and every other billboard in Los Angeles.  And its media coverage has ranged from Vanity Fair to People to Star: 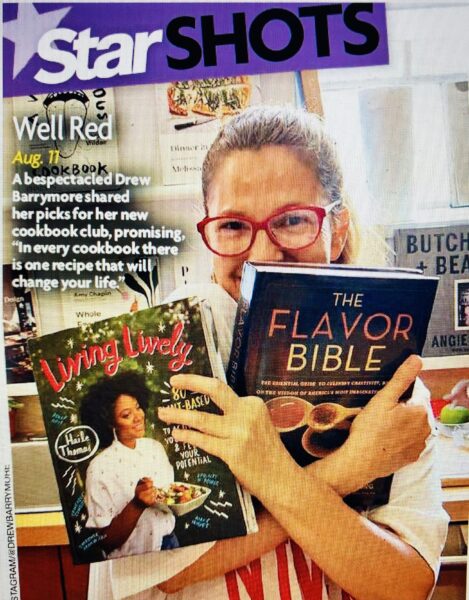 Numerous websites covered the launch as well, including Naomi Tomky of TheKitchn.com, which posted this accompanying photo: 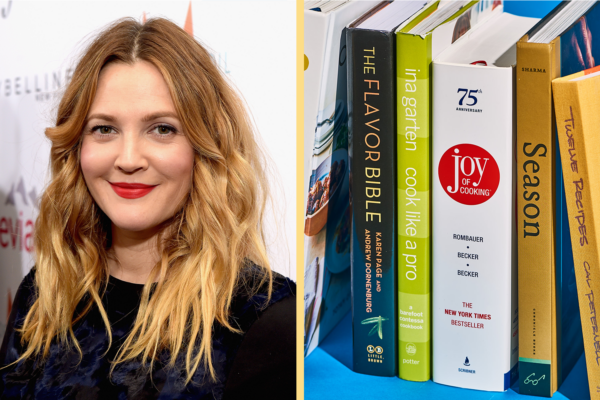 Drew Barrymore and a shelf of her vast cookbook collection — which she keeps in a closet!

During the kick-off episode of #DrewsCookbookClub, Drew interviews teen activist Haile Thomas, author of the vegan cookbook Living Lively, about her favorite cookbook — THE FLAVOR BIBLE.  Highlights of their exchange include:

Haile:  “My recommendation is THE FLAVOR BIBLE….It’s a go-to guide….If you’re not sure what spices to use, or what ingredients to combine, this is [great]….It’s like an encyclopedia — you look through and see what ingredient you want to cook or try, and it’s got all of the ingredients that pair well with it.”

Drew:  “I think for people who maybe can’t get to school also for cooking, this IS school!  This is a culinary institute in a book.”

Haile:  “When you’re going through it, it really does feel like it’s teaching you.  And you’re able to just create so many new flavor connections…..It’s just such a great kind of gateway tool to being more adventurous with cooking and food.”

Drew:  “I feel like I’m just going to go to it and reference it all the time now!”

To view the entire segment, watch below:

Drew Barrymore invites Haile Thomas to launch cookbook club with her selection, The Flavor Bible, and has the teen vegan chef teach her a recipe from her own… 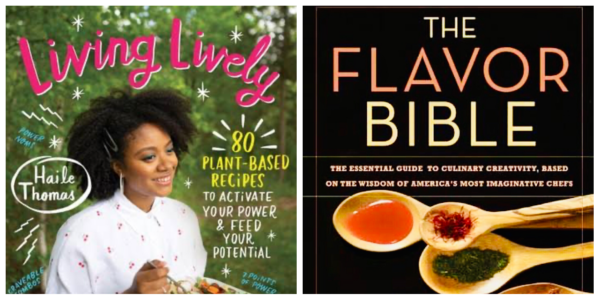 The Drew Barrymore Show is “optimism TV,” bringing information, inspiration, and entertainment to the daytime CBS audience this fall.  The show’s website is www.thedrewbarrymoreshow.com

Haile Thomas is a 19-year-old wellness + compassion activist, speaker, and author of Living Lively.  Her website is www.hailevthomas.com