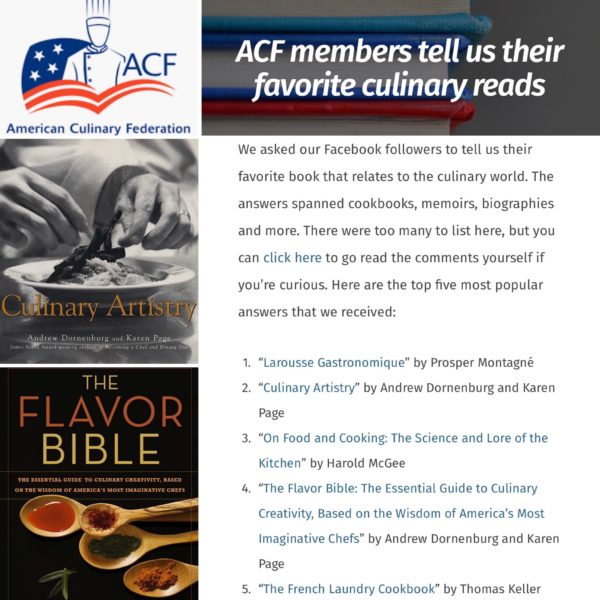 The American Culinary Federation (ACF) is the largest professional organization for chefs and cooks in North America, with more than 15,000 members in more than 150 chapters across the United States.  In an ACF survey of its members via Facebook, chefs were asked to name their favorite book that relates to the culinary world.  Just before Christmas 2019, it was announced that CULINARY ARTISTRY and THE FLAVOR BIBLE were both in the Top 5, at the #2 and #4 spots, respectively.

We’re enormously pleased to find them in the good company of beloved classics like Larousse Gastronomique, On Food and Cooking by Harold McGee, and The French Laundry Cookbook by Thomas Keller.

The ACF was founded in 1929 in New York City by three chefs’ organizations: the Société Culinaire Philanthropique, the Vatel Club and the Chefs de Cuisine Association of America. Since our inception, little has changed in our principal goals. We are an organization based on promoting the professional image of American chefs worldwide through education of culinarians at all levels.

In 1976, ACF made history within the culinary profession by elevating the position of the executive chef from service status to the professional category in the U.S. Department of Labor’s Dictionary of Official Titles.