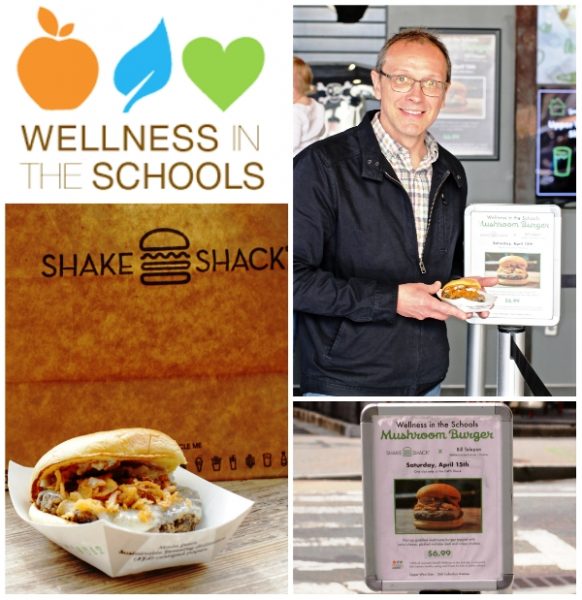 For one day only (April 15th), the Upper West Side Shake Shack offered a mushroom burger with proceeds benefiting Wellness in the Schools. Chef Bill Telepan poses with his creation.

“I was doing ‘recess duty’ at my daughter’s school and stopped in the cafeteria. The kids weren’t touching the salad bar—the lettuce was brown—so I went to the school and volunteered to create a salad-bar day with fresh greens, homemade dressings, raw vegetables. It was such a big, rousing success that I decided to get involved in a bigger way.”
—Chef Bill Telepan, as quoted in Food & Wine, on how he got involved with Wellness in the Schools

Bill Telepan is one of the most likable chefs you’re ever likely to meet.

Even if you’ve never tasted his food, you’re bound to have heard his name — especially that of the eponymous restaurant he ran for the past decade on the Upper West Side.  Whenever there’s a chef-related benefit, he always seems to have a hand in it, whether Citymeals-on-Wheels’ annual Chefs’ Tribute at Rockefeller Center or one benefiting the not-for-profit Wellness in the Schools (WITS), which is near and dear to his heart as WITS’ Executive Chef for most of the past decade.

It’s hard to keep up on all the rest, detailed in this bio on WITS’ website:

…Through his work with WITS, Bill has led lobbying initiatives from Capitol Hill to NYC’s City Hall and was a participant in the 2015 James Beard Foundation’s Chefs Boot Camp for Policy and Change. He has spoken at the James Beard Foundation’s Food Conference, the Sustainable Cities Conference at The New School, and Food Tank’s Washington DC Summit….In 2009, Bill was selected by First Lady Michelle Obama to join the Chefs Move! to Schools task force and participate in the organization’s conferences. He was also named a Food Revolution Hero by chef-food activist Jamie Oliver, a FEED50 2016 Hero by Lauren Bush Lauren, and a community hero by TD Bank’s “Rooted In NYC” campaign.

A year ago, Telepan closed Telepan, another case of costs rising faster than revenues until proving unsustainable.  As of October, he’s been running the kitchen at Midtown West’s Oceana.

We were overdue to pay a visit.  And the other week, we finally had our chance. 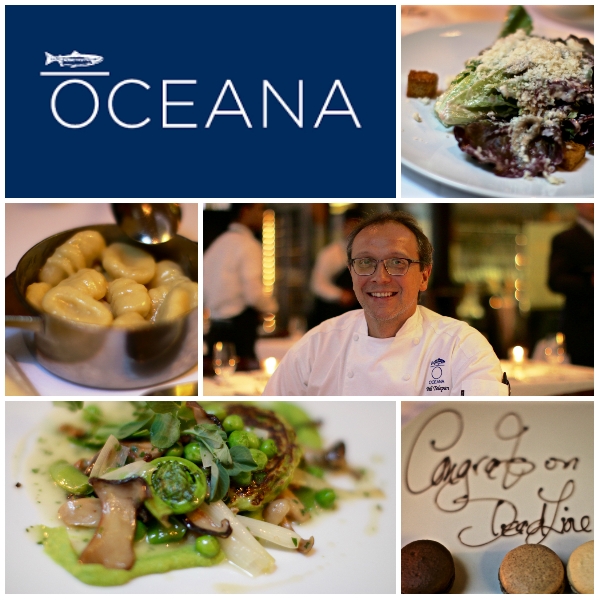 The great news is that we now have a new go-to restaurant when we’re looking for a spot near the Theater District, or asked by others to recommend one.  Telepan is a gifted chef who knows how to cook, and he’s clearly bringing a watchful eye and keen palate to oversee every dish coming out of his kitchen.

That can be tough in a restaurant of this size, let alone one packed with newly-minted graduates celebrating with their families after ceremonies at nearby Radio City Music Hall, bankers and business executives ordering massive seafood towers and big red wines, and the occasional authors on deadline getting out of the house to clear their heads.  There’s something on Oceana’s menu for everyone.

In our case, it was a perfectly executed Baby Romaine Salad, Caesar style, with or without house-cured anchovies.  (As its name suggests, seafood is the specialty of the house, so if you order your salad “with,” you’re in good hands.)

The kitchen also has a way with pasta, and we’d happily reorder our Asparagus & Egg Pasta served with lemon ricotta, basil, and mint, or the housemade Potato Gnocchi with Parmesan.

The surprising highlight for us were the improbably delicious Pea Pancakes, served with spring vegetables, mushrooms, and pea puree — not to mention the sweet gesture of the cookie plate that arrived at our table having casually mentioned having met an interim deadline that allowed us to take a much-needed dinner break.

Our out-of-town friends are already starting their summer visits to Manhattan, with accompanying requests for restaurant recommendations — especially pre-theater.  As we typically direct them to our website, we wanted to make sure Oceana was front and center.  And for those wishing to support some of the most important initiatives to ensure our country’s kids eat better and stay healthier, look no further:  Bill Telepan is making all kinds of delicious things happen.

Wellness In The Schools (WITS) is a national non-profit that inspires healthy eating, environmental awareness, and fitness as a way of life for kids in public schools.  wellnessintheschools.org