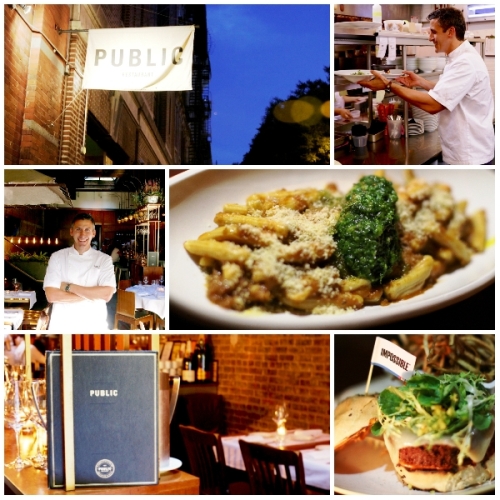 “Back in 2003, when PUBLIC opened in NoLIta, it was something of a game changer. The menu tipped its hat to the Antipodes, even offering grilled kangaroo with coriander falafel, and its industrial-vintage design, incorporating elements like antique mailboxes, card catalogs and office doors with glass panels, was not then as typical as it is today.”
—Florence Fabricant, The New York Times

We were big fans of Brad Farmerie‘s Michelin-starred restaurant PUBLIC since our first fateful visit more than a decade ago. In Brad, we discovered a chef who cooked with a unique combination of influences from his global travels from London to the Land Down Under, and who had a rare talent for making exotic ingredients come alive in a way that felt, strangely, both new and familiar.

Our last toast at PUBLIC

So when we learned that PUBLIC would be closing after 14 years on June 3rd, we hoped to be able to be there for a last hurrah dinner.  However, we discovered only belatedly that the last seating open to the public would be June 2nd, as the restaurant hosted a private wedding on its closing night.

So, we wanted to raise a toast to our last meal at the restaurant, which occurred late the night of February 16th, when we ordered a wonderful carrot Bolognese pasta topped with pesto, and tasted its impossibly delicious version of the [meatless] Impossible Burger.  Along with sister restaurant Saxon + Parole, PUBLIC was one of just a half-dozen in the country to offer The Impossible Burger, which is 100 percent plant-based with the look, smell, texture, and taste of beef.

Our heartfelt thanks to Brad and the entire team at PUBLIC for welcoming us so warmly, and for creating such delicious memories for us, over the years. While PUBLIC may be gone, it will never be forgotten.  Hope to see you soon at one of your other wonderful restaurants!

Brad Farmerie‘s  restaurant Saxon + Parole is at 316 Bowery in New York City, and is one of the few restaurants in the city serving the meatless Impossible Burger (for which reservations are required, as quantities are limited).  S+P’s version features a mushroom puree, roasted oyster mushrooms, sherry onions, and truffle cream ($18).  212.254.0350.  saxonandparole.com