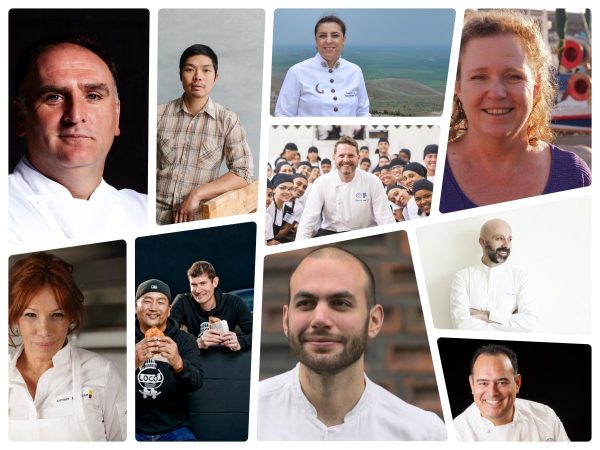 “We have tried to ensure that the profiles of the candidates meet different criteria and represent the social aspect, the environment, research and health.  Two of the candidates are working in refugee camps or with refugees, reflecting the current situation we live in.”
–Xavier Medina, UNESCO Chair on Food, Culture and Development of the Universitat Oberta de Catalunya (UOC)

“In my opinion, everything has been of very high quality, seeking excellence in terms of flavor, nutrition and sustainability.”
—Elena Arzak, President of the Prize Committee for the 2017 Basque Culinary World Prize

Ten finalists for the 2017 Basque Culinary World Prize — which recognizes a chef who has helped to improve society through gastronomy — were announced on Tuesday, June 13th, at the Palacio Miramar.  Narrowed from a field of 110 nominations, the 10 finalists represent the United States, Spain, Brazil, Turkey, Colombia, Greece, Australia, Italy, and Mexico.

The finalists from the United States — with bios provided by the Prize organizers — include:

José Andrés (pictured in top left corner):  Time magazine cites José Andrés as one of the most influential men on the planet. For Andrés, it’s not enough to have a vast chain of successful restaurants or to be a media figure – it’s about generating lasting change in multiple aspects of the food industry. Based in Washington, the Spanish chef has entered politics to promote immigration and labour reforms, as well as ‘a smarter approach to food policy.’ He also uses his profile to raise funds for projects which use cooking as a driver of social change. A Citizenship Ambassador for the Obama Administration and an ambassador for the Global Alliance for Clean Cookstoves launched by Hillary Clinton, he also runs his own initiatives including World Central Kitchen, plus education and training programmes in countries such as Haití.

Dan Giusti (bottom row, third from left):  After leaving René Redzepi’s kitchens (with whom he ran Noma), Dan Giusti recently set up Brigaid, an initiative that helps schools rethink the design and functionality of their kitchens. The know-how of talented chefs is brought into school kitchens to generate real, substantial changes. They work to serve ‘real food’ and to rebuild basic yet forgotten practices like taking our time over the food served at our tables.

Anthony Myint (top row, second from left):  Rather than contributing to the problem of climate change, food should be part of the solution.’ So say chef Anthony Myint and writer Karen Leibowitz, who have unflinchingly presented a conscious approach to food by sharing information and tools that create a positive impact on the environment. But, it wasn’t enough just to talk about it. Myint and Leibowitz also founded ZeroFoodprint, an organisation which works with restaurateurs to try to completely eliminate their carbon footprint. As owners of restaurants including The Perennial, they set up The Perennial Farming Initiative to provide funding for programs in ‘progressive agriculture’ and to encourage changes in the industry, from farm to fork.

Daniel Patterson and Roy Choi (bottom row, second from left):  Daniel Patterson’s extensive experience in fine dining merges with Roy Choi’s expertise in street-food to create Locol, a joint restaurant chain project in the USA committed to changing the fast-food concept. Far from being some fantasy around healthy eating, Locol is a very real project that benefits all involved. The initiative supports a “fast-food revolution” and changes the stigmatized link between race, food and poverty to show that we can eat better for less.

Bios of the other global finalists can be found here.

The winner will be announced July 18th in Mexico.  The Basque Culinary World Prize will receive €100,000 for a project chosen by the winner, expressing the transformative power of cuisine, awarded by Spain’s Basque Culinary Center (BCC).

Read more about the Basque Culinary World Prize at basqueculinaryworldprize.com.