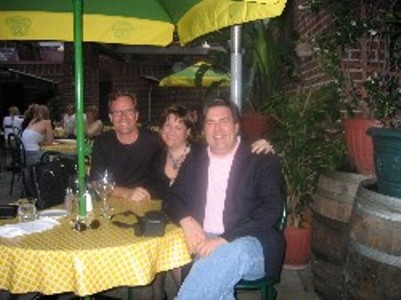 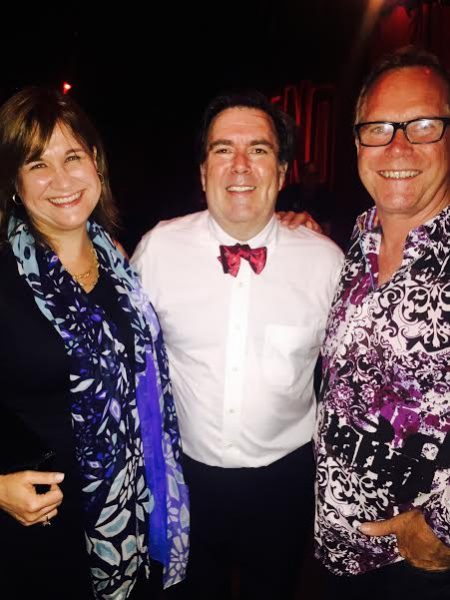 “[Kevin] Meaney‘s fellow comics immediately took to Twitter to remember a man known for his humor on the stage and his kindness off it.”
—The Washington Post (October 22, 2016)

“While we were only married ten years, Kevin Meaney in many ways was always my soul mate — he knew how to make me laugh and delight in the moment. Together we also brought a beautiful young girl into the world — our daughter Kate. Kevin, thanks for always being an angel of love and laughter in my life on earth….”
–Mary Ann Halford (October 21, 2016)

We’re still shocked and deeply saddened to have learned of the sudden passing on Friday of our long-time friend, the brilliantly talented comic’s comic Kevin Meaney.  He was 60.

No one could make us laugh harder than Kevin.  We learned to bring Kleenex to his shows at Birdland and Caroline’s Comedy Club and other venues where he managed to bring us to tears with his stand-up comedy.

We also had the pleasure of seeing him perform as an actor — and had the great pleasure of hanging out with him before and after the Toronto production of “Hairspray” in which he starred back in 2004 while we were on book tour in Canada.  The photo above at left captures our first and only visit to a Hooter’s, which was at Kevin’s suggestion.  We’d thought he was kidding when he’d suggested getting together there, but we clearly had a great time.

We’d recently heard that Kevin had gone vegetarian, and were especially happy to be able to catch up with him at a show this past year at Birdland, during which he’d asked the packed audience, “Are there any other vegetarians here?  What’s the first question we always get asked?”  The two of us had shouted out, “How do you get your protein?”, which led Kevin to launch into his hilarious bit on the subject.  After the show, we stayed to say hello and catch up (as seen in the photo above, right), and Kevin loved discovering that we were the vegetarians who’d fed him the line during the show!  Before we left that night, we’d all agreed to get together for a vegetarian feast.

But we discovered that time passes more quickly than ever, and that feast hadn’t happened yet.  And now it can’t.  Yet even without being able to create that new memory with Kevin, we feel blessed to have so many other memories of him over more than two decades — including of how hard he made us laugh, time and time again, whether during public performances or private get-togethers.  The single funniest line we’ve ever heard as guests at a wedding was uttered by Kevin during his 1997 wedding to our long-time friend (and Karen’s fellow Harvard MBA) Mary Ann Halford, with whom he had a beautiful daughter Kate.  After having dinner with Kevin and Mary Ann at their home in Los Angeles, we were doubled over with laughter watching him demonstrate how a card-carrying member of the Potwashers Union washed dishes.

While Kevin and Mary Ann ended their marriage after Kevin’s 2008 announcement that he was gay, the three still managed to create a close-knit “modern family,” and Kevin’s love of both Kate and Mary Ann was still abundantly clear to all.  Our hearts go out to his beloved Kate and Mary Ann, and the rest of Kevin’s family, friends, and fans, on his sudden passing.

[Mary Ann shared via Facebook that “Kevin was supposed to show up at Parents Weekend at Kate’s boarding school on Friday — when he didn’t and then didn’t respond to phone calls, texts and emails, we knew something was wrong. With the help of his brother, a retired police officer, we got the police to get to his house where they found him expired on the couch watching [TV] on his laptop. We don’t know cause of death yet but assume a heart attack.”  Kevin’s last Instagram photo @bigpantspeople was one of a smiling Mary Ann eating ice cream at the New York State Fair, with the triumphant caption: “We found mini cones!”]

As The Washington Post reported, “[Kevin] Meaney‘s fellow comics immediately took to Twitter to remember a man known for his humor on the stage and his kindness off it.”  That’s exactly how we’re going to remember Kevin Meaney, too.

P.S.  And whether you’re among those who somehow weren’t ever exposed to his comedy or whether you’re looking for yet another fix of his gut-busting comedic bits, feast on a few of these….Two are sets from Kevin’s dozen appearances on Johnny Carson, one is of Kevin opening for Jerry Seinfeld on Broadway in 1998, and another is from the Peabody Award-winning animated show “Dr. Katz, Professional Therapist”:

Kevin Meaney – “Why do you do this to your father and I?”

Kevin Meaney was an instant hit on this popular late-night TV show. He sets the stage brilliantly and with a style only he can pull off. He has a good singing voice, too!

Recorded August 6-9 1998 @ The Broadhurst Theatre, NYC while opening up for Jerry Seinfeld.

Kevin Meaney does “We Are the World”

In the mid to late 80s there was a big ‘phenom’ about the original “We Are The World.” Kevin Meaney poked fun at it here, mocking each performer. Look for Dan Aykroid – who was the odd man out in the original video. Kevin nails him, here. 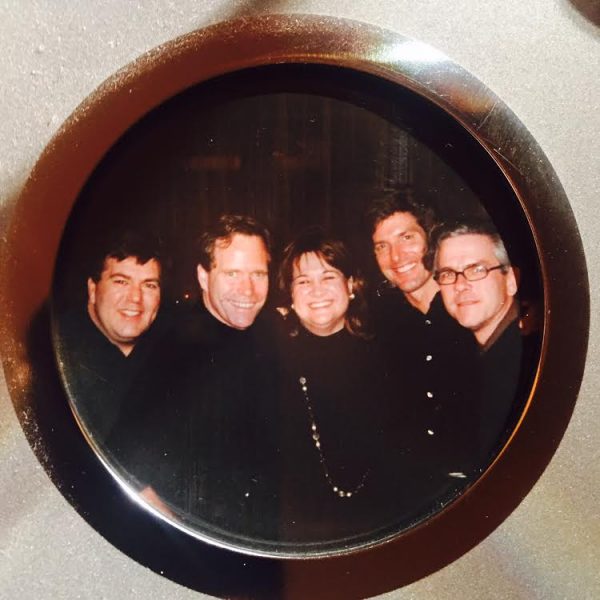 “Kevin Meaney was as funny as they get and the nicest man.  He could make you lose your mind laughing.  A very special person.”
–Judd Apatow

“The sudden passing of my good friend and fellow comedian, Kevin Meaney, has me heartsick.”
–Joy Behar

“Kevin Meaney was on our show and the loveliest man.  So funny and sweet and unforgettable.  So sad.  Rest in Peace.”
–Kat Dennings

“RIP Kevin Meaney. You were insanely funny and an incredibly nice man.  My mother loved you and you were so kind to her.  Tell her I said hi.”
—Paul Feig

“Kevin Meaney was sweet, hilarious, and courageous.  A silly, wonderful man.  The best.  My heart goes out to his fans, friends and family.”
–Bobcat Goldthwait

“Always thought Kevin Meaney was a brilliant comedian.  Then we hung out in Ireland and I found out he was also a terrific person.  RIP.”
–Patton Oswalt

“Dear Kevin Meaney:  You made me love you.”
–Paula Poundstone

In lieu of flowers, donations can be made to
The Trevor Project | www.trevorproject.org 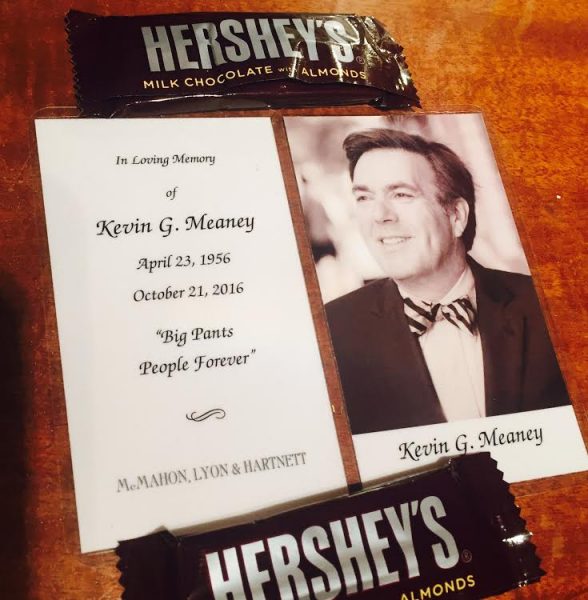 First and only wake we’ve ever attended featuring bowls of candy bars with signs asking, “Would you like a chocoleet?” (a classic Kevin-ism) #housekeeping