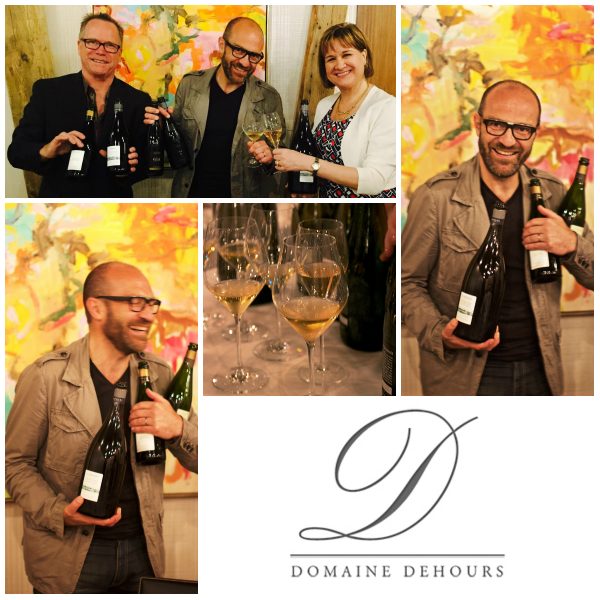 “For me, Meunier is the identity of the domaine.”
—Jerome Dehours, proprietor and winemaker, Domaine Dehours

When naming the grapes of the Champagne region, virtually everyone names Chardonnay first, then Pinot Noir – except, perhaps, those Blanc de Noirs lovers who will mention Pinot Noir before Chardonnay.  But Pinot Meunier is usually the after-thought, the also-ran, the Rodney Dangerfield of Champagne grapes.

To discover a Champagne house that celebrates its elegantly rich and complex Pinot Meunier-driven Champagnes….Well, that doesn’t happen every day.  We didn’t want to miss a chance to taste them, even though we accept only a fraction of the wine tasting invitations we receive, and an even tinier fraction of them when we’re on book deadline, as we are currently with KITCHEN CREATIVITY (Little, Brown; 2017).

Besides, we were sorry to see we already had another commitment during the time of the sit-down tasting scheduled for this morning at one of our very favorite restaurants Gabriel Kreuther — which celebrates its one-year anniversary this week — with third-generation Champagne maker Jerome Dehours on his first-ever visit to New York City.  Could we come a bit later?, we asked.  Of course we’d be welcome then, was the gracious response.

And it definitely turned out to be a case of better late than never.

We loved the Domaine Dehours Champagnes we were able to experience during our belated private tasting, beginning with its three Solera-based blends:  Grand Reserve Brut NV ($60, and 60% Pinot Meunier), Andrew’s favorite Les Vignes de la Vallee Brut NV ($73, and 75% Pinot Meunier), and Karen’s favorite Trio “S” Extra Brut NV ($110), each reflecting increasing levels of richness and extraordinary complexity, not to mention increasingly (to the point of extraordinarily) long finishes on the palate.

And speaking of good timing, Dehours has turned the concept of time into the not-so-secret ingredient behind its nuanced and intriguing Champagnes via its complicated Solera system, which can be as hard to follow as a time-travel trilogy, yet with clear synergies arising through the sum of the parts.  Aging “sur lie” is a major flavor component of these wines, adding to their alluring complexity.

Jerome’s grandfather Ludovic had founded the Dehours estate in 1930, establishing the house as one of the region’s first independent growers.  After Jerome’s father’s untimely passing during Jerome’s childhood, the business was run by a group of financial partners.  In 1996, Jerome assumed his leadership of the family business.

And he’s been expressing his own voice ever since, renewing the house’s focus on sustainability and emphasizing the expression of individual terroirs through his winemaking approach.

Jerome turns out to not be a big fan of flying (and neither is Andrew, for that matter).  So this was only his third visit to the United States (as he’d previously visited northern and southern California), and his very first to New York City.  With four kids at home (the youngest of whom is just eight), he finds it hard to get away.  So he found himself making the most of his first visit to New York City, meeting with his sales team and visiting hot spots like Aldo Sohm Wine Bar, which he especially enjoyed.   You can find his Champagnes on the wine lists of Lincoln, Balthazar, and The NoMad in Manhattan, but they apparently tend to have a hard time keeping them in stock, as their production is so limited.

But it says everything about Jerome’s adventurous spirit that his first visit to the city this week also included a helicopter flight over Manhattan, to get up-close-and-personal with the city’s skyscrapers, rivers, and even the Statue of Liberty.  (Merci encore, France!)

For someone who hates to fly, Jerome Dehours was definitely flying high this week.  And so were his extraordinary Champagnes.  We count ourselves fortunate to have been able to be along for the ride.

Domaine Dehours is located in the Champagne region of France, with the estate comprised of 42 parcels in the villages of Cerseuil, Mareuil-le-Port, Troissy and Oeuilly and Port-a-Binson at the intersection of two valleys, the Marne and the Flagot.  Its website is champagne-dehours.fr.