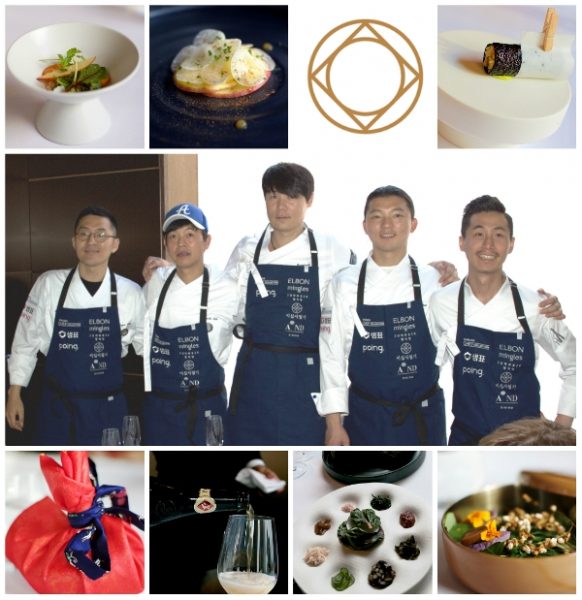 Five of Korea’s best chefs are visiting New York City this week to attend the 2016 “World’s 50 Best Restaurants” announcement taking place Monday, June 13th, and collaborated on a gala dinner last night at Jungsik, the Michelin two-star Korean restaurant in Manhattan helmed by chef Jungsik Yim.  We were delighted to be able to attend, and to meet each of these talented and charming chefs, including:

– host chef Jungsik Yim (who, with namesake restaurants in Seoul and NYC, is seen as the leading force behind modern Korean gastronomy),
– Mingles chef Mingoo Kang (whose cuisine at Korea’s #1 ranked restaurant in 2015 is noted for its deft balance of Korean and Western influences),
– Elbon The Table chef Hyun-Seok Choi (whose daring style and TV presence is said to have been credited with enhancing the perception of chefs’ masculinity in Korea),
– 24 Seasons chef Tony Yoo (who is strongly influenced by traditional Korean temple cuisine), and
– A&ND Dining chef Jinmo Jang (who fuses Italian and Korean influences).

You can read more about each of them as well as the Seoul-based gourmet magazine La Main that sponsored last night’s dinner here. 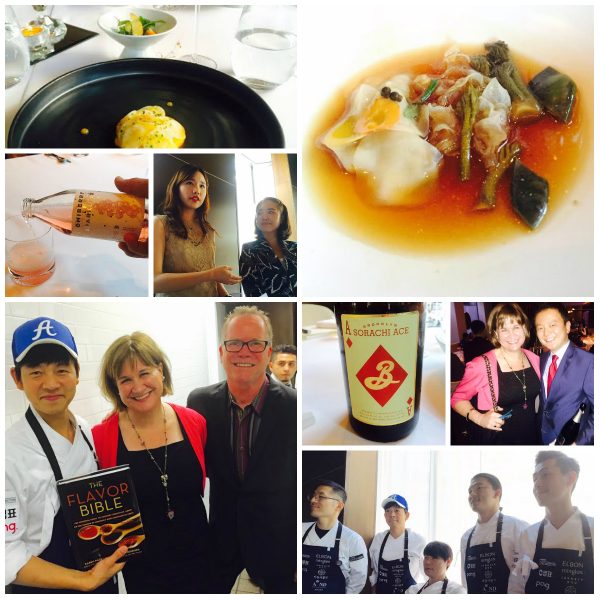 We’d long been looking forward to visiting Jungsik, since it opened a few years back in the Tribeca space formerly occupied by Karen and David Waltuck‘s renowned restaurant Chanterelle.  And we’d recently received an email from chef Mark Miller, alerting us both to last night’s dinner (to which he had no idea we’d already accepted an invitation) as well as to the extraordinary dinner he’d enjoyed at chef Mingoo Kang‘s restaurant Mingles in Seoul.  Mingles debuted on the 2016 Asia’s “50 Best Restaurants” list at #15, a remarkable accomplishment for so young a restaurant.

While the set menu for the multi-course dinner featured dishes that included crickets, sea urchin, and pork belly, the chefs didn’t miss a beat in accommodating our inquiry about vegetarian versions of the dishes.  We were fascinated by every one of them, and loved several of them — appreciating the well-chosen beverage pairings, which ranged from Billecart-Salmon Champagne to Sol Song Ju rice wine to Brooklyn Brewery “Sorachi Ace” beer to Omiberry Berry Sparkling.

The yuja dessert seemed as big a hit with everyone else as it was with us:  This gorgeously realistic-looking citrus fruit — known as yuzu in other parts of Asia — had a white chocolate shell that could be cracked to reveal its refreshingly tart and creamy insides, as delicious as the outside was beautiful. 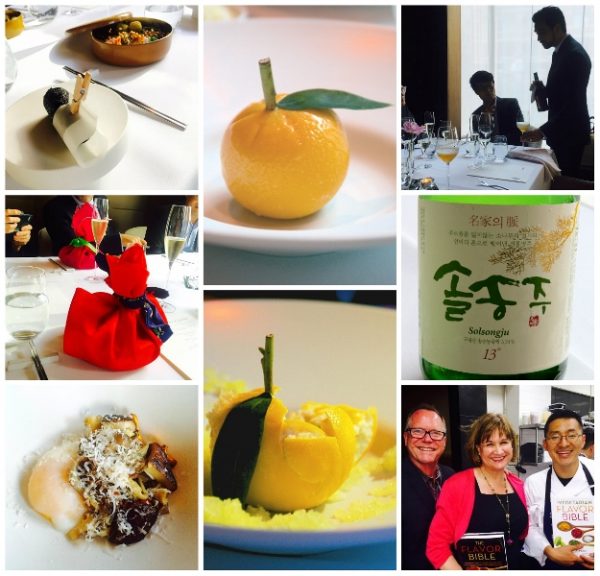 It was fun running into New York chefs David Burke and Michael Anthony (accompanied by his lovely wife Mindy Dubin), and Chicago TV host Steve Dolinsky (who may have won more James Beard Awards than anyone else in history) and meeting two of Karen’s fellow Northwestern alumni:  Jungsik sommelier Haksoo Kim, and Korea JoongAng Daily reporter Summer Lee.  And we were surprised when the chef of the top-ranked restaurant in Korea Mingles, Mingoo Kang, told us that he’d bought a copy of our book THE FLAVOR BIBLE on a prior trip to the United States right after it was published — and that it was trashed from being put to so much use.  (Never fear:  We ended up gifting him with a copy of THE VEGETARIAN FLAVOR BIBLE.)

The 2016 list of The World’s “50 Best Restaurants” will be announced on Monday, June 13th, and will be live streamed starting at 8 pm ET here.  Whether or not the five chefs we had the pleasure of meeting last night hear their restaurants among those whose names are announced then, they should all be rightly proud of the excellent job they did showcasing modern Korean gastronomy that is leagues beyond the kimchi and bulgogi that is many Americans’ first exposure to Korean flavors.  They’ve definitely whet our appetites to experience and learn more.

Mingles restaurant is located in Seoul, Korea, and at restaurant-mingles.com.

Elbon The Table is located in Seoul, Korea, and at elbonthetable.com.

24 Seasons restaurant is located in Seoul, Korea, and at cheftonyyoo.com.

La Main is the Korean gastronomy magazine located at lamain.kr.