Inspiration Via Rejection: JK Rowling Shares Her Rejection Letters, As We Did During Our 2014 IFBC Keynote 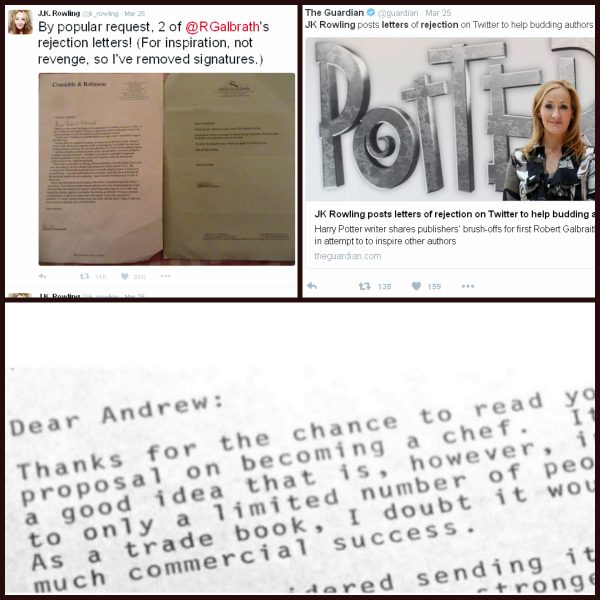 Top: Billionaire author JK Rowling shares some of the rejection letters she’s received via Twitter, prompting global media coverage; Bottom: An excerpt from one of dozens of rejection letters we received for our first book BECOMING A CHEF

In a Tweet heard ’round the world, on March 25, 2016, billionaire author JK Rowling posted some of the rejection letters she’d received for a novel she’d submitted under a pen name.  Would-be authors rejoiced via countless Tweets of their own, sharing the hope and inspiration they found in learning that editors had advised the author to take a writing course. Rowling’s first Harry Potter book had been rejected by 12 publishing houses in a row before finally receiving an offer.

When we were asked to keynote the 2014 International Food Bloggers Conference held in Seattle that September, we’d wondered how we could best inspire the hundreds of writers gathered in the ballroom — and decided to share excerpts from some of the rejection letters we’d received for our first book BECOMING A CHEF.  We’ve joked (though we didn’t find it at all funny while it was happening in 1992) that we’d received a quantity so voluminous that we could have wallpapered our apartment with them.

In another tweet posted this March 25th, JK Rowling recalled, “I wasn’t going to give up until every single publisher turned me down, but I often feared that would happen.”

As we were shopping our book proposal in 1992, we felt exactly the same.  The common theme of the rejections we were receiving was that we were sadly mistaken in believing there to be a sizeable audience for books by, about, and for professional chefs.

Keep in mind that Karen was a newly-minted Harvard MBA who had done extensive research on the size of the market, sharing with prospective publishers that the chef’s profession had been named one of the top 10 careers for the 1990s in terms of projected growth in the U.S. Occupational Outlook Handbook compiled by the Bureau of Labor Statistics.

So, armed with that knowledge, we — like JK Rowling — weren’t about to give up without a fight, either.  And it paid off, resulting in a book that went on to sell more than 100,000 copies and to be recognized as a groundbreaking classic that inspired and/or informed many influential chefs and cooks, including Alton Brown, Chris Cosentino, Graham Elliot, Christine Ha, Jeff Henderson, Michael Laiskonis, David Lebovitz, Michael Ruhlman, and Emily Kaiser Thelin.

Dianne Jacob, author of the book Will Write for Food and host of a blog of the same name, contacted us this year about the rejection letters we’d shared during our IFBC keynote and interviewed us via email about those early rejections.  That interview appears this week on her website in her article “Rejection Made Two Big Authors Stronger,” which you can read here. 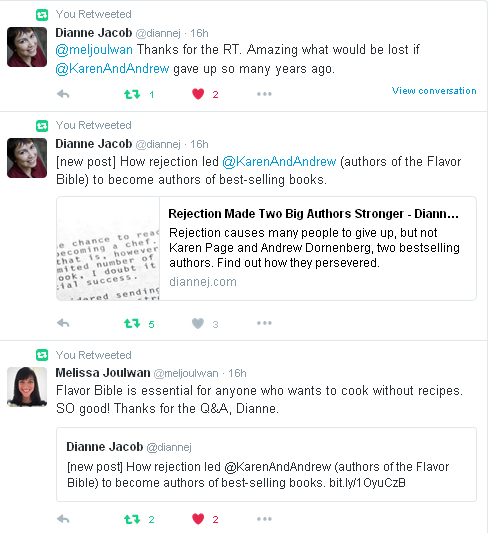 We’re happy her new post is already being Tweeted about — including Dianne’s own musing, “Amazing what would be lost if @KarenAndAndrew gave up so many years ago.”

Hmmm….Interesting. Let’s think about that for a second….

While our first book BECOMING A CHEF — which, like the first Harry Potter book, was rejected by a dozen-plus publishers — did not turn us into billionaires, it did go on to inspire and/or inform countless other books (including our own and others’), articles, and scholarly research across North America and around the globe — among them:

“Many fine studies do remain this restrictive, including Dornenburg and Page’s (1998, 2003) fascinating books on chefs, food critics, and restaurants….The value of this descriptive work is indisputable.”
–Linda Kalof and Amy Dan, Essentials of Social Research (2008)

“A Brief History of Culinary Arts Education in America” by J.N. Brown (Journal of Hospitality & Tourism Education, 2005).  Citation of Becoming a Chef.

Accounting for Taste: The Triumph of French Cuisine by Priscilla Parkhurst Ferguson (University of Chicago Press, 2004). Citation of Becoming a Chef.

“An Analysis of Determinants of Career Success for Elite Female Executive Chefs” by P.S. Bartholomew and J.G. Gary (Journal of Hospitality & Tourism Research, 1996).  Citation of Becoming a Chef.

“A Study of the Evolution and Diversity of a Stereotypical Genre: The Recipe Genre” by Shirley Poon Ka-man (The University of Hong Kong, 2007).  Citations from Becoming a Chef.

“Daniel Boulud, the chef-owner of Restaurant Daniel, Café Boulud, and DB Bistro Moderne in New York City, states that, ‘many recipes are written by chefs before the dishes are ever made, because they’re created in your mind. Your senses give you the combinations.’ (Dornenburg & Page, 2003:186). Jeremiah Tower also suggests that ‘when you write a recipe, you can taste it in your mind’ (ibid).”
–“A Study of the Evolution and Diversity of a Stereotypical Genre: The Recipe Genre” (2007)

A Survival Guide for Culinary Professionals by Alan Gelb and Karen Levine (Cengage Learning, 2004). Citation of Becoming a Chef.

Authenticity in the Kitchen:  Proceedings of the Oxford Symposium of Food and Cookery – 2005 edited by Richard Hosking (Oxford Symposium, 2006).  Citations of Becoming a Chef.

“Dornenburg and Page recount the lobbying effort that followed the Clintons’ announcement that they wanted the official residence to be a showcase for American art; many of the leading chefs of the country wrote an open letter to the Clintons urging the adoption of American cuisine in the nation’s kitchen.”
—Authenticity in the Kitchen (2006)

A Woman’s Place Is in the Kitchen: The Evolution of Women Chefs by Ann Cooper (Van Nostrand Reinhold, 1997). Citation of Becoming a Chef.

“She made her choice to pursue a culinary career well after her children were born.  She explains that the inspiration for her decision was Karen Page and Andrew Dornenburg’s book BECOMING A CHEF.  That book awakened something in her that told her she needed to go to culinary school and follow her heart.”
—A Woman’s Place Is In the Kitchen (1997)

Behind the Scenes: An Ethnographic Study of A Working Kitchen by Sara Anne Stephenson (University of York, 2012).  Citation of Becoming a Chef.

The Blue Bistro by Elin Hilderbrand (Macmillan, 2006). Citation of Becoming a Chef.

“I read comprehensively about restaurants, culinary schools, and food and wine.  The following publications were especially helpful…BECOMING A CHEF by Andrew Dornenburg and Karen Page.”
–Elin Hilderbrand, in the Acknowledgments to her novel The Blue Bistro (2006)

“Burned! The Impact of Work Aspects, Injury, and Job Satisfaction on Unionized Cook’s Intentions to Leave the Cooking Occupation” by C.A. Young and D.L. Corsun (Journal of Hospitality and Tourism Research, 2009).  Citation of Becoming a Chef.

Career Opportunities in Travel and Hospitality by Jennifer Bobrow Burns and Joseph A. McInerney (Ferguson, 2010). Citation of Becoming a Chef.

Cooked: From the Streets to the Stove, From Cocaine to Foie Gras by Jeff Henderson (2007). Citation of Becoming a Chef as an inspiration to the author of this bestselling memoir, who has credited Page and Dornenburg with catalyzing its publication.

“I wanted to thank you two again for your inspirational book BECOMING A CHEF that I read while incarcerated…After you wrote about me in your newsletter last year, [literary] agent Michael Psaltis…read your testimony.  He contacted me [and] the rights to my life story were sold to William Morrow/Harper Collins for a substantial six figures.”
–Chef Jeff Henderson, author of the New York Times bestseller Cooked (2007)

Cooking Dirty: A Story of Life, Sex, Love and Death in the Kitchen by Jason Sheehan (Macmillan, 2010).  Citation of books by Dornenburg and Page “for inspiration.”

Cool Careers for Girls in Food by Ceel Pasternak and Linda Thornburg (2001). Citation of Becoming a Chef.

Cool Careers Without College for People Who Love Food by Kerry Hinton (2009). Citation of Becoming a Chef.

Culinary Fictions: Food in South Asian Diasporic Culture by Anita Mannur (Temple University Press, 2009). Citation of the definition of “fusion cuisine” from Becoming a Chef, which is also listed in the book’s Bibliography.

“…No longer were chefs mere glorified household servants, but they could now aspire to commanding spaces of their own making, spaces with an international visibility that Escoffier had helped secure for French haute cuisine (Dornenburg and Page, 2003).”
—Cultural Analysis and Bourdieu’s Legacy (2010)

“A Cultural Field in the Making:  Gastronomy in 19th Century France” by Priscilla Parkhurst Ferguson (American Journal of Sociology /The University of Chicago Press, November 1998).  Citation of Becoming a Chef.

“Michael [Fiorelli] aspired to be a writer for ‘Saturday Night Live,’ which was at the top of the ratings at the time, but then his passion for reading turned to cookbooks and he never looked back.  Michael still recommends two of the books that affected him the most to aspiring chefs to this day:  CULINARY ARTISTRY and BECOMING A CHEF, both by Andrew Dornenburg and Karen Page.”
—Eat Ink (2013)

Eggs in Cookery:  Proceedings of the Oxford Symposium of Food and Cookery – 2006, edited by Richard Hosking (Oxford Symposium, 2006).  Citation of Becoming a Chef in “The Ultimate in Cookery:  The Souffle’s Rise Alongside Feminism in the 1960s” by Phyllis Thompson Reid.

“Pastry is an interesting exception to the gender rule.  Because baking isn’t tied to the service of the restaurant, it can begin and end earlier in the day, and is more predictable in its hours (Dornenburg, BECOMING A CHEF).  This makes it a more family-friendly niche.”
–Oxford Symposium (2006)

Emeril!: Inside the Amazing Success of Today’s Most Popular Chef‎ by Marcia Layton Turner (John Wiley & Sons, 2004). Citation of Becoming a Chef.

Essentials of Social Research by Linda Kalof and Amy Dan (McGraw-Hill, 2008).  Citations of Becoming a Chef and Dining Out.

The Everything Hot Careers Book by Ronald A. Reis (Adams Media, 2001).  Citation of Becoming a Chef.

Extraordinary Jobs in the Food Industry by Alecia T. Devantier and Carol Turkington (2006).  Citation of Becoming a Chef.

You get the picture.  (Or if not, you can find plenty more here.)

That’s exactly why we feel so passionate about urging talented would-be authors to persevere.  The world needs to move forward.  It needs your better judgment, when you happen to have it.  So, when you know deep in your soul that you’ve hit upon a great idea, fight for it!  Great ideas need and deserve your strongest fight to bring them into the world.

Besides, no matter how many times a book is rejected, all it takes is one “yes” for that book to be able to start changing the world.

Dianne Jacob, author of Will Write for Food, blogs at diannej.com.