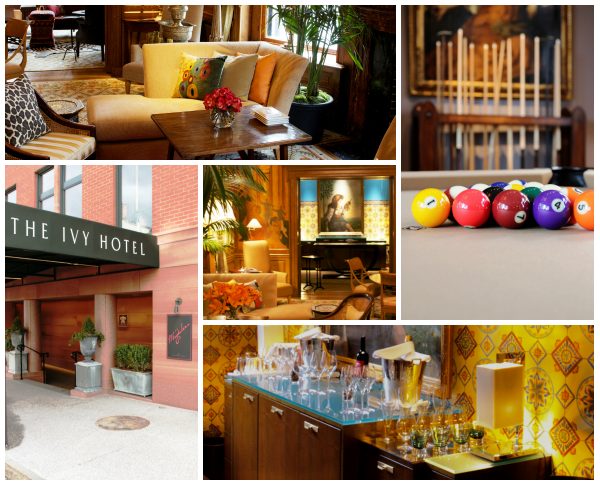 The stunning Ivy hotel in Baltimore, which opened in the summer of 2015, most deservedly joined the ranks of the exclusive Relais & Chateaux organization a few months later 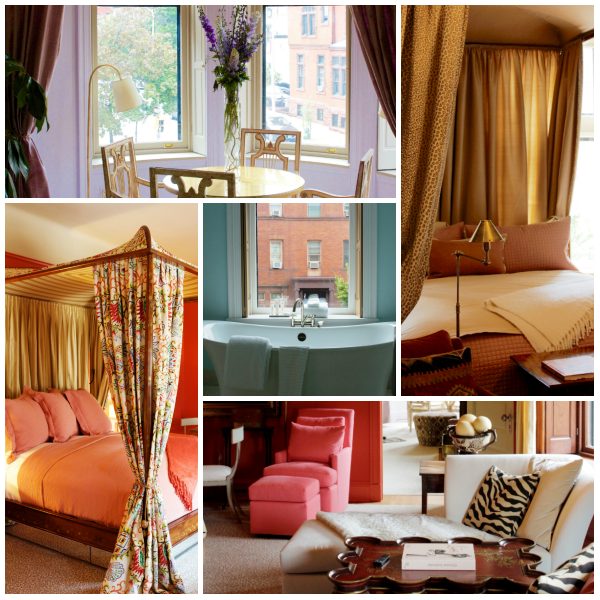 Each room at The Ivy is unique (and very romantic), with many featuring canopy beds, sunken tubs, and fireplaces

“Executive Chef Mark Levy’s team is thrilled to cook on a custom made French Molteni range that is a work of art in itself….[S]it in the Ivy’s Library with a book, over a cup of tea or afternoon wine, and you may just find yourself never venturing out.”
–John Oseid, Forbes

“For this anglophile, full afternoon tea service with finger sandwiches and scones in front of a roaring fire was the highlight of my stay. My history-buff husband, on the other hand? He could have spent days exploring the hotel’s collection of antiques including vintage books, a 1930s-era globe, 19th-century pool table, and restored Tiffany glass windows.”
–Caroline Hallemann, Travel & Leisure

“Dinner at Magdalena, the restaurant in the newly opened Ivy Hotel, is gorgeous. The space, the drinks and the food come together to create one of the loveliest dining experiences Baltimore has to offer.”
–Kit Waskom Pollard, The Baltimore Sun

A week ago today was one of the best food days of our lives.

We’d been traveling through the Mid-Atlantic region last week to attend a conference and to conduct interviews and photo shoots for our next book KITCHEN CREATIVITY (Little, Brown; 2017), which picks up where our books CULINARY ARTISTRY and THE FLAVOR BIBLE left off in exploring the subject.

Last Sunday morning, we kicked off the day touring the Dupont Circle FRESHFARM Farmers Market in Washington, DC, with Chef Jose Andres (of ThinkFood Group, whose restaurants include Cafe Atlantico, China Chilcano, Jaleo, minibar, Zaytina, et al) before returning to his home in Maryland for a long conversation and a brilliant homecooked midday meal.  From there, we drove to The Inn at Little Washington in Virginia to talk with Chef Patrick O’Connell, and where the pièce de résistance of our extraordinary dinner at the Inn that night was one of the best vegetarian dishes of our lives:  an exquisite morel mushroom “meatloaf.”

Holding its own during this amazing trip was our dinner at Magdalena at The Ivy hotel in Baltimore.  After eating our way through the Mid-Atlantic this past year and finding each of our multiple dinners here a stand-out, we believe Magdalena merits a high ranking on any list of the best restaurants not only in Baltimore, but in the greater Washington, DC area. 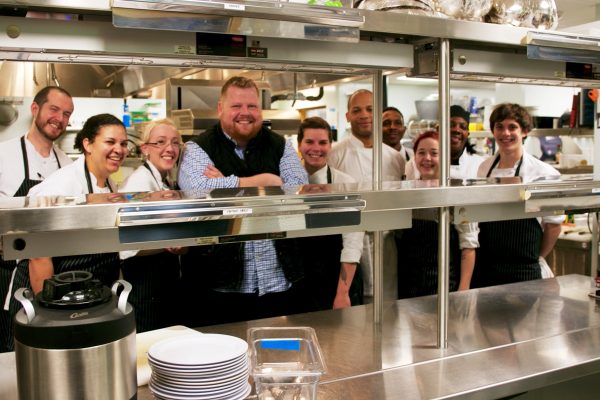 Chef Mark Levy (center, formerly of The Point) with his #2 Emmanuel West and the rest of the kitchen staff of Magdalena at The Ivy, where the entire team is as nice as they are talented (which is to say, extremely)

Britain-born chef Mark Levy previously headed the kitchen at the uber-luxurious resort The Point in Saranac Lake, New York (the former Adirondacks home of William Avery Rockefeller), where we first learned of his impressive talents.  We were delighted to have the opportunity to visit The Ivy and dine at Magdalena while celebrating our 25th wedding anniversary last August (when we were enchanted by The Ivy’s exquisite service, overseen by gracious General Manager Rob Arthur), and were even more impressed after tasting the tasting menu Mark thoughtfully composed for the occasion. 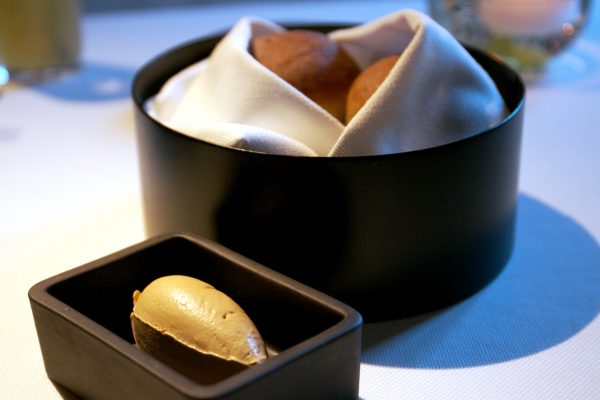 Bread service at Magdalena at The Ivy in Baltimore

One of our favorite bread courses in America (up there with Bouley‘s incomparable bread cart, whose gluten-free bread is as irresistible as its glutinous offerings), Magdalena offers signature flavored house-baked rolls (which we think of as a crusty cross between a popover and a Parker House roll) and butter pairings, which change regularly.  Mark has been known to pair miso rolls with a sweet soy butter, beet rolls with horseradish butter, and duck fat poppy seed rolls with truffle butter.  This time, Magdalena’s bar raised the bar for bread-course synergy another notch by pairing our Chinese five-spice rolls and soy-flavored butter with a yuzu-noted mocktail that enhanced both. 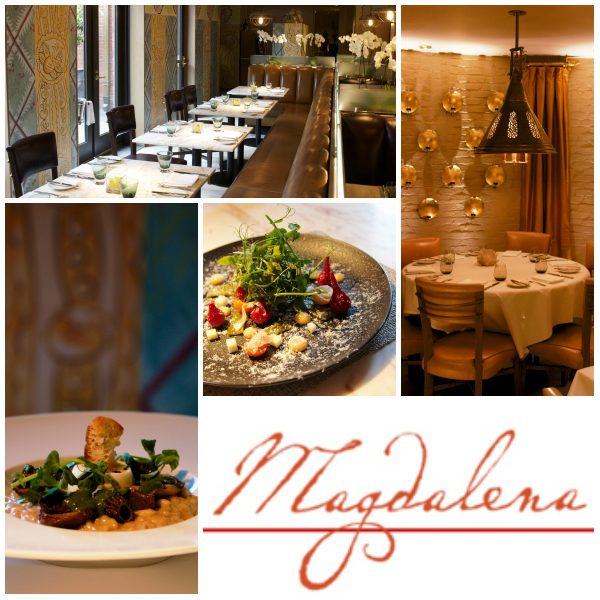 Magdalena’s dining rooms range from an informal bistro along the window to a formal dining room, with inventive dishes passionately prepared from the very best ingredients available

Our compliments on Mark’s risotto led to a long discussion about his sourcing of an aged rice that boasts unusual nuttiness and flavor complexity — and which we loved so much we ordered some the next day to have waiting for us by the time we arrived home in Manhattan.

For the past 20 years, Baltimore has been home to our favorite museum in America:  the American Visionary Art Museum, founded by Executive Director Rebecca Hoffberger in 1996, which we’ve been telling friends and anyone else who will listen is a must-visit.  Last year, chef Spike Gjerde (whom we also had the pleasure of interviewing this week) of Woodberry Kitchen — which Washington Post restaurant critic Tom Sietsema has referred to as “the Chez Panisse of our region” — made history as the first Baltimore chef to take home a James Beard Foundation Award as the 2015 Best Chef: Mid-Atlantic.

The Ivy’s overnight guests can have a sumptuous breakfast served to them in the morning that might include poached eggs with hollandaise, a breakfast panna cotta with fresh fruit, Southern-style grits, or rich, crisped potato cake

So we’re thrilled to have yet another reason to be excited to return to Baltimore.  For years, we’d drive instead of fly or train to Boston so that we could stop for dinner at Al Forno in Providence every time.  Now, we feel similarly about Magdalena in Baltimore.  We can’t wait to taste our way through Chef Mark Levy’s new afternoon tea menu at The Ivy as well as his dinner menu’s evolution at Magdalena, confident it will lead to more great food days ahead.

Magdalena is at The Ivy Hotel, serving dinner Tuesday through Saturday, with complimentary valet service.  As of Spring 2016, it is also offering afternoon tea service (which is complimentary for hotel guests) Thursday through Sunday, with reservations required.  Reservations via OpenTable.com or by phone at 410.514.0303. magdalenarestaurant.com

The Ivy Hotel is an 18-room (nine of which are suites) luxury boutique hotel located in a refurbished 125-year-old historic property (“designed to feel like a friend’s private mansion,” according to the owners), and a member of the prestigious Relais & Châteaux organization, located at 205 E. Biddle Street in Baltimore.  Room prices (which start at $500+/night) include complimentary afternoon tea, cocktail hour, late-night menu, and breakfast, as well as limo service and gratuities.  410.514.6500.  theivybaltimore.com