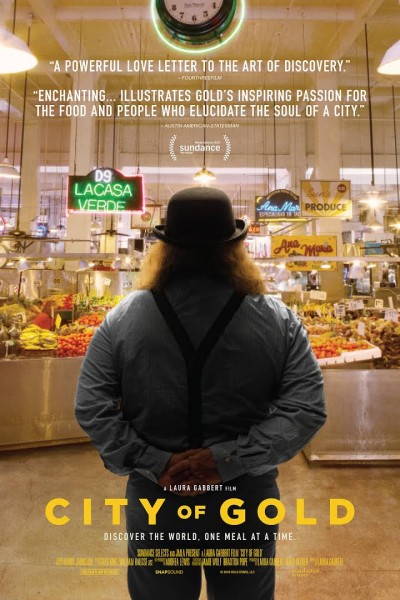 “I like to think of my subject as Los Angeles, and that I write about it through food.”
—Jonathan Gold, as quoted in our 1998 book DINING OUT

“To find interesting, out-of-the-way restaurants in Los Angeles, Jonathan Gold, restaurant critic for Los Angeles and LA Weekly, drives around twice a week.  ‘I try to cover every major street in the county every four months, to see what’s open,’ he says.  ‘It’s as much a culture column as it is anything else.  And it’s really interesting to see there are little Korean neighborhoods that didn’t exist six months before, or to see a neighborhood grow from one Cambodian store into three Cambodian grocery stores and a restaurant, or to see certain Mexican neighborhoods in East Los Angeles get sleeker and more upscale.  It’s amazing.  You get this picture in your head of a living, breathing city, and you try to get to know every part of its fabric.'”
—Andrew Dornenburg and Karen Page, in our 1998 book DINING OUT

Twenty years ago, having finished our second book CULINARY ARTISTRY and having subsequently become obsessed with the subject of restaurant criticism, we had three major food fantasies:

And now all three have come true.

1) We had the pleasure of eating out with — and interviewing — Jonathan while we were researching our award-winning book DINING OUT (Wiley, 1998).  (We also subsequently shared a bottle of wine in Napa Valley with Gold and his talented wife Laurie Ochoa, Los Angeles Times Arts and Entertainment Editor.)

“At restaurants that are not looking to make a name for themselves, few people are on the lookout for a critic.  We met Jonathan Gold for lunch at Yazmin, a Malaysian restaurant in Los Angeles where we had to walk by a huge, framed review with his byline on it before passing through the dining room.  ‘This place is one of my favorites,’ Gold told us.  ‘I’ve written about it a lot, and I have at least one piece in the window, maybe two.  They don’t have any idea who I am, do they?  (They clearly didn’t.)”
—Andrew Dornenburg and Karen Page, in our book DINING OUT

While our two prior books in the emerging “chef-as-celebrity” era had focused on chefs themselves, DINING OUT finally acknowledged the rising celebrity of those who made their living critiquing chefs’ efforts:  restaurant critics.   We interviewed and dined with dozens of them, all across America.

“The Pulitzer Prize‘s self-described function is ‘documenting 80 years of American intellectual and artistic excellence in journalism, letters, drama, and music.’  There is an annual award for distinguished criticism, which has historically been awarded to critics of music, books, architecture, television, art, theater, film, and dance.  As of 1998, it has never been awarded to a restaurant critic.”
—Andrew Dornenburg and Karen Page, in our 1998 book DINING OUT

At the time, we believed that there were some whose writing elevated the art of restaurant criticism to another level, exemplified by the level of writing of the three Pulitzer Prize-winning critics of other disciplines we interviewed for and featured in our book DINING OUT:

One of the critics we believed was elevating restaurant criticism to a level deserving of Pulitzer consideration was Ruth Reichl*, whose reviews for The New York Times were marked by social and cultural commentary as well as gastronomic insight, and whom we featured on DINING OUT‘s cover.

The other was Jonathan Gold.

(*When we told Ruth of our intention to enter her reviews for the Pulitzer, she asked us not to — so we learned the lesson that in some cases it’s better to ask for forgiveness than permission or, better yet, to ask for neither.)

2)  In 2007 — less than a decade after DINING OUT‘s publication — a restaurant critic was finally awarded the Pulitzer Price for Criticism.  We’re delighted that the first recipient was Jonathan Gold.

Yesterday marked the opening of “City of Gold,” a new documentary about Jonathan.

3)  Nearly two decades after first hearing Jonathan Gold’s description of driving through the streets of Los Angeles so diligently as key to the process of identifying worthy newcomers on the restaurant scene, we were personally thrilled that director Laura Gabbert gave form to the fantasies inside our heads about spending time driving those streets with Gold via her excellent documentary “City of Gold,” which we viewed at a press screening on February 23rd and which opened to limited theatrical release yesterday.

For allowing the creation of — and creating — this documentary that made our “final fantasy” come true, we thank you, Jonathan and Laura! 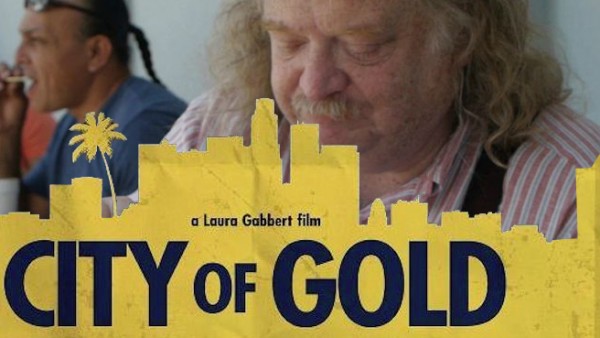 P.S.  “City of Gold” has been winning many positive reviews, including from:

Jonathan Gold will ask himself certain questions when making his evaluation. “Are the flavors clear?  Strong?  Are the ingredients fresh? Is it something you want to eat?  A well-cooked piece of fish is a well-cooked piece of fish whether it’s at a Cambodian restaurant or at Campanile,” Gold explains.  “But there’s a Cambodian method of cooking fish called haomuk, which steams the fish until it’s essentially the consistency of pudding, which would obviously be a flaw if you had it someplace else.  So when you’re reviewing restaurants of any kind, you’ve got to figure out what the restaurant is about and what the chef is trying to do — and then hold them to their own standards.” 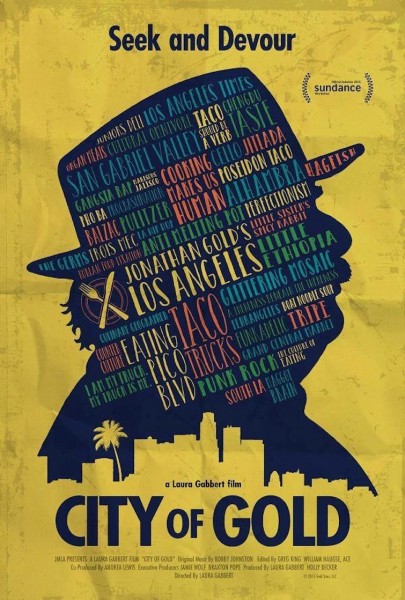 “City of Gold” is a 2015 documentary directed by Laura Gabbert on Pulitzer Prize-winning restaurant critic Jonathan Gold. It features commentary from a number of notable food experts, including radio host Evan Kleiman and author Calvin Trillin, as well as restaurant critics such as Ruth Reichl and Robert Sietsema, both of whom were also featured in DINING OUT.

We’ve never met Reuters’ Sue Horton, but found that her analysis of Gold’s effective use of the second person to draw readers in and “bring you to his table” nailed one secret to Gold’s widely admired writing style.  And we felt compassion for Jonathan’s environmentalist brother Mark Gold who lamented that “Jonathan’s eating everything I’m trying to save” before persuading Jonathan to give up shark’s fin soup.  Jonathan finally penned an essay on his newfound intolerance for “the bitter taste of extinction,” which Mark credited as a critical aspect of the campaign to pass a bill outlawing it.

The official trailer for “City of Gold”:

Subscribe to our channel: http://goo.gl/Etb1I3 Watch the trailer for City of Gold – a richly penetrating documentary odyssey about Pulitzer Prize-winning food critic Jonathan Gold from director Laura Gabbert – coming to cinemas in 2016. Jonathan Gold shows us a Los Angeles where ethnic cooking is a kaleidoscopic portal to the mysteries of an unwieldy city and the soul of America.