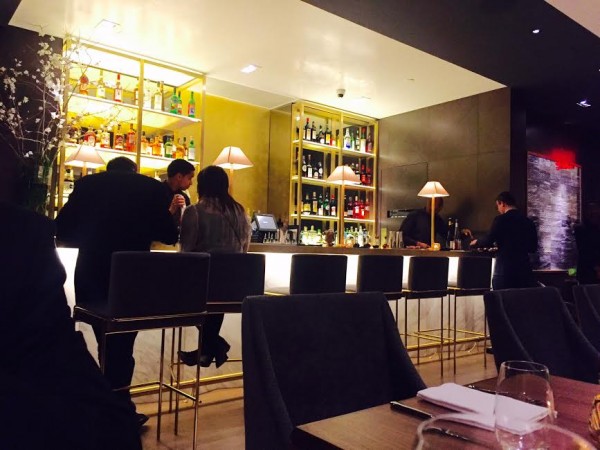 Early last night at the bar at Indian Accent in Manhattan

“This luxurious but ultra-contemporary restaurant, set within New Delhi’s upscale The Manor hotel, offers arguably the most creative cooking on the sub-continent. Trained at Mumbai’s prestigious Institute of Hotel Management, charming chef-patron Manish Mehrotra is increasingly acknowledged as a pioneer both at home and on a global scale. His cooking is an eclectic marriage of world food and Indian culinary philosophies that results in wacky-sounding but sublime, intelligent dishes.”
–The World’s 50 Best Restaurants website, describing Indian Accent, the San Pellegrino “Best Restaurant in India”

After Karen earned her master’s degree at Harvard in 1989, we were married in Boston the following year.  Today, neither of us can think of a single Indian restaurant we miss in Boston from those years.  Instead, Karen consoled herself with fond memories of 1980s-era Indian dinners in Manhattan at the likes of Madras Woodlands.

Moving to New York City together in 1992, we discovered new favorites, like the Madhur Jaffrey-affiliated Dawat, which we loved so much we once chose it for our Christmas dinner.  As the years passed, New York’s restaurant scene delighted us with new takes on Indian flavors — like those of the late chef Raji Jallepalli (whom we interviewed for our first book BECOMING A CHEF), who has been credited with originating the fusion of classic French and Indian cuisines, taking Memphis by storm at Restaurant Raji which she opened in 1989 before going on to serve as executive chef of 2001 upstart Tamarind.  Floyd Cardoz also made a splash with his inspired cuisine at Tabla, which Danny Meyer‘s Union Square Hospitality Group opened in 1998 and earned three stars from Ruth Reichl in The New York Times.

By the time restaurant critic Gael Greene invited us to join her for dinner at the brand-new Indian restaurant Amma in 2003, our palates could recognize the brilliance of the cuisine of co-chefs Suvir Saran and Hemant Mathur.  We weren’t at all surprised that the pair would be the ones to open Devi, the first Indian restaurant in America to earn a Michelin star (in 2003).

Hemant left to open Tulsi in 2011 in Midtown East, which he subsequently left last year to take over six Indian restaurants including Curry Hill’s Haldi — where it’s unusual for us to go a week without eating, especially given that Haldi’s irresistible $13 unlimited lunchtime menu may be the single best value in Manhattan — while Suvir announced plans to open his own Indian restaurant in San Francisco. 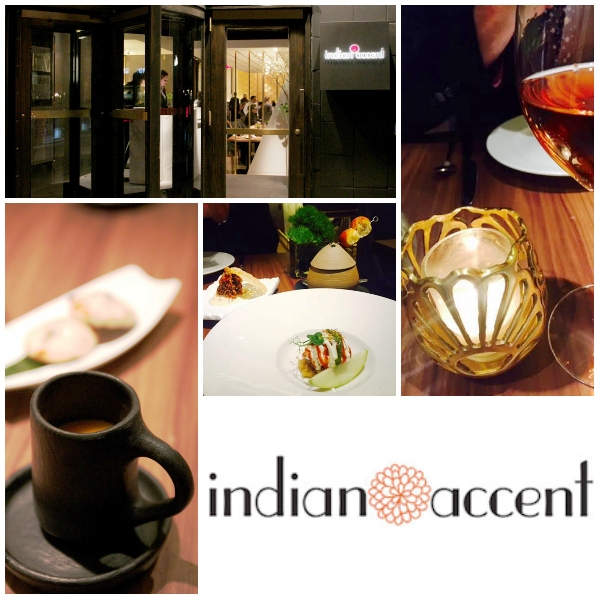 As lovers of Indian food, we’re always excited to learn that another promising Indian restaurant will be opening in New York City.  Our Indian-friend-with-Texas-roots ayurvedic consultant Tina Shah gets credit for first telling us to keep an eye out for Anita Jaisinghani‘s forthcoming restaurant and bakery Pondicheri, while it seems all of New York is already abuzz about Cardoz’s Paowalla, both of which are due to open later this year. But we were especially excited to hear that one of the very best restaurants in India would be opening an outpost in Manhattan this year. 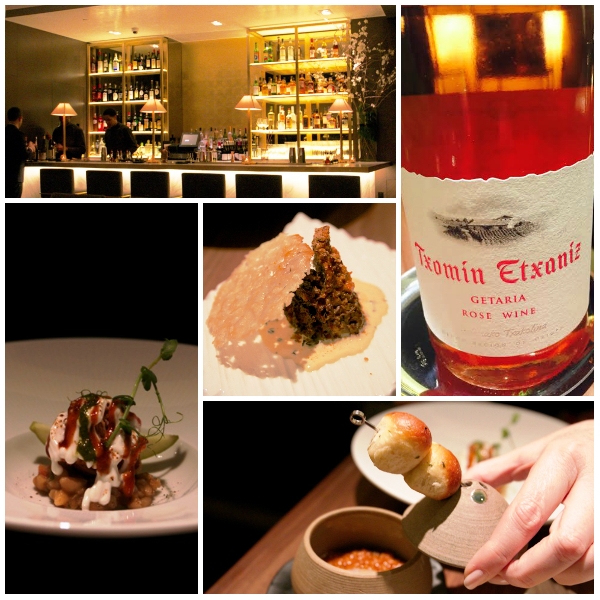 And having dined there last night on its second night in business, we’re even more excited that Indian Accent is now a part of Manhattan’s restaurant scene, as it promises to take its own place among the pantheon of the city’s best Indian restaurants.

Our first bite was a naan the size of a silver dollar, stuffed with blue cheese.  Wait — what?  We sat up a bit straighter, realizing that this dinner was not likely to resemble any other Indian-inspired dinner we’d ever had.  And, indeed, it did not. 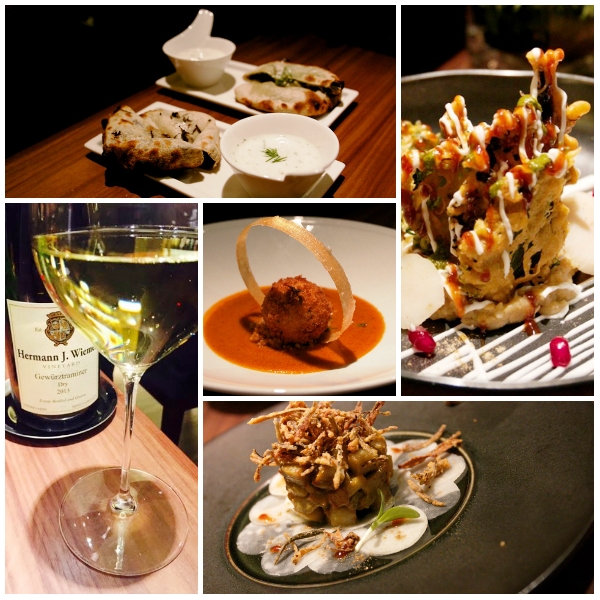 We loved the flavors and found many of the dishes to offer appealing twists on the classics, while others amused with their unusual inventiveness.  We loved the carefully-chosen wine list, enjoying the 2013 Hermann J. Wiemer Gewurztraminer from New York’s Finger Lakes region so much as an accompaniment to these dishes that we ordered a second glass.  And we loved the aromatic Copper Cup cocktail that April insisted we sample, complete with its fascinating back story.

That’s not to say our dinner was flawless.  As would be expected of any restaurant open for fewer than 48 hours, early in the evening we noted some staff members still finding their way — tripping on a table leg, or trying to remove a plate we hadn’t finished with yet.  And were certain dishes meant to arrive at our table room temperature or even cold? Some yes, while others apparently not.

However, on balance, it was a thrilling experience.  And what makes us confident that Indian Accent will continue to elevate its efforts is the caliber of the team they have assembled.  Clearly Chefs Manish Mehrotra and Vivek Rana are gifted in conceiving of and executing new ways to delight those of us who love Indian flavors.

And as dinner progressed last night, we kept seeing familiar faces pop up.  We couldn’t place Yasir until he mentioned he’d previously worked with Terrance Brennan at the now-shuttered Picholine, long one of our favorite restaurants, and with Craig Shelton at The Ryland Inn.  And wasn’t that Phil, the Picholine alum we last spotted at Aldo Sohm Wine Bar?  Indeed it was.  From where did we recognize our lovely and personable sommelier April?  Ah, yes, she is an alum of The Modern (and Juni).  And April introduced us to Daniel Beedle, the restaurant’s wine director (and an alum of Betony), who was recognized in Wine Enthusiast‘s “40 Under 40” feature.

The next thing we knew, we were talking with the GM – Operations & Development for Indian Accent restaurants globally, Akshay Tripathi, and Indian Accent’s owner Rohit Khattar, both of whom seemed genuinely interested in our feedback and appeared 110% committed to ensuring guest satisfaction.

Any company leadership able to assemble a team of all-stars like these, with a seemingly sincere interest in making sure that everyone in their dining room leaves happy, is surely on track for a steady rise through New York City’s restaurant firmament.  (Indeed, we ran into the acclaimed restaurant Annisa‘s chef-owner Anita Lo as she was leaving last night, sharing the highest of praise for the dinner she’d just enjoyed.) 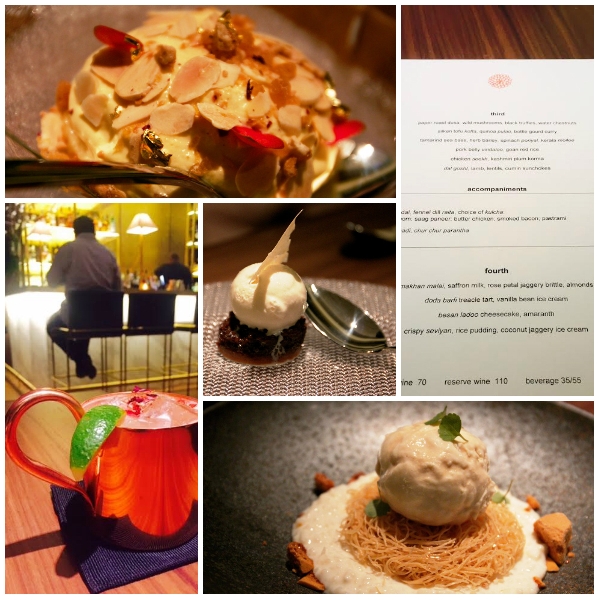 Top left: One of the lightest desserts we’ve ever tasted, Makhan Malai is an eggless “souffle” made with saffron milk complemented by rose petal jaggery brittle with almonds, based on a traditional and cherished regional breakfast treat; Center: Doda Barfi treacle tart with vanilla bean ice cream will delight pecan pie lovers; Lower left: The Copper Cup — don’t miss having April tell you all about it! Lower right: Familiar flavors come together in a nontraditional format: Crispy Seviyan with rice pudding and coconut jaggery ice cream

Indian Accent
A Selection of Vegetarian Options from the Menu

Indian Accent is at 123 West 56th Street in Manhattan, “twenty steps west of the Parker Meridien Hotel entrance” on that block, just as a bellman there directed us.

Indian Accent is at The Manor, 77 Friends Colony West, in New Delhi.