Healing Through Hospitality: Dining As A “Restorative” Experience 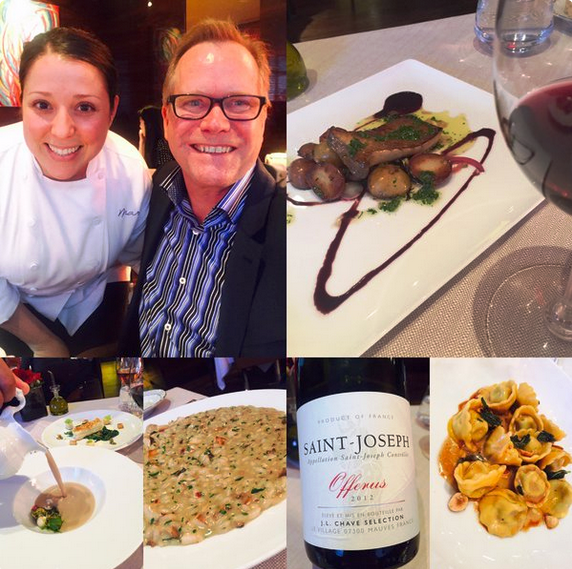 Restaurant:  (1821) from the French “restaurant,” originally “food that restores”; noun use of present participle of “restaurer” (“to restore or refresh”) is from Old French “restorer”

Last Monday after the morning Mass held in pastry chef Gina DePalma‘s memory at the Church of St. Joseph in Bronxville, NY, we sat in silence on the Metro-North train back into the city, feeling our sadness.

We live just a few blocks from Grand Central Terminal, but we didn’t feel like going home quite yet.

Instead, we pulled out our iPhone and searched OpenTable.com for lunch options.  Babbo wasn’t serving lunch, thankfully — that would have been too painful, having seen former colleagues of Gina’s at the church. 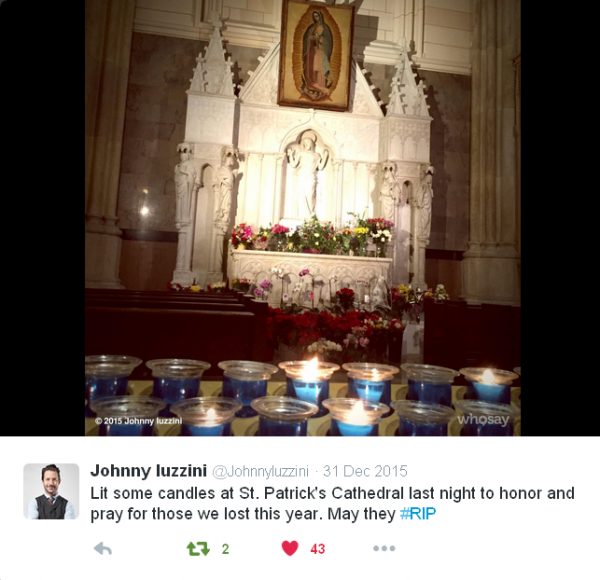 We scrolled and scrolled through the list of available reservations.  Nothing seemed right.  But then we spotted an open table at Marea, where we’d only previously eaten as guests of winemakers in the private dining room.  It had been on our short list of places we really wanted to check out ever since Karen had had the pleasure of working with Chef Lauren DeSteno at last September’s SHARE benefit, of which Gina had long been a part.  Going Italian in Gina’s honor seemed right — so we grabbed a 12:45 pm table. 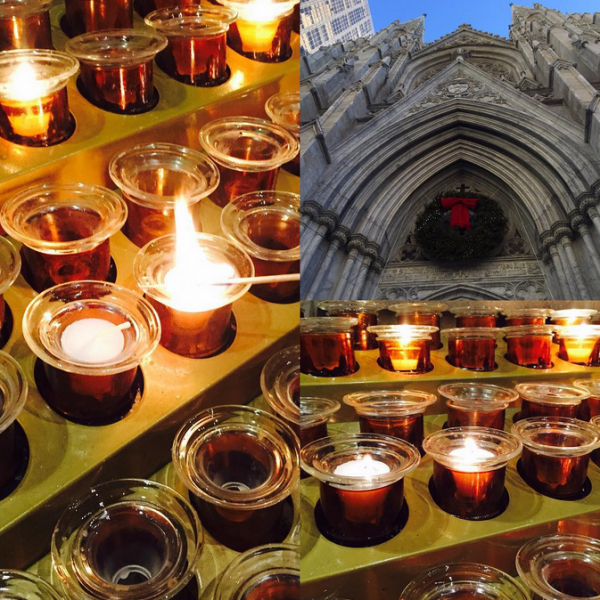 We stopped to light two candles for Gina at St. Patrick’s

On the walk from Grand Central to Marea, we stopped by St. Patrick’s Cathedral to light two candles for Gina — inspired by the example of Gina’s fellow pastry chef and friend Johnny Iuzzini, whom we’d spoken with at the church service and who had mentioned this on his Twitter feed. 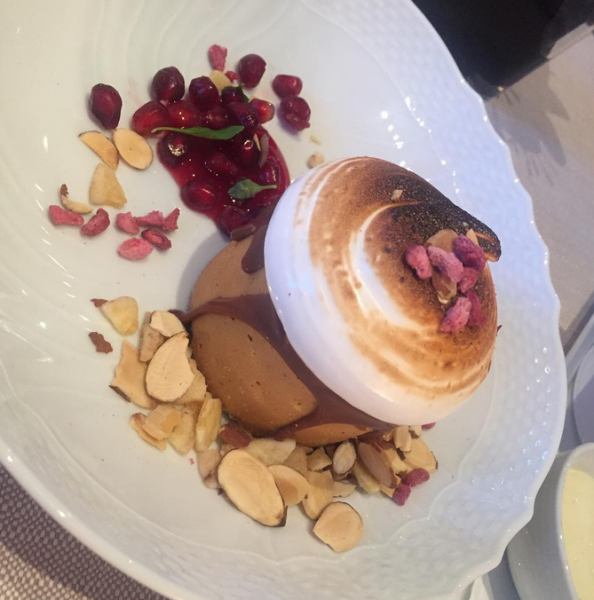 Blessedly, our lunch at Marea achieved the miraculous:  Our sadness was lifted by the warmth of the hospitality we received from our lovely server Darnelle, who told us she’d been given a copy of our book THE FLAVOR BIBLE by a former colleague of hers now cooking at San Francisco’s The Progress.  We felt nourished by Lauren’s wonderful cooking — including chestnut soup with chiodini mushrooms; pansotti with taleggio, red kuri squash, swiss chard, and hazelnuts; and acquerello risotto with wild mushrooms and parmigiano — and comforted by the St. Joseph’s wine that had jumped out to us from the wine list.  By the time we tasted two of pastry chef Francis Joven‘s creations — including bomboloni doughnuts served with lemon ricotta, dark chocolate, and bay leaf, and a salted caramel semifreddo with chocolate, banana, pomegranate, and almonds (pictured at right) — our sadness had lightened into actual hopefulness.

Gina’s funeral was the second we’d attended in less than a month, so we’d found our spirits more challenged than they’d been in a while, and ourselves out of sorts.  On Tuesday, we worked so hard to catch up on lost time that we’d forgotten to eat lunch, which had us craving an early dinner.  Skimming the list on OpenTable.com, we were shocked to see that Blue Hill had a table open at 6 pm, so we jumped on it.  We’d loved the extraordinary vegetarian dinners we’ve enjoyed there in the past, but couldn’t recall how much advance notice they required, so we called to find out.  Turns out they require no advance notice at all — but the call turned up the fact that we’d been so out of sorts that we’d actually booked for the wrong night.  We apologized, but they very graciously offered to squeeze us in anyway.  We can’t tell you how glad we were that they did. 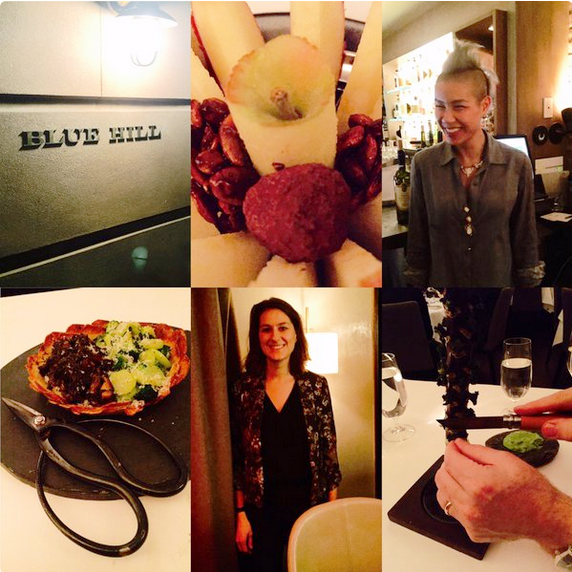 Dinner at Blue Hill took us completely outside of ourselves and our blue mood.  We were lucky enough to find Executive Chef Dan Barber in the house, with his kitchen team ably led by Chef de Cuisine Meytal Kotik, clearly another female rising star in the New York City firmament, and dining room attended by one of the most gracious and “present” front-of-the-house teams in the city, including Assistant General Manager Nicholas Larsen.

Memorably, we were presented with our first stalk of “kalette” — a brand-new vegetable (the first since broccolini) that is a cross between kale and Brussels sprouts — impaled on a bed of spikes along with a knife and a smear of a green herb sauce.  We were instructed to cut the sprouts off the stalk, and to dip them in the sauce.  It was a consuming blast — and quite delicious.  (We were so curious that we even whittled off a slice or two of the stalk to taste it — the moist but very fibrous flesh had notes of horseradish.)

Our progression of dishes also included an especially lovely salad of Winter Fruits and Vegetables, featuring celery root, lady apples, pickled potato and mushroom, and a perfectly-sliced Black Dirt Carrot Steak served with squash rings, smoked apple, and bordelaise.  The flavors throughout our meal were intense and clean, unmarred by the overuse of butter or cream. 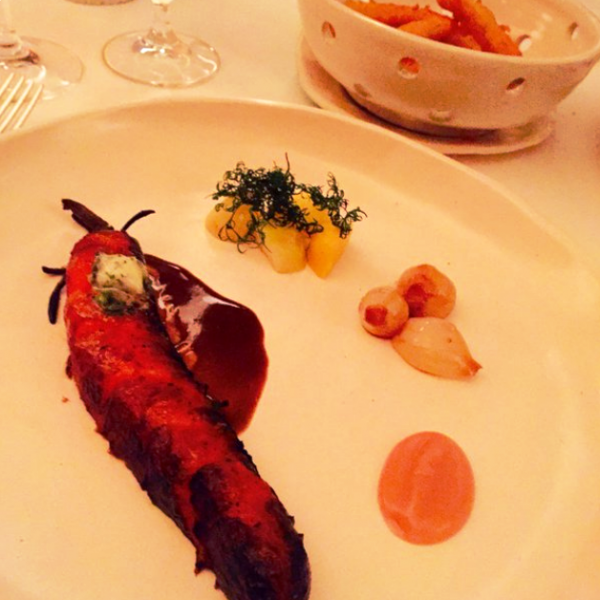 One of the highlights of the dinner was being presented with two farm-fresh eggs, and told that the chicken who’d produced one of the eggs had been fed exclusively on red peppers.  Indeed, both the eggshell and — as we saw when presented with the finished dishes — especially the egg yolk were darker in color, with the yolk a bright crimson.

We took flashless photos on our iPhone, looking forward to sharing them here.  However, this week when we tried to upload the latest version of Apple’s iOS 9 onto our iPhone, it caused our iPhone to crash.  We lost many priceless photos and other files — including all of the precious photos of our lunch at Marea and dinner at Blue Hill.  These few that appear in this blog post were rescued from our Twitter and Instagram posts.

But even without all the photos, we’ll never forget these extraordinary experiences of hospitality as healing — and we’ll be forever grateful to the kitchen and dining room teams at Marea and Blue Hill for doing what they do so well, and being a source of comfort and inspiration during a time of sadness for us.

And even with Gina DePalma no longer on this planet, she lives on, too.  We tasted it during our first visit last Friday to Sadelle’s for bagels and pastries (including a not-to-be-missed chocolate babka) that are the creation of gifted baker and co-owner Melissa Weller, an alumna of Gina’s kitchen.  We felt it in the messages we’ve received from industry colleagues and friends who read our tributes to Gina.  And we see it places like Facebook, where there’s a group called the Cookbook Junkies who are hosting an online event “Baking In Memory of Gina DePalma,” and posting photos of the dishes they’re making from Gina’s cookbook Dolce Italiano and/or in Gina’s memory.

As reflected in the roots of the word “restaurant,” good food created and served with good intentions truly restores.  And we are both so grateful for that.