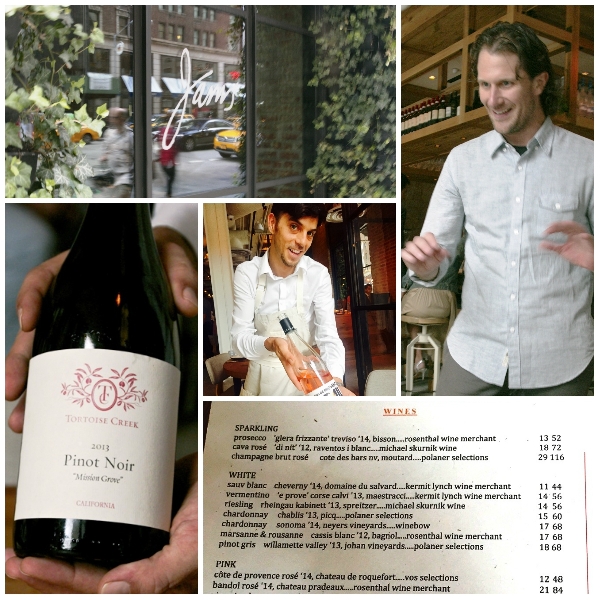 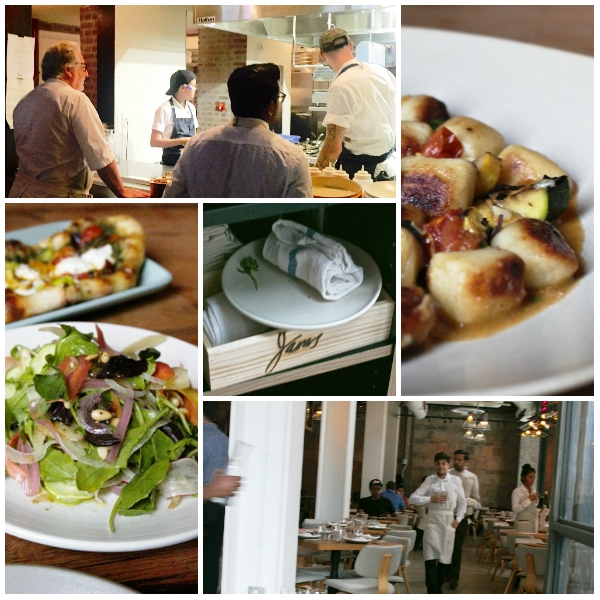 After Karen first moved to New York City in 1983, she discovered Jonathan Waxman and Mel Master‘s hot spot JAMS (Jonathan’s And Melvyn’S), and was an instant fan.  Her good fortune of working on Wall Street in the go-go era of the 1980s turned out to be able to accompany clients on expense accounts to some of the city’s hottest restaurants, so she’d know which places were worth returning to for drinks and bites at the bar on her own nickel.

JAMS brought her back time and time again — as much for the vibe as for the food, and certainly for the pleasure of talking at the bar with bartender Lucky, who turned out to be a neighbor in the same up-and-coming Brooklyn neighborhood.

So it was with excitement that Karen “returned” to the newly-opened JAMS at The 1 Hotel Central Park last night, reinvented a mile south and a few avenues west of its former location (now occupied by the first veg restaurant to earn a two-star review from The New York Times: Candle 79).  Andrew was an enthusiastic “first-timer” and witness to a dining room full of guests whose median age suggested that many might also have been at JAMS’ original incarnation.

We both left with reasons to want to return.

As we combed the wine list, we immediately noticed a very useful feature we don’t believe we’ve seen before on any other list:  the names of the wines’ importers/distributors.  It was so striking that we asked our waiter Fabrizio (he of the one of the most charming Italian accents we’ve ever heard) about it, and who was professional enough to send over passionate wine director Michael Kelly, who told us he’d collaborated with Jonathan on both JAMS’ and Barbuto‘s wine lists.  Michael also believed the feature to be a wine-list first, and both a nice shortcut for wine-knowledgeable diners when ordering and guide for newbies to discover new wines they might be likely to enjoy in the future.  We wholeheartedly agree.

The menu itself was filled with more dishes we hoped to try than appetite to get to them all, so we settled on a lovely shaved vegetable plate with pine nuts and apple cider vinegar and a charred-edged pizzette with pesto, goat cheese, mozzarella, squash blossoms, and cherry tomatoes to start, followed by risotto with wild mushrooms, burrata, and argula pesto (a dish far more delicious than it photographs) and sauteed gnocchi with summer vegetables.  The latter two left our plates covered with so much delicious sauce that we sulked aloud that JAMS didn’t offer bread service, which would have helped to ensure that they didn’t go to waste.  Minutes later, Fabrizio returned from the kitchen with two beautiful warm rolls that did the trick, and as Jonathan passed our table, he seemed pleased with our unmistakable demonstration of culinary admiration.

Like the original JAMS (which was said to be Andy Warhol‘s favorite New York restaurant), JAMS 2.0 is already pulling in its share of star power.  We’d had the pleasure of last seeing multitalented actor Peter Gallagher backstage with our mutual friends Rikki Klieman and Bill Bratton after we joined them for Peter’s show at The Regency in mid-November 2012.  While we’d loved him on Broadway (having first met him backstage following “The Country Girl”) and on film (“sex, lies and videotape,” “While You Were Sleeping,” et al), we were surprised to really love his performance as a crooner in the intimate venue of Feinstein’s.  But then his daughter Kathryn Gallagher took the stage during his show, and wowed us.  So when Peter was seated two tables away last night at JAMS, Karen got up to say hello and Peter introduced her to his wife Paula Harwood, and the couple proudly mentioned that talented Kathryn would be making her Broadway debut next month in “Spring Awakening.”

But that didn’t turn out to be the only familiar face in the dining room.  Michael Kelly mentioned that JAMS cofounder-turned-winemaker Mel Master himself (whom we’d met a decade or two ago at a dinner party at the home of mutual friends Loren and James) happened to be in, so we were able to reconnect to compliment him on his sustainable Tortoise Creek wines that we’ve enjoyed frequently in the years since, most recently as our go-to wine whenever we visit Candle 79 or one of the Candle Cafes.

Because that’s the JAMS Karen remembers from the 1980s:  a place you could walk into without knowing a soul other than the person you came with, and could leave with a happy palate and a pocket full of business cards of new acquaintances.  The restaurant’s friendly vibes continue.

And as for those dishes we wanted to taste but didn’t get to order last night at JAMS….Well, we’re glad to have yet another reason to return.