Randall Grahm Envisions The Future of Wine (Including 10,000 New Grape Varieties) — And Launches An Indiegogo Crowd-Funding Campaign to Create It 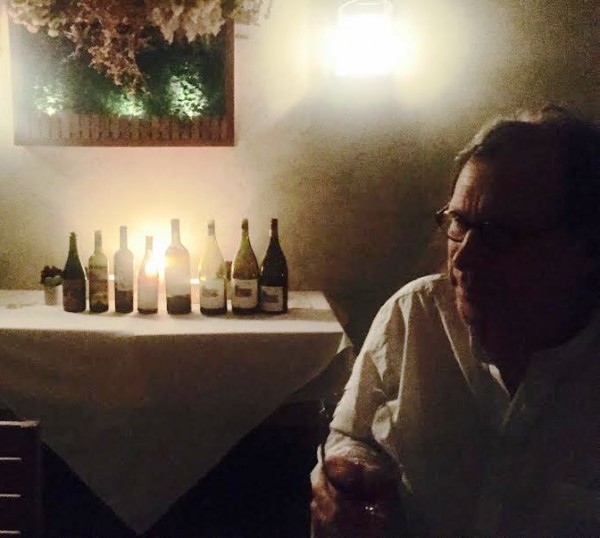 Winemaker Randall Grahm, with some of his wines poured during last night’s  dinner

“Bonny Doon’s Randall Grahm says a biodynamic approach to winemaking affects not only the wine, but also winemakers themselves, giving them ‘the ability to see the natural world with more sensitive eyes and the gradual cultivation of powerful intuition.'”
–Karen Page and Andrew Dornenburg, The Washington Post (July 18, 2007)

We love wine, which won’t come as a surprise to readers of our books WHAT TO DRINK WITH WHAT YOU EAT (who made it one of the top 10 bestselling wine books on Amazon.com) or THE FOOD LOVER’S GUIDE TO WINE.

We also love San Juan Bautista, which was long one of Andrew’s parents’ favorite places on earth — and where we co-hosted a surprise 50th wedding anniversary party for them in 1999, just a year before losing Andrew’s mother (and, a few years later, his father). 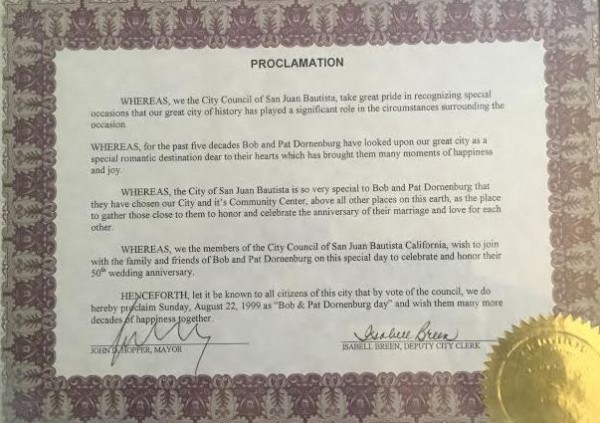 “…Henceforth, let it be known to all citizens of [San Juan Bautista] that by vote of the council, we do hereby proclaim Sunday, August 22, 1999, as ‘Bob and Pat Dornenburg Day’ and wish them many more decades of happiness together.”  Signed by the Mayor and Deputy City Clerk of San Juan Bautista

And we’ve long loved the “soulful, distinctive, and original” spirit behind Bonny Doon Vineyard and its wines — from its Vin Gris de Cigare rosé to its Le Cigare Volant Reserve, a Rhone red blend crafted in California that in the winemaker’s own words “suggests a Burgundian take on Châteauneuf.” 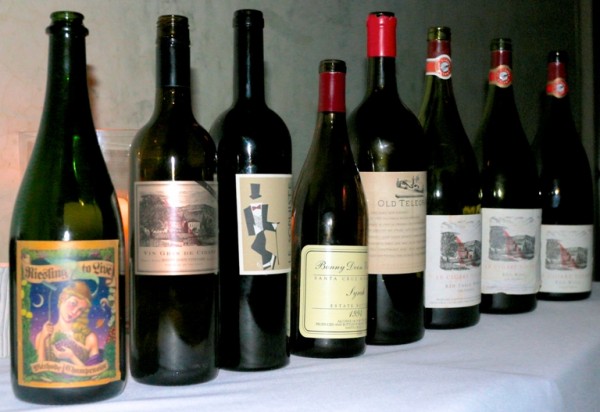 So when we learned that celebrated winemaker Randall Grahm, who founded Bonny Doon more than three decades ago in 1983, had announced an ambitious crowd-funding campaign last week for The Popelouchum Project — which translates as “village” or “paradise,” fittingly, as it seeks to create the first-ever New World Grand Cru wine —  and saw on its Indiegogo page that it combined all three of these loves, we were in.

Last night, we had the opportunity to join a private dining roomful of fellow wine lovers (who included filmmaker Amy Atkins — who made the video on The Popelouchum Project that appears below — and her husband journalist Forrest Sawyer, City Winery founder Michael Dorf, author Adam Gopnik and his wife Martha Parker, Tasting Table‘s Kat Kinsman, NYU’s Marion Nestle, and wine importer / distributor Michael Skurnik) to learn even more from Grahm himself over dinner at Blue Hill in Manhattan, before thanking Chef Dan Barber personally for our wonderful feast. 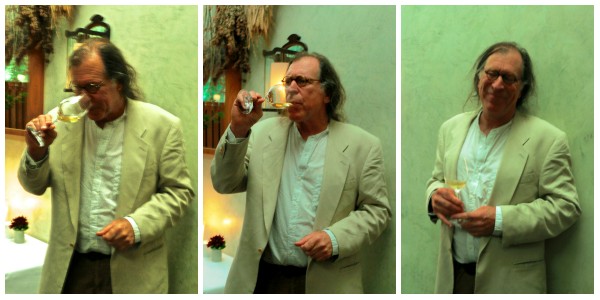 “Music is the space between the notes.”
–Claude Debussy

“‘Rossese is a wine made by empty spaces,’ says the thoughtful Filippo Rondelli of Terre Bianche.”
–Andrew Jefford, in Decanter (April 27, 2015)

Grahm is most excited about wine grapes’ potential to serve as conduits for terroir, which he suggests — like music — can “fill the space” between the notes of the grapes themselves.  He’s long fantasized about making a Burgundian-style wine right in California, and automatically assumed at first that he’d have to fashion it from Pinot Noir.  But he’s also fascinated with underappreciated grapes like Italy’s Rossese and France’s Tiburon (which he was tickled to learn are genetically the same grape), both of which produce intensely aromatic light-bodied wines with pronounced notes of herbs (or garrigue, as it is known in Provence) and minerality.

Such grapes — and/or 10,000 others — could allow the terroir of the land he prizes in “cool” (it was the site of Hitchcock’s “Vertigo,” after all) San Juan Bautista to shine through.  And he wants to dedicate the rest of his life (which, with his mother Ruthie Grahm still very active in her 90s, could well be decades) to creating those grapes, and identifying ones perfectly suited for this place, in order to create a new American “Grahm Cru” wine.

Hundreds of wine lovers (including us) have already chipped in to help make Grahm’s audacious vision for the future of wine a reality.  You can be an important part of creating it, too — and have one of those 10,000 new grape varieties named after you, or receive another of several fun rewards in store for donors.  Check out Amy Atkins’ video (featuring lovely music courtesy of Will Ackerman‘s Windham Hill) below, then head to Indiegogo to “join the party”!

“Join me on a journey of discovery to change the way we grow grapes, to change the way we think about vineyards, to perhaps discover an entirely new vinous expression, and to maybe even get a unique grape variety named after yourself! … I’m looking to change the wine industry in a big way. It is part of my life’s work to continue to push the boundaries of this very conservative business. I want to create 10,000 new grape varieties over the next 10 years, and to plant a uniquely heterodox vineyard – each vine genetically distinctive from the other — in the hopes of revealing a new Grand Cru in the New World. I am seeking funds to help start breeding these new grapes at ‘Popelouchum,’ and to potentially leave a rich legacy for the next generation of grape growers and wine drinkers.”
—Winemaker Randall Grahm

“Check out what @RandallGrahm is planning on doing. A visionary!! And, you can get involved….”
–Sommelier Rajat Parr, via Twitter (July 25, 2015)

Randall Grahm‘s website for his book Been Doon So Long is at beendoonsolong.com.

Bonny Doon Vineyard is at bonnydoonvineyard.com.

The Popelouchum Vineyard Project‘s crowdfunding page is at indiegogo.com.