Are You Cooking with Authentic French Shallots? How You Can Tell 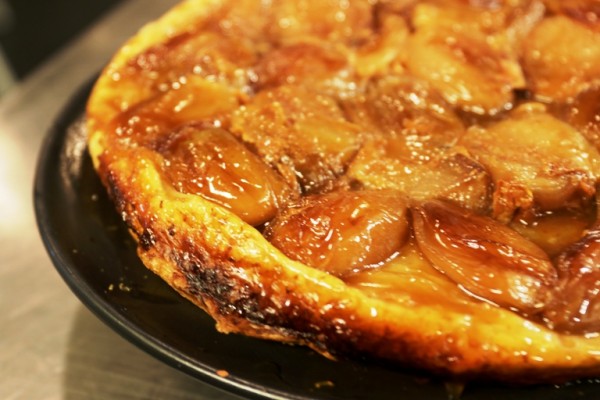 One of the most memorable Tarte Tatins we’ve ever tasted, this Shallot Tarte Tatin was made by Chef David Mawhinney of Haven’s Kitchen from real French shallots — and underscored their tender sweetness

Are you cooking with authentic French shallots?

We didn’t know the answer to that question until we attended a June 30th cooking demonstration and three-course lunch at Haven’s Kitchen in New York City hosted by Pierre Gelebart of  France’s Echalotes Traditionnelles.

Turns out that “shallots” can be grown in the traditional way — from a multiplied shallot bulb, on a single bulbous plant — or from seed, the way onions are grown.  The former results in a hard end on the shallot you hold in your hand, which is where it was separated from the bulbous plant, while the end of the latter has soft “whiskers” like a scallion (note the scallion on the left in the photo below). 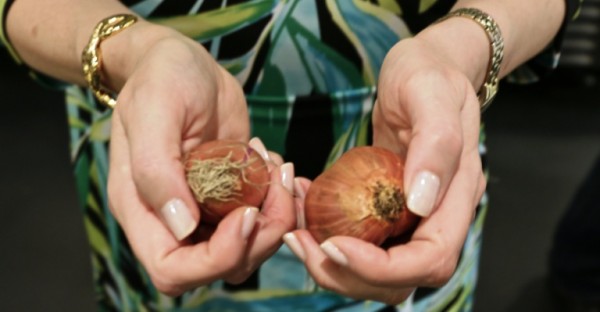 The shallot on the left? Grown from seed, it’s not a genuine French shallot, which you can tell by the soft “whiskers” on its end.   The authentic one on the right has a hard bump (or “scar”) on its end, and was grown on a bulbous plant.

Because France produces 80 percent of all the traditional shallots in Europe, it’s obviously interested in getting the word out to consumers who might not be aware of the differences.  Indeed, over the past five years, less expensive, industrially-produced, seed-grown shallots have captured 10-15 percent of the market in France, the Netherlands, the United Kingdom, and the United States.

“Traditional shallots are firm, with a uniform color;
they appear both shiny and dry.”

Chef David Mawhinney of Haven’s Kitchen in New York City prepared a three-course lunch for our table of journalists, with each course showcasing authentic shallots — raw (in a salad), sauteed (in the entree), and caramelized (in dessert).  It was so impressive that we had to look up his culinary pedigree, which we were not surprised to learn included stints in the kitchens of Per Se and Lincoln.

In the middle photo above, you can see a cross-section of a sliced authentic shallot, which will have two or three inner sections.  (Seed-grown shallots will have more concentric circles, like an onion.)

– Cut shallots, then rinse, and dry before cooking for a milder flavor.

– Avoid browning shallots, which can make them taste bitter.

– Cook shallots in their skins by brushing unpeeled shallots with olive oil before wrapping in aluminum foil and cooking for an hour at 350 degrees. 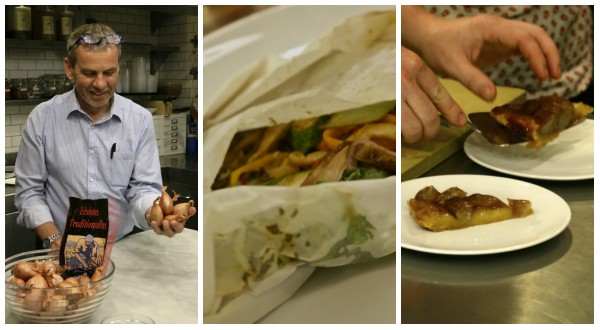 Why should you care?  Echalotes Traditionnelles reports, “Great chefs, when asked to compare the two, came back with a final judgment: the traditional shallot is finer, more subtle, and holds up better.”  While this event did not include a comparative tasting of the two, we found ourselves with renewed enthusiasm for real French shallots’ delicate flavor — whether raw, sauteed or caramelized, with the latter two also evoking extraordinary richness.

And now that we know the difference, we’re planning to look for “Traditional Shallots” on the label when shopping for shallots, which are available at better food stores, including Whole Foods. 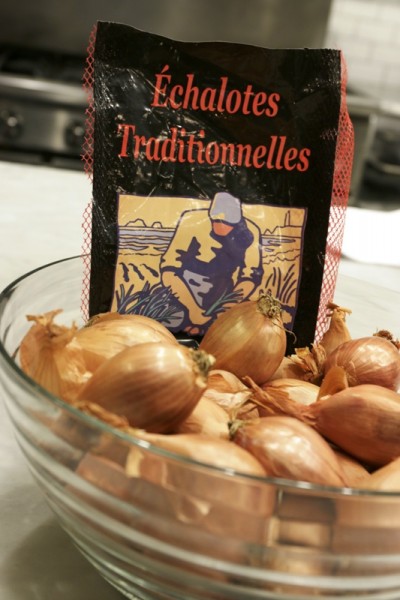 Haven’s Kitchen is a recreational cooking school, café and event space located in a carriage house at 109 West 17th Street (bet. Sixth and Seventh Avenues) in New York City, and at havenskitchen.com.