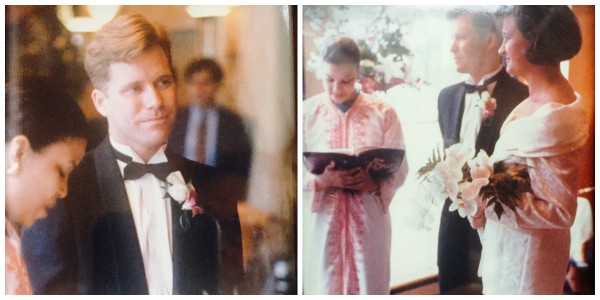 “To say that our thoughts and prayers are with them and their families and their community doesn’t say enough to convey the heartache and the sadness and the anger that we feel.”
—President Barack Obama

When we were planning our wedding in 1990, Karen harbored hopes of finding a female officiant.  After she read an inspiring Harvard alumni magazine profile of the Harvard Divinity School’s  valedictorian Dr. Judi Bowman, we knew we’d found our woman.  Twenty-five years ago this August 25th, we were married by this African Methodist Episcopal (A.M.E.) minister — which is how we first came to learn a little something about the A.M.E. church.

We’d learned that this was the first major religious denomination in the West that had been founded in response to sociological and theological beliefs and differences, and in protest against slavery.  The A.M.E. declared that “God is God all the time and for every body,” which reflected our own beliefs.

Seeing the news this morning that a white man had shot and killed nine black people during a prayer meeting at their historic A.M.E. church in Charleston, South Carolina, sickened us.

We managed to feel even worse after our Charleston-based food world colleagues Matt Lee and Ted Lee‘s posting of a Tweet: “You should know just how central this church is to Charleston’s identity & history,” providing this link to the history page of the Emanuel A.M.E. Church‘s website.

But something beautiful happened this afternoon.  Our Facebook friend Andrea Strong had shared a Facebook post from Colorado-based Mike Johnston, about a letter he had written to his local A.M.E. Church, which we found incredibly moving and wanted to share more widely than Facebook and Twitter, so we are also sharing it here: 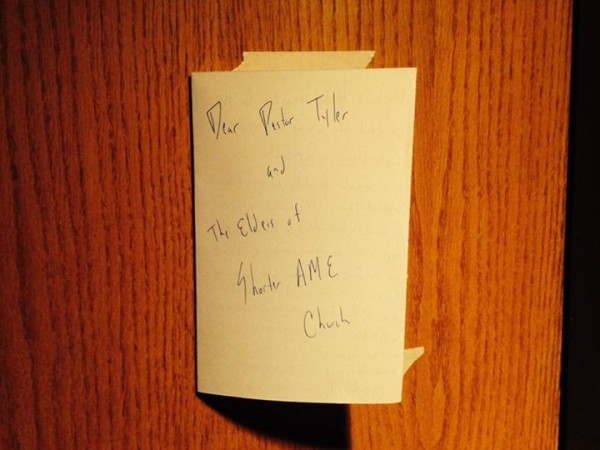 The letter Colorado’s Mike Johnston taped to the door of his local Shorter A.M.E. Church after driving there in the middle of the night last night. 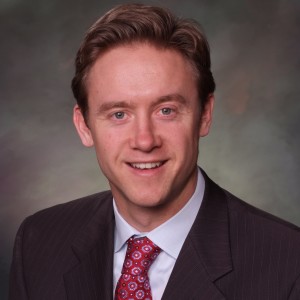 Dear Pastor Tyler and the Elders of Shorter A.M.E. Church,

My heart breaks for those children of God that we lost in your sister church in South Carolina tonight. On a night when old, devastating patterns of racial injustice return like childhood nightmares, it seemed the best thing to do was to get out of my bed and drive over here to make sure this note was the first thing you saw when you walked in the church tomorrow. This white man is driving over to this AME church to tell you how deeply grateful I am that the leaders of your church have helped build this city, and how honored I am that the ancestors of this church have helped build this great country.

For centuries your church has stood for the unconditional love, unfettered hope, and relentless forgiveness that define the American spirit. I want you to know I stand arm in arm with you today in your grief. I refuse to let one deranged man speak for me, and I also refuse to stay silent after his abomination.

I drove over just to remind you and remind myself of the words from one of America’s greatest preachers and one of the Lord’s greatest prophets who said that “Hate can not drive out hate, only love can do that.” With that truth in mind, in the wake of tonight’s heartless stabs of hatred, I drove here to reaffirm the overwhelming supremacy of love. And to stand with millions of other white men who are proud to call you brothers and sisters, and who feel compelled now to right the wrongs of generations past by ensuring that these lost loved ones you will not grieve alone, this hollow hatred you will not face alone, and this righteous justice you will not seek alone.

Mike Johnston added to his Facebook post, “As a white American I think we should make a point today to make a small but powerful statement that today we all stand together: and do it by stopping by any A.M.E. church in your community and perform a quiet act of service and leave a humble note of thanks. Whether you can sweep a walkway or pull some weeds or collate a bulletin, or ask if you can help and offer a hug and before you go, leave a note on the front door letting them know that you care. By Sunday morning America could blanket these churches with such overwhelming expressions of love that no one could walk through the doors of an AME church without feeling a flood of love and support from white men whose names they don’t know, whose faces they cant place, but whose love they cant ignore. Then share your small acts of love with the hashtag #Onlylovecandothat.”

We, too, stand arm in arm with the Emanuel A.M.E. Church community today in its grief — and we, too, refuse to let one deranged man speak for us, or to stay silent after his abomination.

The official website of the African Methodist Episcopal Church can be found here.

The website of the Emanuel African Methodist Episcopal Church in Charleston, South Carolina, can be found here.