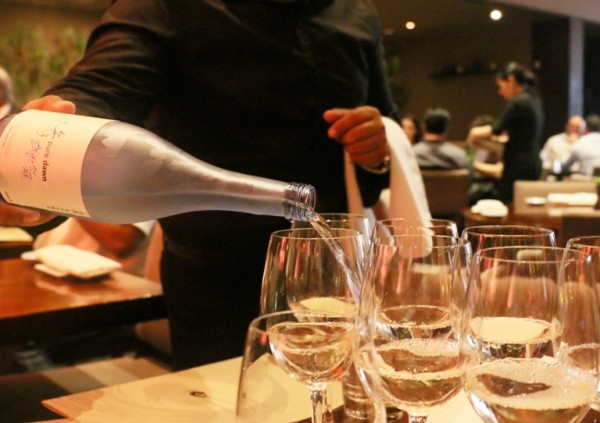 Our waiter at KOI pours glasses of sake for our tasting.

After Karen first moved to New York City in 1983, she frequented a sushi restaurant that was as well known for its loud music and party ambiance as for its sushi, and where the waiters were better known for their New Wave haircuts than for their service.  That’s where she tried sake for the first time, which was served hot in traditional pine boxes.  It was exotic, and fun, and as a young 20-something, she loved it.

Fast forward to the turn of the Millennium, when we’d finally discovered sake served chilled, in fine glassware.  It was exotic, and delicious, and as 30-somethings-plus, we loved it. 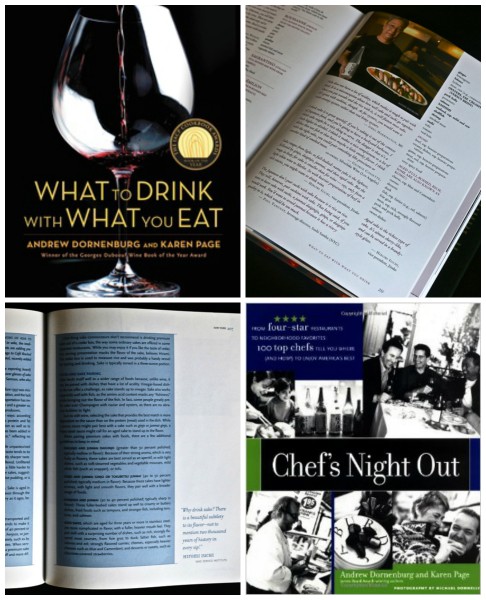 So when Marja Samson of Kitchen Club and Chibi’s Sake Bar offered to introduce us to Hiromi Iuchi of the Sake Service Institute, who was making inroads into teaching New York restaurants — and, in turn, New Yorkers — about sake, of course we jumped at the chance to learn more.  We joined her for a sake tasting at Chibi’s, and another over a meal at Sakagura (211 East 43rd Street, near Second Ave.), which turned into a two-page feature in our 2001 book CHEF’S NIGHT OUT.

Our love of sake continued, with our knowledge and enjoyment enhanced by subsequent tastings and discussions with experts ranging from sake expert Paul Tanguay (then of Sushi Samba) to master sommelier Roger Dagorn, as chronicled in our multi-award-winning book WHAT TO DRINK WITH WHAT YOU EAT.

Even today, we’re loathe to pass up an opportunity to enjoy and learn more about sake.

So yesterday, we didn’t. 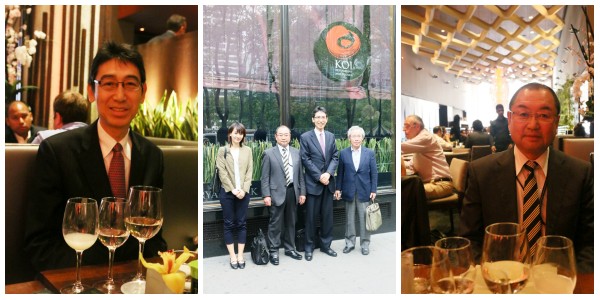 We had the great pleasure of joining the President of Shimizu-No-Mai (which translates as something like “Dancing Pure Water”) Junichi Hirakawa and his company’s Executive Master Brewer (Toji) Hitoshi Kato for a brief lunch on their first-ever visit to New York City (and just before they had to fly to Chicago), in the good company of Miho Suzuki of its Sales Department, translator Yukimichi Tamura, and Terlato Wines’ Kanchan Kinkade.

Mr. Kato, it was explained to us, is one of the top three tojis (master brewers) out of more than 1000 tojis in Japan, and has been with the company for more than three decades.  Mr. Hirakawa has served for the past four years as the company’s president.  The company itself was formed 71 years ago upon the merger of a dozen smaller family breweries (some of which were then as old as 450 years) to create one medium-sized sake brewery, based in Akita, in northern Japan.

Sake is made only of rice, water, koji (defining it as “a type of mold” doesn’t begin to do justice to its revered status in sake-making), and yeast.  (Oh, in addition to know-how, Toji Kato might argue — although he is perhaps too humble to do so himself.)  The advantages of locating the company in the north were twofold, we learned:  1) access to very good rice for the production of sake (which was referenced for the “soft quality” of its starch, which could be easily diluted in water), and 2) access to very good water from the mountains, which provided the sake itself with this prized “soft quality.” Only three sake breweries had won a gold medal for 11 consecutive years in a certain national competition of sake quality, and Shimizu-No-Mai is apparently one of them.

While many if not most manufacturers of sake in Japan are said to be rather conservative (with respect for traditions first and foremost — see the company’s sake-making video in the green box below), Shimizu-No-Mai also takes pride in its innovative spirit, which is spurring its new product development effort.  A case in point:  a dessert junmai sake, introduced and well received locally in Akita and anticipating global roll-out, whose sweetness comes from using koji to convert the starch in the rice to glucose. 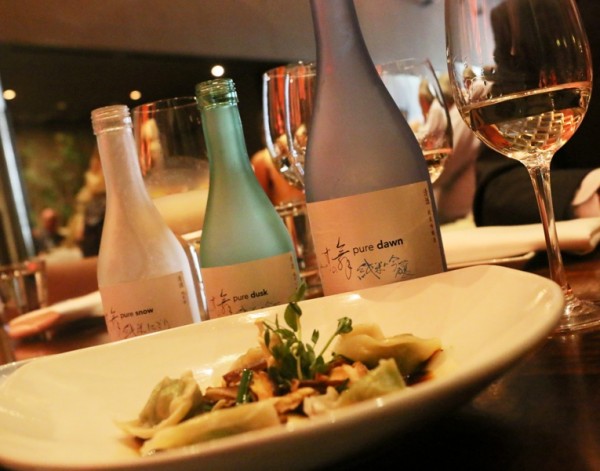 From its line of five types of sake, we tasted through three yesterday.  While all three had the same percentage of alcohol (15.5%), each was very different in weight, texture, and other attributes:

2) Pure Dusk:  a medium-bodied, fruitier Junmai Daiginjo style sake, with the mouthfeel of 2% milk, and

3) Pure Snow:  a rich, unfiltered Junmai Nigori style sake, with the mouthfeel of whole milk perhaps enriched with additional powdered milk that hadn’t been fully incorporated (and of course tasting much better than this sounds). 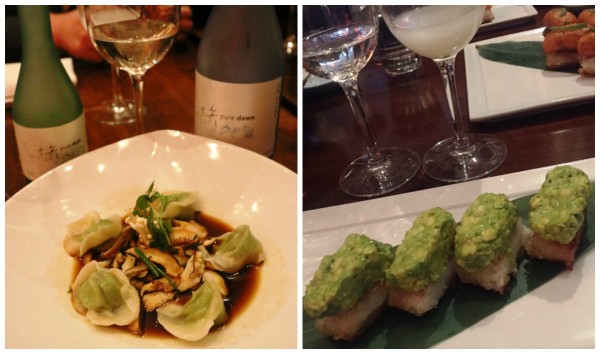 Our starters of edamame dumplings with mushrooms in a mirin broth and Koi crispy rice topped with avocado gave us our first opportunities to play with food pairings.  The sweetness of the mirin-flavored mushrooms were a slam dunk with Pure Dusk, which offered its own hints of soft sweetness.  The richness of the avocado cozied up decadently to the richness of Pure Dawn. 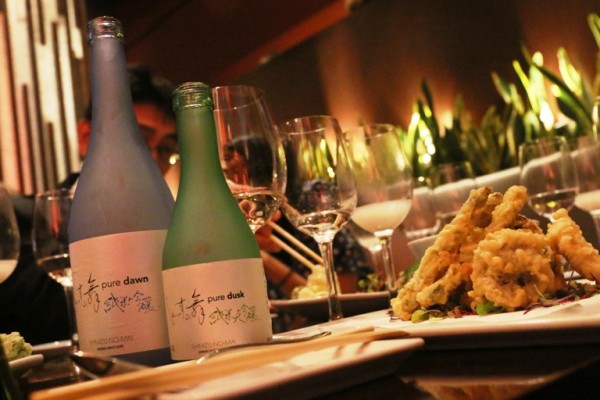 Different sakes brought out different aspects of our entree of tofu and vegetables with a sweet and spicy ginger sauce.  Pure Snow was a rich-on-rich complementary pairing with the tofu, while Pure Dusk offered palate-cleansing contrast.  The best pairing for our vegetable tempura varied by vegetable:  sweet yams were embraced by Pure Dawn, while asparagus was high-fived by the Pure Dusk. 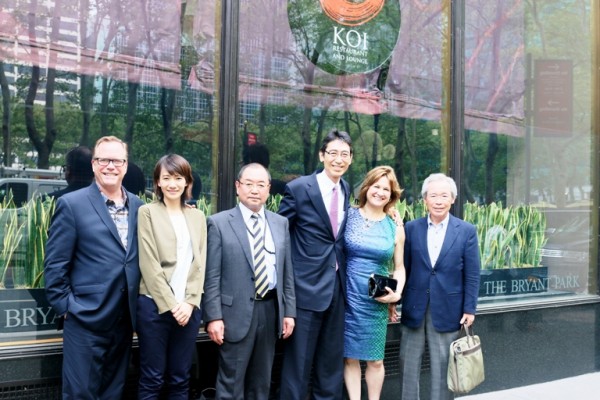 Karen’s hot sake-sipping days of the 1980s led to unforgettable times connecting with friends, including signing a sake-fueled pact with one that if the two of them weren’t married to others by a certain age, they’d get hitched.  (Thankfully, Andrew notes, they both were.)  Our chilled sake-sipping lunch yesterday led to no pacts, but was nonetheless a memorable bonding experience with these delightful first-time Japanese visitors in New York City. 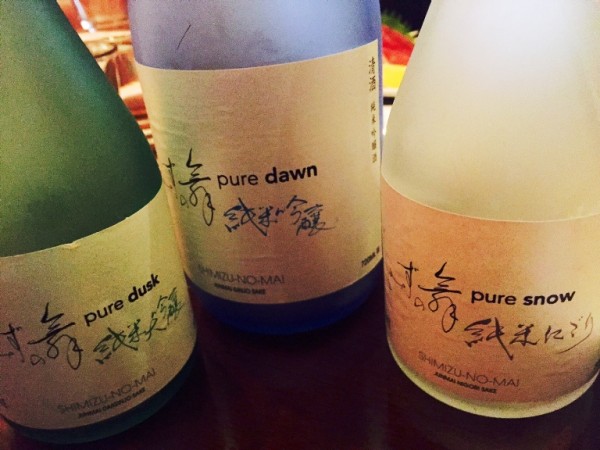 Shimizu-No-Mai is a distinguished sake brewery located in Akita, Japan, and at takashimizu.co.jp and puresake.com.