The Beauty of Produce Is In the Eye of The Beholder: Don’t Overlook Buying Fruits and Veggies That Were “Born This Way” 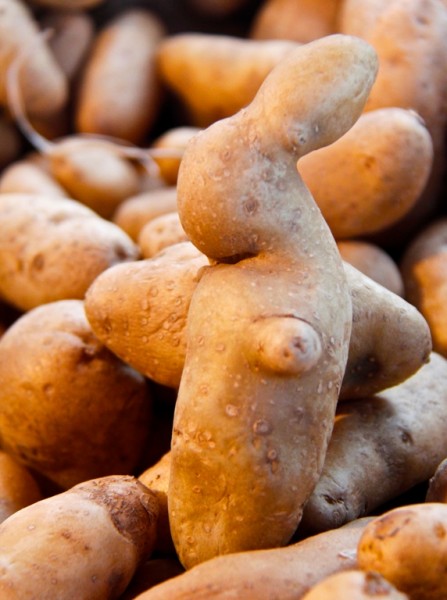 Above: Andrew shot — and bought! — this lovable bunny-shaped potato at the Union Square Greenmarket

“AWESOME!”
—Jordan Figueiredo @UglyFruitAndVeg, a food waste activist based in northern California, commenting via Twitter on Andrew’s potato photo above

We love that others (including Jordan Figueiredo @UglyFruitAndVeg) shared our enthusiasm yesterday (via Facebook and Twitter) for the shot Andrew took (above) at the Union Square Greenmarket of a “perfectly-shaped potato” for an Easter celebration.

While we reveled in this potato’s uniqueness — especially given the Easter holiday — we’re aware that we’ve long been too conditioned to prize uniformity in our produce.

This has led to a sad waste of more than 20 percent of produce based simply on its size, shape, color, or appearance — produce that is at least as delicious and nutritious as its more conventional-looking cousins.

This, in turn, has led to EndFoodWaste.org‘s creation of the “Ugly Fruit & Veg” campaign to encourage major retailers to sell unusual-looking produce, and to encourage consumers to buy it — so that 20 percent can be significantly reduced.

The next time you’re at the Union Square Greenmarket or your own local farmers market, be sure to include some so-called “ugly” fruits and vegetables in your purchase to do your part to help shrink the pressing problem of food waste.  We bet you’ll find a lot to love about them.

Jordan Figueiredo‘s EndFoodWaste.org, an organization that’s striving “to end food waste, hunger, and climate change – all at the same time.”

In March 2015, Food & Wine editor-in-chief Dana Cowin launched the hashtag campaign #LoveUglyFood and delivered a TEDx talk in Manhattan titled “How Ugly, Unloved Food Can Change the World,” which you can watch here: