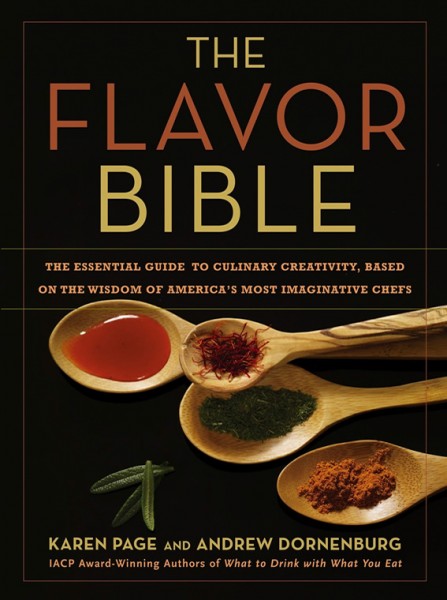 “[Brandi Henderson, an architect who became a pastry chef and blogger and teaches at the Pantry in Seattle] recommends THE FLAVOR BIBLE, a book by Karen Page and Andrew Dornenburg that features no recipes but encourages intuitive cooking using lists of ingredients and complementary flavors and techniques. ‘If we leave the recipe behind and get back to technique cooking,’ she said, ‘kitchen waste will go away.’”
—Kim Severson, The New York Times (March 4, 2015)

It was already turning out to be a red-letter morning.

While out to pick up a bagel and The New York Times today, Andrew ran into NYPD Police Commissioner Bill Bratton.  Andrew stopped to say hello and to let him know he was heading home to watch the Commissioner’s wife Rikki Klieman on “CBS This Morning,” as we knew she was appearing at 8:20 am to provide her always-insightful legal commentary, today on the Maryland “free-range parenting” case.

Then, while waiting for Rikki’s segment to take place, we caught the CBS promos for another segment featuring uber-restaurateur Danny Meyer (of USHG, Shake Shack, et al) and his pizza emporium-to-be Marta (which we featured on our blog during its opening week).

By the time we’d finished Tweeting the Commissioner and his wife and Meyer, we finally got around to perusing The New York Times — where we discovered that THE FLAVOR BIBLE had received its first-ever mention in the paper!

The two of us are even more thrilled that it’s part of Kim Severson‘s excellent Food section cover story on how to salvage more of the 31% of food currently wasted in the U.S., which addresses how out-of-fashion it is for chefs to waste food.

We love that THE FLAVOR BIBLE is able to help readers address this pressing problem by providing tips on using everything one finds in one’s refrigerator or cupboards and making them all taste even more delicious.

Our heartfelt thanks to Seattle cooking instructor Brandi Henderson of The Pantry for recommending THE FLAVOR BIBLE, and to Kim for including Brandi’s quote.

Hope you’ll read through to the article’s very last paragraphs:

Efficiency in the Kitchen to Reduce Food Waste