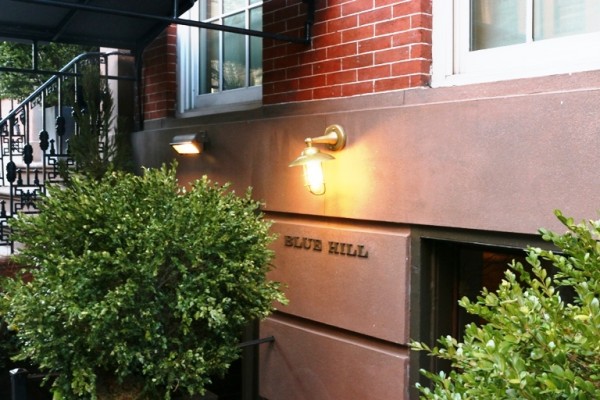 “Blue Hill at Stone Barns in Pocantico Hills, New York, is arguably the single most important restaurant in America at the moment, for modeling the power of the farm-to-table dynamic.”
—Karen Page and Andrew Dornenburg‘s eNewsletter (Summer 2005)

“This March, Blue Hill restaurant in Greenwich Village is temporarily reinventing itself as wastED, a pop-up devoted to the theme of food waste and re-use.  wastED will collaborate with local farmers, fishermen, distributors, processors, plant breeders, producers, restaurants and retailers, reconceiving “waste” that occurs at every link in the food chain. We are also partnering with more than 20 guest chefs to curate daily specials and help celebrate what chefs do every day on their menus (and peasant cooking has done for thousands of years): creating something delicious out of the ignored or un-coveted.”
–from wastED‘s website (March 2015)

A decade ago, we paid our first-ever visit to Blue Hill at Stone Barns and were blown away by the dinner then co-executive chefs Dan Barber and Mike Anthony prepared, characterizing it in our Summer 2005 eNewsletter as “one of the most extraordinary dinners of our lives.”  Not only was it thrilling from a gastronomic perspective, but it was thrilling to foresee through this vision-in-action the potential for the farm-to-table movement, one that has since influenced countless chefs and restaurants across the country. 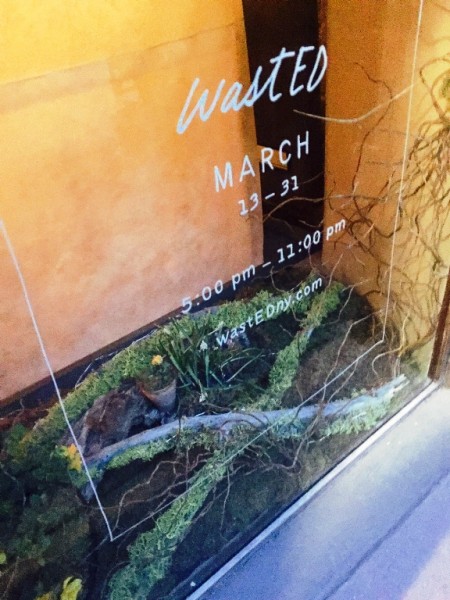 Fast-forward to last night:  Dan Barber has a new vision — one of reducing the United States’ appalling rate of food waste (currently 31%, as reported in our March 4th and March 6th blog posts) by re-purposing food that had been formerly discarded into a source of gastronomic pleasure.   He and his team have transformed the original New York Times three-star restaurant Blue Hill near Washington Square in Manhattan into wastED for the period of March 13-31, 2015. 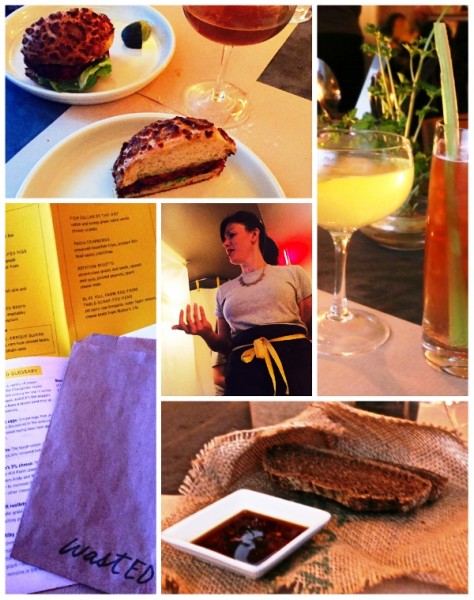 Top left:  As part of our extensive research for THE VEGETARIAN FLAVOR BIBLE, we have eaten a lot of veggie burgers over the past few years all across the United States, and wastED’s was one of the very best we’ve ever tasted, despite being made from leftover juice pulp, ReConsider cheese, and ketchup made from bruised beets, and served on re-purposed bread buns with pickled cucumber butts (ends).  (In fact, Karen dreamed last night that Danny Meyer‘s Shake Shack was serving veggie burgers made from juice pulp, and now she can’t stop hoping it will become a reality!)

Top right:  Other than a glass of 2014 Matthiasson Rose (poured from a large-format bottle from this waste-conscious Napa Valley winery), over the course of the evening we stuck with cocktails which included guest mixologist Audrey Saunders’ Evil Little Misfit (bitter lemon vodka infusion Lillet Blanc, left) and Blue Hill’s own Immunity Booster (Melvin’s juice pulp gin and last night’s champagne, right).  Leave it to Audrey Saunders to find a way to use the only part of a lemon that is not used in cocktails:  the pith, whose chemical composition apparently isn’t even suitable for composting.  We also tasted and especially enjoyed the flavors of The Boiler Maker (McKenzie Bourbon infused with walnut press cake, flat beer syrup, spent coffee grounds bitter).   Kudos to Blue Hill’s beverage team for these perfectly crafted cocktails.

Center:  Alexandra served our section with the kind of grace, good humor, poise, professionalism, and deep knowledge that comes from being a farmer with a master’s degree.

Bottom right:  Deeply flavored stick-to-your-ribs bread made from spent grains (that had been previously used to brew beer) was unwrapped of its burlap cloak and accompanied by squash oil the color and texture of maple syrup. 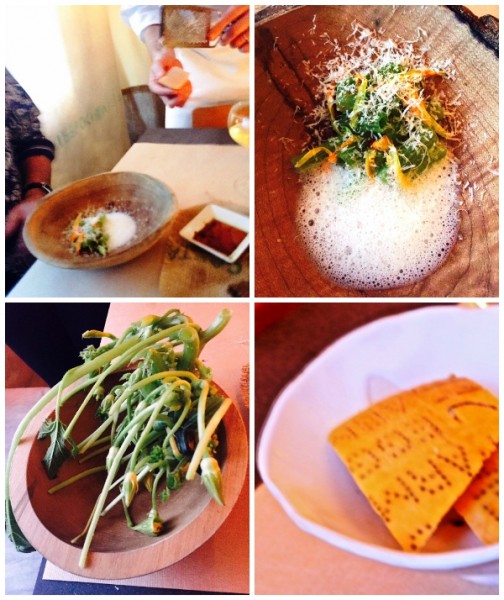 Not yet an official part of the wastED menu, we were able to taste a delicious dish made from squash vines that had been developed in conjunction with Cornell University’s Department of Plant Breeding to make them more palatable.  Dan Barber finished the dish off with a grating of Parmesan cheese from leftover rinds acquired from Whole Foods Market. 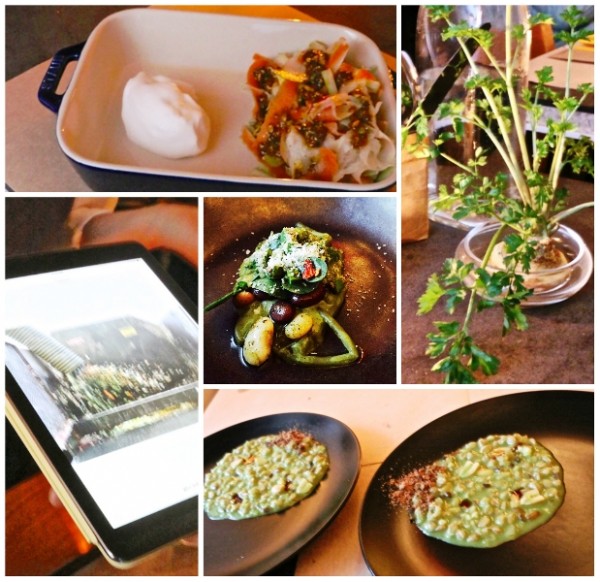 Top left: Dumpster Dive Vegetable Salad was made with pistachios blended with damaged storage apples and pears; chickpea water was whipped in a stand mixer into the dollop you see to the left of the salad, which provided a fun textural contrast in addition to creamy richness.

Top right:  Green centerpieces were beautiful as well as edible.

Bottom left:  Servers and cooks made excellent educational use of iPads to show images such as this one of vegetable waste being blown into large dumpsters — the very same kind of waste that had been washed and trimmed for use in our salads.

Bottom right:  Rotation Risotto was made with “second class” grains and seeds, squash seed pulp, pickled peanuts, and spent cheese rinds.  To say one dish stood out over the others would not be true – our running joke all night was, “My favorite dish? The next one!” (reflecting our rising crescendo of delight).  But this dish was a standout, due to the differing textures of the grains changing each bite – we also loved the chewiness versus the usual crunchiness of the peanuts. 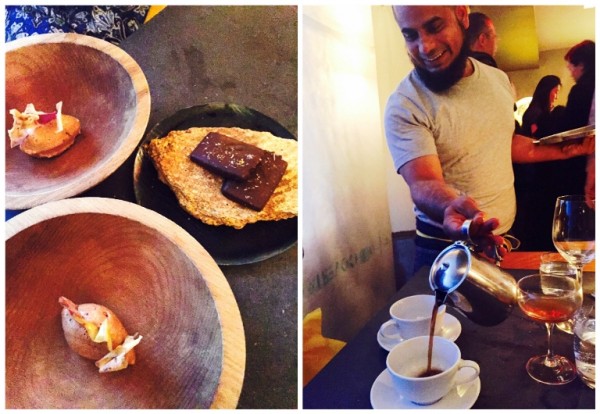 Left:  The desserts above were all made with nut dust, a block of which the chocolate-covered nut dust cookies are sitting upon at the right of this photo.

Right:  We finished our meal with cups of cascara, a light-bodied, fruity-flavored, coffee-like beverage made from an infusion of the husks of coffee cherries from Talnamica Farm in El Salvador. 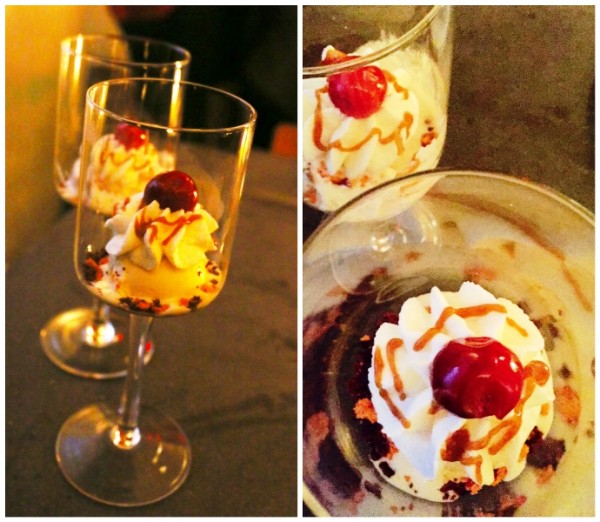 What could be more fun than finishing off such an unforgettable experience with a cherry on top?  We did indeed, with the Milky Oat Ice Cream Sundae made with almond press cake biscuit, fermented cherries (from Stone Barns, we were told), and walnut press candied vegetable pulp.

We loved the wastED experience so much we’re tempted to jump online to make another reservation to experience it again before it ends a week from tomorrow — but we’re just as tempted to keep our two seats open so two other people can have the joy of experiencing it themselves.  The jolt of electricity in the air at wastED generated by the passion that this talented restaurant staff and enthusiastic patrons alike are both bringing to this “happening” is something we wish everyone could tap into.