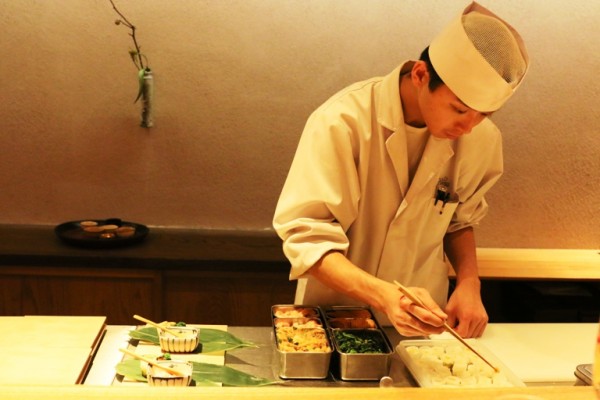 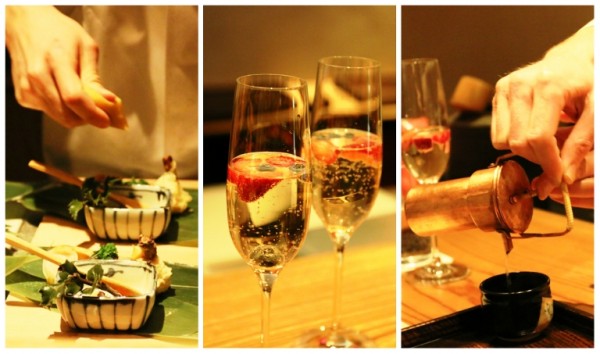 “Setsubun:  A day before the beginning of Spring in Japan.  ‘Setsubun’ literally means ‘seasonal division,’ and it is celebrated yearly on Feb. 3 as part of the Spring Festival.  In its association with the Lunar New Year, Spring Setsubun can be and was previously thought of as a sort of New Year’s Eve.  That’s why it was accompanied by a special ritual to cleanse all the evil of the former year, and drive away disease-bringing evil spirits for the year to come.  This special ritual is called mamemaki (literally ‘bean throwing’).”
–From the menu at Kajitsu (February 14, 2015)

One of the reasons Kajitsu is among the restaurants we love visiting most often — aside from the talent and charm of its entire staff (including Chef Atsushi Nakahigashi, whom we will miss upon his departure at the end of this month — although we’ll hope to follow him wherever he ends up), and the excellence of its cuisine — is because it is a different restaurant every time we visit.

With its passionate commitment to celebrating the seasons, you’ll find different ingredients and dishes on offer every month.  Last night’s mid-February visit was a celebration of winter. 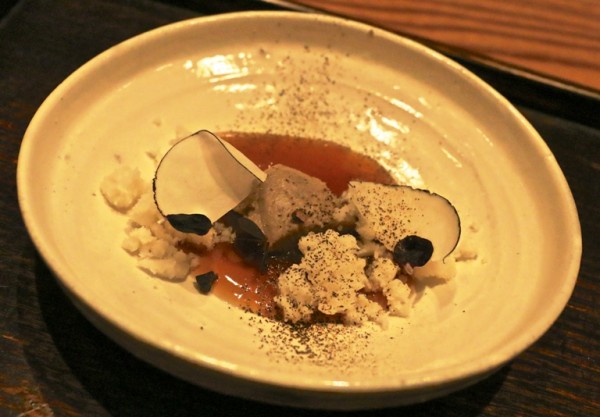 Our texturally rich first dish “Oni: Celebrating the Beginning of Spring” was made from black bean tofu, lily bulb, black daikon, crunchy cacao nibs, and leek powder — with the white tofu reminiscent of piles of snow. 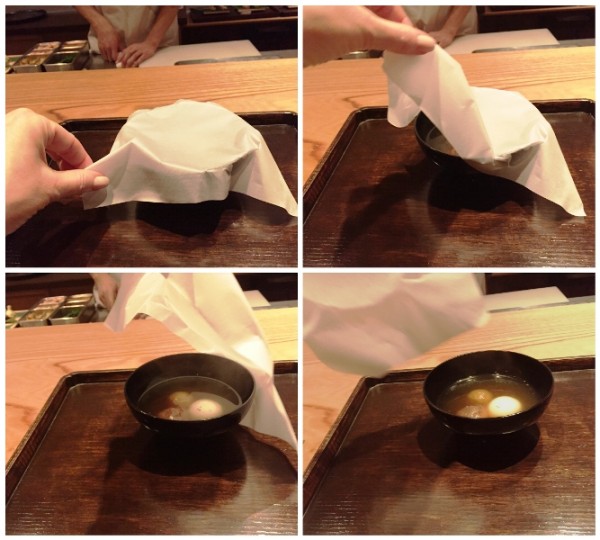 The “Plum Blossom Soup” — a broth holding a whole umeboshi plum (which came with an accompanying warning about its pit), a golden beet, and a soft, chewy rice cake — came covered, with instructions to unwrap, unveiling its aroma. 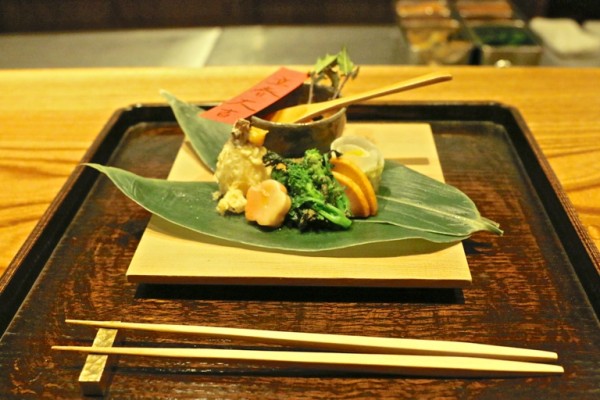 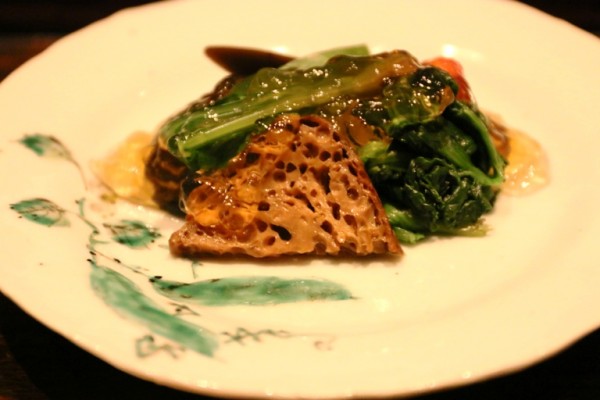 When Kajitsu describes a dish as “White Miso Hot Pot,” it means HOT pot (as you’ll see in our 15-second video above)!  This one was served with lotus root, Japanese taro potato, konnyaku, mizuna greens, Brussels sprouts, scallions, and yuzu. 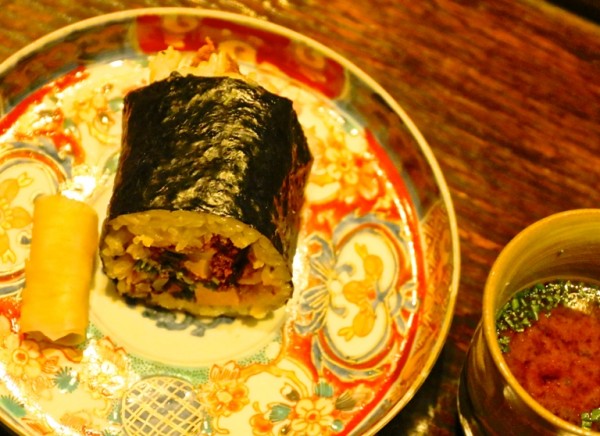 “Eho-Maki:  It is customary in the Kansai area to eat uncut sushi rolls called eho-maki, a good fortune roll, in silence on Setsubun while facing the year’s lucky compass direction, determined by the zodiac symbol of that year.  This custom started in Osaka, but in recent years eho-maki can be purchased at stores in the Kanto area and it is getting more recognized as a part of the Setsuban tradition.  For this year, Eho (good fortune dirction) is West South West.”
–From the menu at Kajitsu (February 14, 2015) 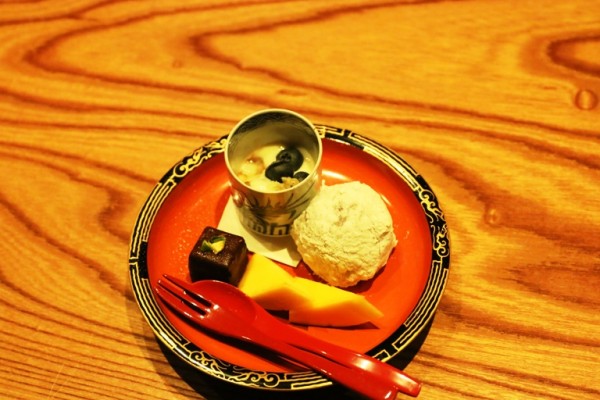 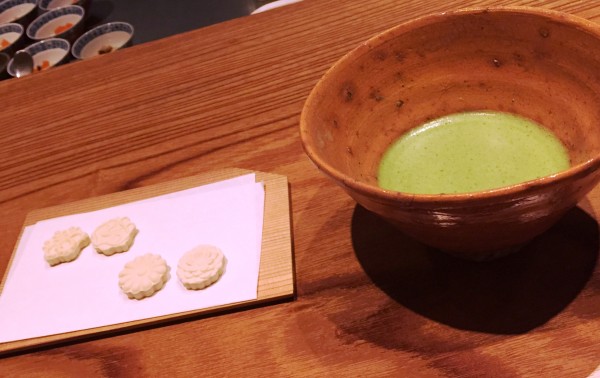 Candy from Kyoto Kagizen-Yoshifusa (left) accompanied whisked-to-order matcha (right, from Kajitsu’s renowned downstairs neighbor Ippodo Tea Co.), prepared and served by Chef Atsushi Nakahigashi with a reverent bow to each guest — as profound a moment as we’ve ever experienced at a restaurant.

Matcha with Candy by Kyoto Kagizen-Yoshifusa