What White Castle’s Veggie Burger Taught Us About Flavor — And Can Kathy Freston Persuade McDonald’s to Offer One? 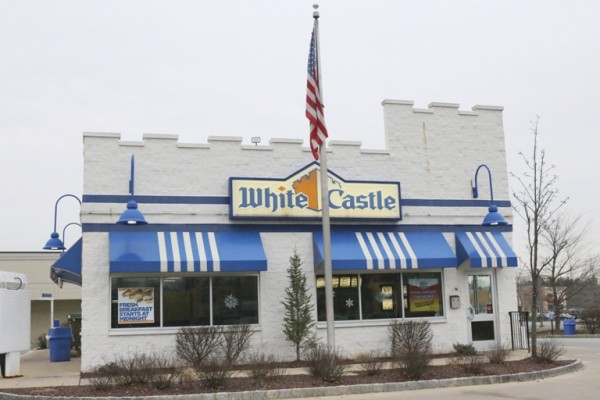 “Flavor profiles are really in the herbs or the vegetables, not the protein.  That is what determines the character of a dish.”
–Tom Colicchio, as quoted in THE VEGETARIAN FLAVOR BIBLE (p. 66)

Last weekend’s drive back to New York City from the Lodge at Woodloch in Pennsylvania meant only one thing to two “Veganuary”-celebrating vegetarians with a rental car and unlimited mileage:  Figuring out where we could find a White Castle so we could try its new 99-cent veggie slider, which debuted January 1st.

This was no health-motivated adventure.  What health nut goes out of their way to visit a fast-food restaurant?  Nor could we characterize this as a gastronomic adventure, as from that standpoint sliders are admittedly lacking.  But it IS about flavor — and this is one of those times we’re grateful to have already explained our view of flavor to the world, aka The Flavor Equation (see THE FLAVOR BIBLE, page 1):

Where TASTE = what is perceived via the tongue, e.g., the five basic tastes (e.g., sweet, sour, salty, bitter, umami)

MOUTHFEEL = what is perceived via the rest of the mouth, e.g., texture, temperature, etc.

AROMA = what is perceived via the nose

“THE X FACTOR” = what is perceived via the other senses, plus the heart, mind and spirit 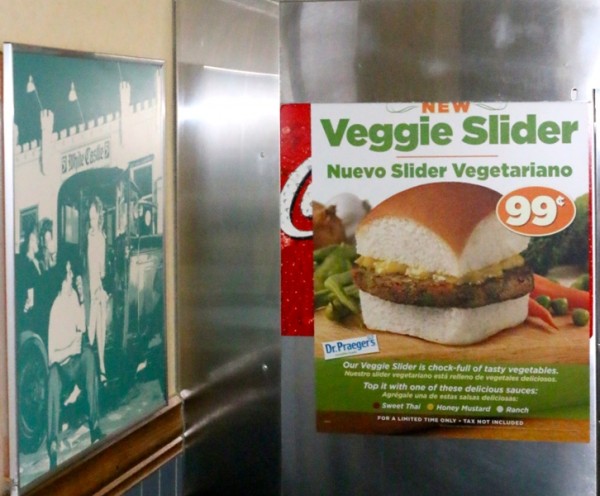 When it comes to White Castle, the flavor to Karen — having grown up in a household of Cravers — definitely has a lot of “X Factor” going on.  Her family ate White Castle when they visited Chicago, but settled for Top Hat clones in Detroit.  Andrew clearly didn‘t grow up with White Castle; on his first visit, he ordered ONE slider.  Sheesh….But even he acknowledges that for a lot of people, it’s a “thing.”  (Harold and Kumar included.)  Plus there’s a nostalgia factor simply given the fact that White Castle was the very first hamburger chain (founded in 1921 in Wichita; the first McDonald’s didn’t open until 1955 in Des Plaines, IL). 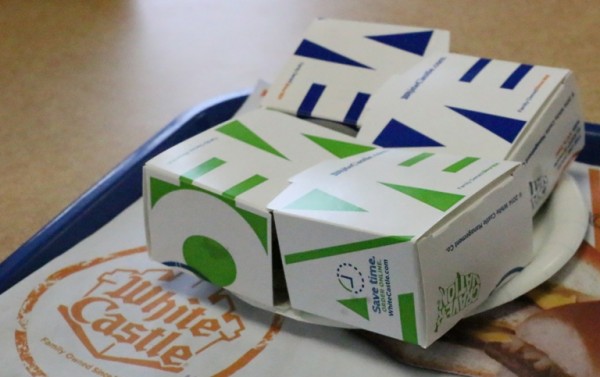 We were happy to Yelp our way to a White Castle not far off I-80 in New Jersey.  From a “gastronomic” point of view, the 99-cent veggie burger patty — which we learned is from New Jersey-based Dr. Praeger’s — was better than we’d ever imagined it would be:  We never expected to see actual, recognizable vegetables (e.g., corn kernels) in it.  The patty was cooked to order (which we were warned in advance would take seven minutes), so it had a rather nice crust on it, and we were also surprised to find the buns served lightly toasted.  There were three sauces on offer — Ranch (vegetarian), honey mustard (vegetarian), and Sweet Thai (vegan) — and since we’re eating vegan this month and since we don’t care for honey mustard, we each tried one burger with the Thai sauce, and asked for another with the standard toppings. 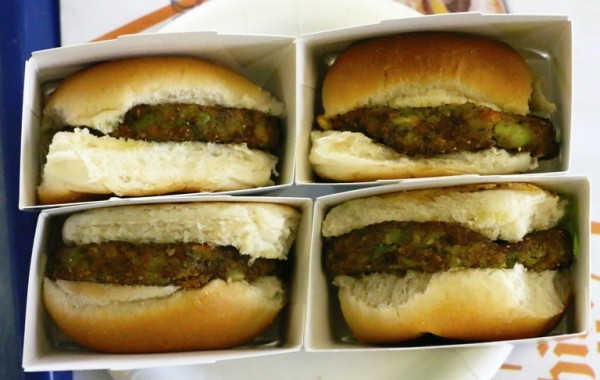 What we former carnivorous Cravers ended up missing in this entire White Castle experience was THE CRAVE.  Here’s why:  The flavor profile of a classic White Castle slider has little to do with the burger patty itself, which is a 1/8″ thin, three-inch square of ground beef that is steamed, then served on a steamed white airy bun.  Its flavor profile really has to do with the most flavorful elements of the experience, both of which happen to be naturally vegan: the  grilled onions and the pickle.

The grilled onions on our veggie burger?  Denied — as the grill was used for meat, and there was no dedicated area for grilling veg*n onions.  Sorry, White Castle, but this revelation was the moment we both knew:  “Game over!” 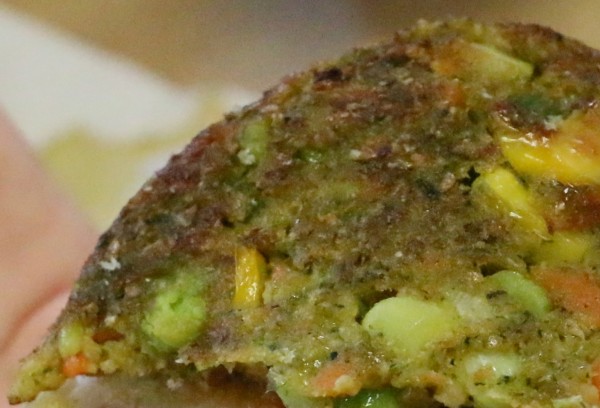 So, on the whole, how did the White Castle veggie slider stack up?

Minuses:  NO GRILLED ONIONS.  : (  And as for the sauces:  Who goes to White Castle for “Sweet Thai” anything?  Don’t they understand their brand?

We wish:  …that White Castle had catered their veggie burger to Cravers with a full-out vegan version that was a as close as possible to their classic slider — for example, a thin, three-inch square soy-based patty (e.g., made from frozen-then-thawed tofu, which can approximate the texture of ground beef), on a steamed bun, with grilled onions and pickles.  Now, we’re not fooling ourselves that it would be a healthful sandwich, nor even a gastronomically delicious sandwich — but it’s in fact one with a flavor profile that might lure us back again whenever we felt “The Crave.” 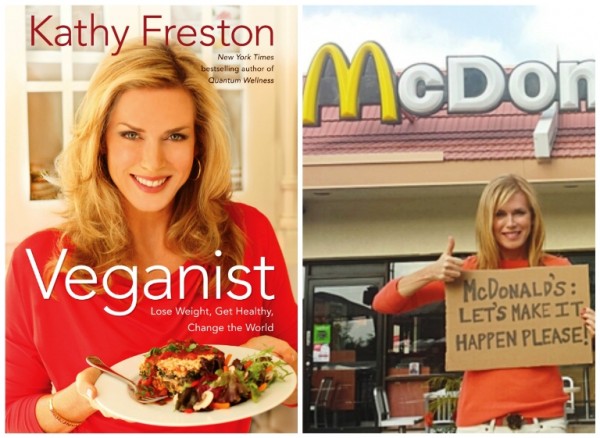 Anyway…perhaps McDonald’s can do better?  New York Times bestselling author and activist Kathy Freston (who is featured on page 40 of THE VEGETARIAN FLAVOR BIBLE for inspiring Oprah to undertake a three-week vegan cleanse) started a petition in January 2014 to get McDonald’s to add a veggie burger to its menu that’s already gathered 107, 611 signatures.  We’d be so curious to taste what McDonald’s would do with a veggie burger that she immediately got our signatures –– just click the Change.org link to add yours.

Kathy Freston can be found at kathyfreston.com.

Kathy Freston’s petition to get McDonald’s to offer a veggie burger (which as of this posting has 107,611  signatures and counting) can be found (and signed!) at Change.org.

Kathy Freston‘s book Veganist can be found at better bookstores everywhere plus at Amazon.com.

White Castle can be found at whitecastle.com.