“Why Not Try Going Vegan for the Month of January?” Ask the Organizers of Veganuary

“Why take part in Veganuary?  Well, why not?  There are so many reasons people decide to try vegan.  For most, a love of animals is the catalyst. Some people want to feel better about themselves and the impact they make on the world. Others would like to set themselves a challenge, and many combine Veganuary with their ‘New Year’s Resolutions’ and see trying vegan as the healthiest start to the year. Whatever your reason, we’re here to support you. So try vegan for a month and discover a whole new world of taste and flavour. We guarantee that, by the end of January, you’ll feel fantastic!”
–from the website Veganuary.com

When we transitioned to a plant-strong diet in May 2012, we were surprised to learn that eating meatless (i.e., no meat, no poultry, no seafood) was a lot easier than we ever thought it would be.  But while we’ve also significantly decreased the amount of dairy and eggs we consume, we’ve found it harder to eliminate them entirely from our diet.  It’s relatively easy at home — we simply don’t buy or cook with eggs or dairy products any longer, and have found ourselves more than content to substitute almond milk on top of our granola in the morning.

When we’ve traveled across the country, as we did on book tour this fall, we’ve learned that most areas are responding to the fact that Americans have been reducing their per-capita meat consumption for the past five years and that vegetarianism — representing vegans (2% of the population), vegetarians (5%), and semi-vegetarians (47%) — is now mainstream, as it’s already embraced by the 54% of the U.S. population that is looking to reduce or entirely eliminate meat from their diet.

So while we’ve found it pretty easy to eat a vegetarian diet, it’s still harder than we wish it were to eat a 100% vegan diet outside of major metropolitan areas.  We remember standing in line at the Seattle airport in November to order an Asian noodle dish offered with tofu and vegetables, just to discover as our order was finally taken that it was only served with a beef broth!  (Thankfully, it occurred to us to request no broth, and to ask for extra packets of soy sauce to moisten and season the noodles instead.)

For weeks, we’ve been hearing buzz — including this article by Victoria Taylor in the New York Daily News and this one by Mike Pomranz in Food & Wine — about the campaign co-founded by newlyweds-as-of-June-2014 Matthew Glover and Jane Land (above) called “Veganuary,” whose purpose is to encourage people to try eating vegan (i.e., no meat, no eggs, no dairy) for the month of January.

We’re going to consciously attempt to eat 100% vegan in January 2015, and to track what the experience is like during our out-of-town travels, as well as while we’re eating (out AND in) here at home in New York City.  Of course we’ll plan to keep you posted all along the way.

In the meantime, why don’t you plan to join us in giving eating vegan a shot next month, too?  Let us know what your experience is like, which we’d love to share here.  (And if you’re an omnivore who would only feel comfortable committing to “Vegetarianuary” or “Semi-Vegetarianuary” at this point…well, that’s a wonderful step in the right direction, too!)

Please feel free to email us (via our email address in the “Contact” section of the menu above) or post a comment below about your own experiences.  We look forward to hearing about them! 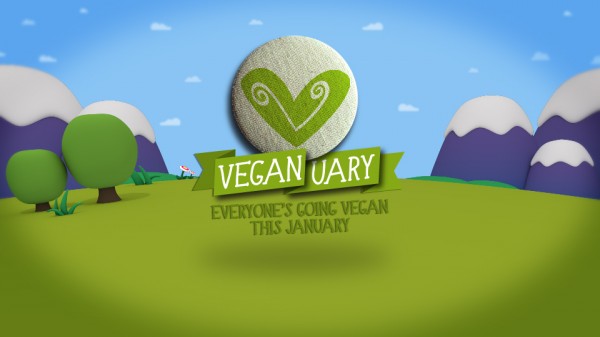 Veganuary is a UK-based effort whose website is veganuary.com — and you can reach the U.S. website at veganuary.com/usa/about.