THE VEGETARIAN FLAVOR BIBLE cited as a “New Landmark Cookbook” 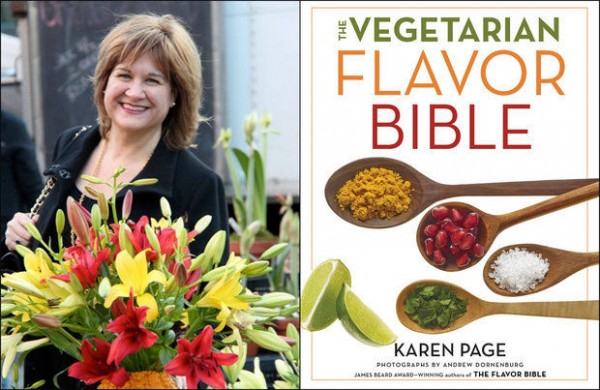 “I believe the future is vegetables and fruit.  They are so much sexier than a piece of chicken.”
—Jose Andres, on “60 Minutes,” as quoted in THE VEGETARIAN FLAVOR BIBLE

“Flavor profiles are really in the herbs or the vegetables, not the protein.  That is what determines the character of the dish.”
—Tom Colicchio, in Hamptons magazine, as quoted in THE VEGETARIAN FLAVOR BIBLE

“Probably 70 percent of our dishes are vegetarian.  We’re moving away from all the meat.”
—Daniel Humm, to GrubStreet.com, as quoted in THE VEGETARIAN FLAVOR BIBLE

Last week, registered dietitian Kristine Duncan, who’s been eating vegetarian since the 1990s, asked in her blog Veg Girl RD, “Is Vegetarianism Going Mainstream?” The first piece of evidence of this trend she cites is the publication of THE VEGETARIAN FLAVOR BIBLE, along with learning that the keynote speakers at September’s International Food Bloggers Conference in Seattle — authors of “the well-respected reference THE FLAVOR BIBLE” (i.e., us!) — have been eating vegetarian since May 2012.

Today, Karen’s interview with the food editor of The Oregonian about THE VEGETARIAN FLAVOR BIBLE appears, marking yet another important piece of evidence: Portland-based Grant Butler is the first vegan food editor of a major city newspaper, having announced his conversion on February 1, 2010.  And he’s not alone — The Washington Post‘s food editor Joe Yonan (who edited our wine column when we wrote for the Post in 2007-08) declared his vegetarianism on March 4, 2013.

In its historic (Chapter 1) and trend-based (Chapter 2) sections, THE VEGETARIAN FLAVOR BIBLE chronicles the intersection of vegetarian, gastronomic, global, health, and flavor trends that are intersecting in 2014, indeed leading us to this juncture of mainstream vegetarianism — with fully 54% of Americans now seeking to reduce (47%) or eliminate (7%) meat from their diets.

Today, most of the country’s very best restaurants — such as Alinea, DANIEL, Eleven Madison Park, The French Laundry, the Inn at Little Washington, and Per Se — offer vegetarian and even vegan tasting menus.  Jean-Georges Vongerichten announced his intention of opening a vegan restaurant in 2015.

Since THE VEGETARIAN FLAVOR BIBLE went to press, more evidence keeps mounting, including:

– Chef Amanda Cohen‘s uber-popular restaurant Dirt Candy — only the second vegetarian restaurant in history to have earned two stars from The New York Times — closed in order to focus on opening in a new, larger space more than double the size in early 2015

– Chef Joel Robuchon declared in an October 24, 2014, article on the rise of vegetarianism in France in The Telegraph, that “The cuisine of the next ten years will be vegetarian.”

In today’s column, The Oregonian refers to THE VEGETARIAN FLAVOR BIBLE as a “landmark cookbook.”  As vegetarianism has moved from the margins to the mainstream, we are seeing it being embraced by readers — restaurant and home cooks alike — who have been asking for more specific advice about cooking with a wider array of plant-based ingredients, including vegetables, fruits, whole grains, legumes, nuts, seeds, mushrooms, and more.  In its 576 pages (nearly 50% larger than the original), THE VEGETARIAN FLAVOR BIBLE delivers that advice in spades.

Duncan (of Veg Girl RD) quotes Ming Tsai on the subject of cooking vegetarian:  “You got to get over yourself, right?” Tsai says. “Thomas Keller, who’s probably the best chef in this country, if not the world, he accommodates. He has a vegetarian tasting menu. He can easily do 10 courses vegan if you want, right? He’s smart. I think if Thomas Keller can accommodate, every other cook in this world should do it, too.”

We’re proud to have created “a new landmark cookbook” that will help cooks everywhere tap their own creativity to make plant-based ingredients taste better than they ever dreamed possible.  Nothing but nothing is more exciting to creators of a years-long labor of love than seeing their creation being welcomed into people’s lives, knowing it has the potential to bring them both better health and greater pleasure for years to come.

Grant Butler writes about food and the arts for The Oregonian, and can be found online at oregonlive.com.

“It’s a kitchen must-have!”
–Book Larder in Seattle, on THE VEGETARIAN FLAVOR BIBLE

Seattle-based Book Larder is a community cookbook store owned by the lovely Lara Hamilton that features an extraordinary selection of cookbooks and cookbook events, where it was a pleasure to visit November 4th for an event around THE VEGETARIAN FLAVOR BIBLE.   We were delighted to learn today that the book hit #9 on the bookstore’s bestseller list for the month of November 2014!