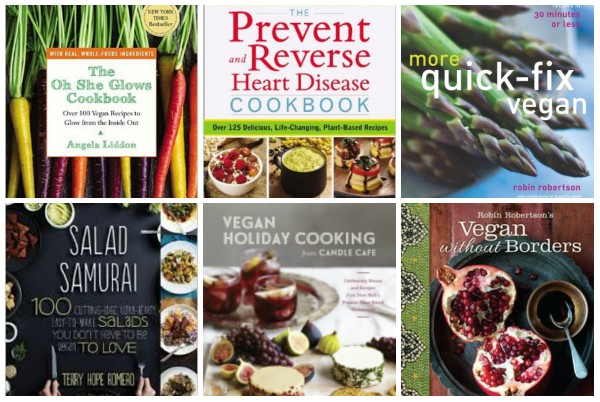 As newly committed participants in “Veganuary” (see our previous post, below), we’re especially happy that our bookshelves are groaning under the weight of some wonderful new vegan cookbooks that were released in 2014.  These are all wonderful plant-based books to keep in mind should you happen to have been the lucky recipient of a bookstore gift card this holiday season: 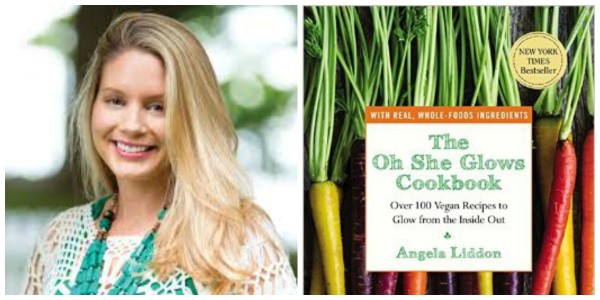 “[THE FLAVOR BIBLE] is a resource tool that I turn to time and time again.”
–Angela Liddon of OhSheGlows.com

The Oh She Glows Cookbook by Angela Liddon

We pay close attention to anyone who praises our books, including scores of chefs and food bloggers and others who have named one (or more!) of them among their very favorite cookbooks.  After all, anyone who has the good taste to single out our work publicly is obviously in possession of superior judgment — and (kidding aside) time has proven again and again that their restaurants and blogs are among the best we’ve ever visited.

When Canadian blogger Angela Liddon featured our book THE FLAVOR BIBLE on her healthy vegan website OhSheGlows.com on April 4, 2013, we couldn’t help but take notice:  Her following was so strong that it immediately spurred sales of the book into Amazon’s Top 25 cookbooks!

Angela has since released her first book The Oh She Glows Cookbook — and we were hardly surprised to see it, too, soar onto bestseller lists, including that of The New York Times.  It was also named the Toronto Vegetarian Festival’s “Best Cookbook of the Year” and Chapters/Indigo’s “Book of the Year.”

Angela is, in a word, irresistible.  She’s a lovely blonde with a girl-next-door smile, and a very relate-able story:  Like so many women of her generation, she fought an eating disorder and learned that the processed, low-calorie “diet” foods she’d previously turned to were part of the problem.  Her salvation proved to be a whole foods vegan diet, and she used her self-taught skills in the kitchen and behind the camera to tell her story through her blog, which she started in 2008, attracting legions of followers in the process.

We’re hardly surprised to see her new book — which is filled with easy-to-make recipes for, and lovely photographs of, breakfast dishes, appetizers, salads, soups, entrees, sides, power snacks, and desserts — earning her even more fans. 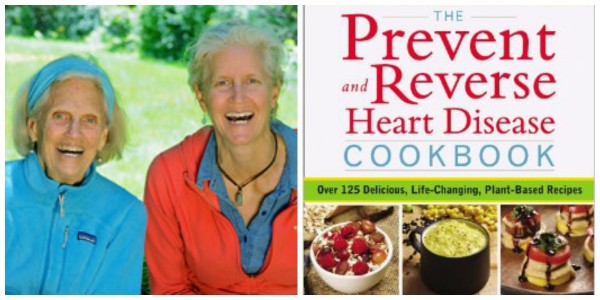 “[THE VEGETARIAN FLAVOR BIBLE is] a masterpiece.”
–Ann Crile Esselstyn, in an email

One of the highlights of our summer of 2014 was attending “PlantStock,” the annual gathering on the Esselstyns’ family farm in Claverack (a short drive from Woodstock), New York, organized as one of author Rip Esselstyn‘s not-to-be-missed Engine 2 retreats.  Not only is it where we first had the pleasure of meeting T. Colin Campbell in person (which we’d agreed with another participant waiting in line to say hello was as exciting as being backstage waiting to meet Mick Jagger), but where we were first introduced to the entire Esselstyn family and the true scope of their awe-inspiring contributions to the plant-based community.  Ann’s rock-star husband Caldwell B. Esselstyn, Jr., MD (to whom their cookbook is dedicated, along with Jane’s husband Brian Hart) wrote the bestselling Prevent and Reverse Heart Disease, while rock-star son Rip Esselstyn hit the New York Times bestseller list with his Engine 2 Diet.

This family’s all-star talents in the plant-based world extend to its female members.  Mom Ann and daughter Jane have infectious enthusiasm for the recipes they’ve developed for their specific audience of those undertaking the serious business of  preventing and reversing heart disease that call for uber-restrictiveness: “no meat, no dairy, no oil or nuts, and minimal salt and sweetener.”  Luckily, the Esselstyns put their real focus on all the delicious ingredients that can be enjoyed:  vegetables, fruits, legumes, and whole grains “brimming with fiber, nutrients, and antioxidants, all great nourishment for your heart and your overall health.”  We’re already planning to follow their recipe for “Tex-Mex Kale Chips” (which call for black pepper + chili powder + cumin + garlic powder + onion powder + oregano + red pepper flakes) the next time we make them. 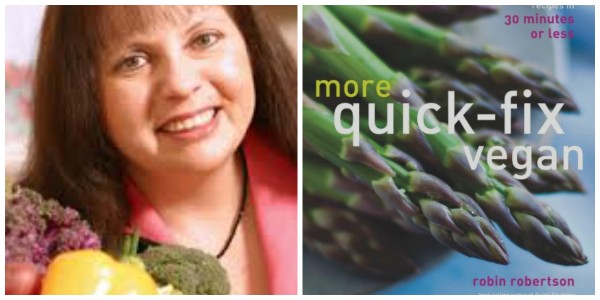 “[THE FLAVOR BIBLE is] one of my three favorite non-cookbook books.”
–Robin Robertson, author of more than 20 cookbooks

We once thought there had to be more than one “Robin Robertson” writing meatless cookbooks because there were so many of them around — and we had a hard time believing that they all came from the same pen of the same youngish-looking woman!  But they all did indeed — including not one but two of the most lauded vegan cookbooks of 2014.

More Quick-Fix Vegan is the 2014 follow-up to Robin’s popular 2011 book Quick-Fix Vegan, which drew raves from readers for delivering on its promise to get delicious plant-based meals on the table in less than 30 minutes.  It even inspired The Washington Post‘s vegetarian food editor Joe Yonan to play with “giving kale the Southern treatment” with black-eyed peas and smoky grits. 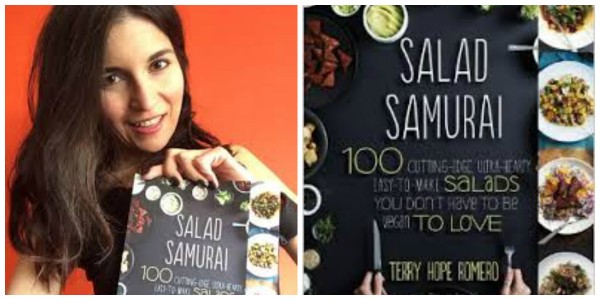 We first met bestselling author Terry Hope Romero (who co-authored Veganomicon with Isa Chandra Moskowitz) when we were fellow in-studio guests several years ago on Judith Regan‘s annual Thanksgiving Eve radio show.  At that point, we were honestly surprised to learn that a vegan cookbook author was even familiar with THE FLAVOR BIBLE, which was still relatively new, let alone a self-described fan of the book.  (C’mon…let’s be honest:  At that point, we still thought all vegans were probably uptight radical finger-pointing self-satisfied…oh, never mind the stereotypes.  The truth is, we didn’t really know any vegans.)  Even through our brief hanging-out together during that show, we could see that Terry was clearly a very cool woman.  We both liked her immediately, and managed to keep in touch over the years, even coming to think of her as our first-ever vegan kind-of friend.

Terry pushes us to think outside the box about salads, more regularly incorporating an even wider range of ingredients than we might have previously — including raw, cooked, and pickled vegetables, not to mention all manner of fruit, whole grains, nuts, seeds, tofu, and tempeh — as well as a truly global array of flavor influences, including Indian, Thai, and Middle Eastern.  While we’ve enjoyed a number of her books — both those co-authored with Isa like Vegan Cookies Invade Your Cookie Jar (2009), Vegan Cupcakes Take Over the World and Vegan Pie in the Sky (2011), as well as those she’s written solo such as Vegan Eats World (2014) and Viva Vegan! (2010) — Terry’s new Salad Samurai just might be our favorite of hers of all.  It’s the #1 vegan cookbook we’re most looking forward to putting to work in our home kitchen in 2015. 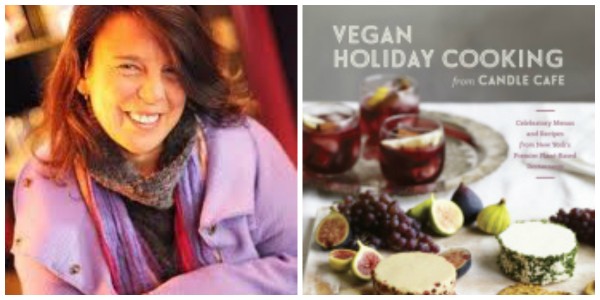 Joy Pierson is the co-owner (with her husband Bart Potenza) of the Candle Cafes and Candle 79, of which Angel Ramos and Jorge Pineda serve as chef and pastry chef, respectively.  The pioneering team behind the creation of vegan fine dining in America — and the first to earn a two-star rating from The New York Times for their restaurant — has influenced and inspired scores of other restaurants popping up increasingly frequently across the country. Candle Cafe is among THE very best — and among our VERY favorite — vegan restaurants in America, and one of our very favorite restaurants in New York City of any kind.

Given co-owner Joy Pierson’s unique influence and perspective as a flavor-loving nutritionist, the cuisine at the Cafes and at Candle 79 itself represents some of the best nutrient-dense plant-based whole-food cooking being done in America today, and many (and arguably most) dishes are as healthful as they are delicious.  Many these recipes have already been collected in two previous cookbooks:  2003’s The Candle Cafe Cookbook and 2011’s Candle 79 Cookbook.

But the holidays are often about indulging, so Vegan Holiday Cooking — which celebrates recipes to make for holidays year-round — adds something new to the Candle canon.  Having embraced a plant-strong diet as of May 2012, we welcomed the release of this book as we sought ways to balance our typical indulgence around the holidays with our new commitment to plant-strong eating. While we don’t plan to enjoy them on a daily basis, Candle Cafe’s takes on vegan creme fraiche [one based on vegan cream cheese + silken tofu + lemon juice + water, and another based on almonds + canola oil + water] and nut cheezes [based on cashews and macadamia nuts] are a delight to add to our vegan kitchen repertoire.

So while we were happy to have had access to these recipes (e.g., Pumpkin Seed-Crusted Tempeh with Roasted Ginger-Maple Sweet Potatoes, and Porcini-Crusted Seitan with Glazed Cipollini Onions and Mushroom Gravy) with Thanksgiving, Christmas, and New Year’s Eve approaching, we look forward to indulging on other holidays all year long — especially given suggested recipes provided for the Super Bowl, Lunar New Year, Valentine’s Day, Passover (love the “Chopped Liver” recipe featuring walnuts + chickpeas + portobellos!), Easter, Cinco de Mayo, and the Fourth of July! 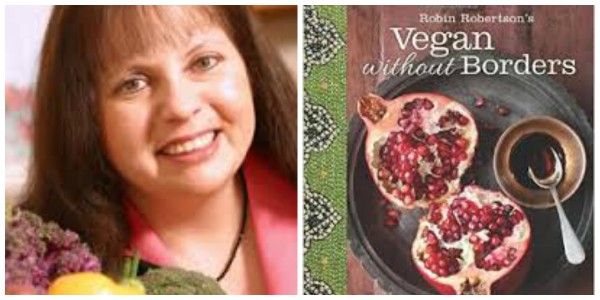 *Vegan Without Borders by Robin Robertson

We learned a tremendous amount while researching and writing our 2003 book The New American Chef, which focused on the cuisines of 10 different countries and the lessons those cuisines imparted that would make anyone a better cook, no matter what they were cooking.  The prolific Robin Robertson takes on dishes from more than 20 different countries in Vegan Without Borders.  Described as “a celebration of the world’s cuisines that unites culinary traditions with plant-based ingredients,” the book allows health-conscious cooks to “travel the world while also experimenting with international flavors and ingredients right in their own kitchen.”

Robin draws her culinary influences in this book from Europe (Italy, France, Spain, Portugal, Greece, Eastern Europe, and the British Isles), The Americas (United States, Mexico, the Caribbean, and South America), Africa, the Middle East, India, and Asia (China, Thailand, Japan, Korea, Vietnam, and the Southeast Asia Islands).  In some cases, the dishes are authentically vegan; in others, she uses the original dish as her starting point while substituting meatless ingredients for meat without significantly changing any other aspects of the dish’s original flavor profile.

*By the way, the books marked with asterisks appear with *THE VEGETARIAN FLAVOR BIBLE (an honorable mention, as it’s not technically vegan) on Vance Lehmkuhl‘s well-curated list of “The Top 10 Vegan Cookbooks of 2014,” which you can read in the Philadelphia Daily News here.

Ann Crile Esselstyn and Jane Esselstyn can be found at DrEsselstyn.com or at Engine2Diet.com.

Angela Liddon can be found at OhSheGlows.com.

Joy Pierson can be found at CandleCafe.com.

Robin Robertson can be found at RobinRobertson.com.

Terry Hope Romero can be found at VeganLatina.com.