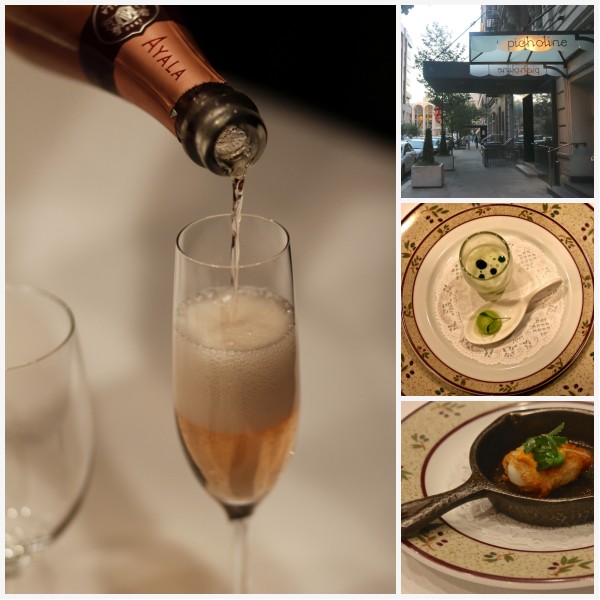 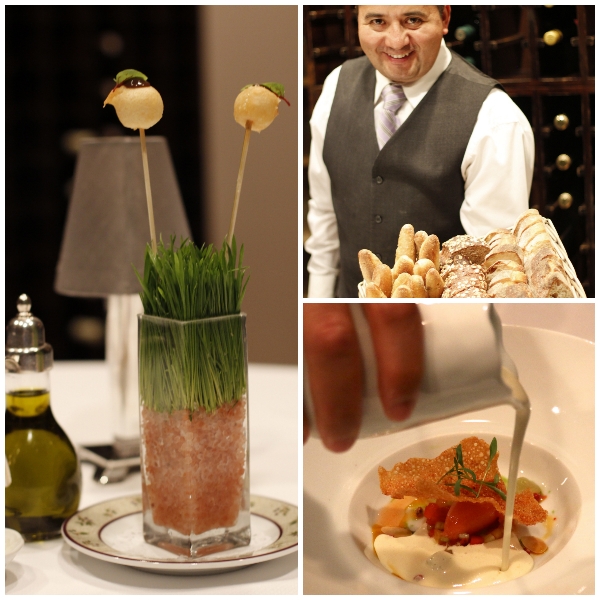 We kicked off our evening with glasses of Ayala Rose Champagne, which accompanied the evening’s amuses-bouches:  the first, a melon duet whose flavors spanned Mexico (Santa Claus melon enhanced with chile and lime) and Thailand (a honeydew melon soup accented by cilantro oil, ginger, and lemongrass); and the second a concoction of hummus on brioche with a quail egg and chickpea sprouts served in a tiny skillet that was  decadently, richly delicious.

Deep-fried bites of Manchego cheese tempura, accented with sorrel and served on sticks, were followed by a a bread selection that features picholine olive rolls, sourdough bread, and multigrain bread both substantial enough to taste healthful yet light enough to be appropriate for fine dining.

Perhaps Karen’s all-time favorite dish is Terrance Brennan’s extraordinary white gazpacho, which has always been rich and creamy even though it is dairyfree (with its creaminess supplied by almond milk).  A summer dish, we savored one of its last appearances of the season. 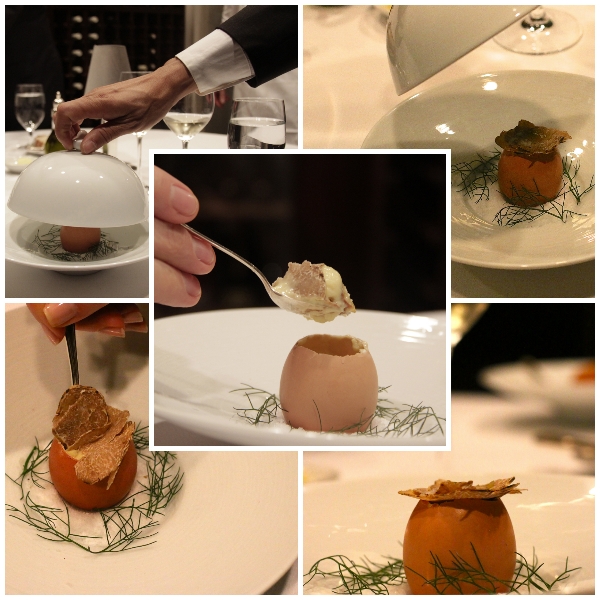 A hollowed-out eggshell housed just two to three rich and decadent bites of soft scrambled eggs mousseline with potato and white truffle.  Brennan later explained that the eggs are first sous vide, then put through an ISO  canister, which is what gives them the creamy texture of pommes puree. 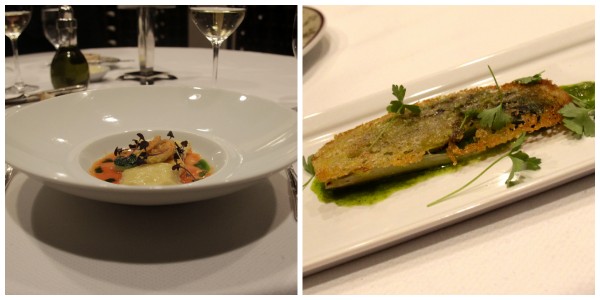 One of the best, and most surprising, food and wine pairings of the night presented itself just after we were served sheepsmilk ricotta agnolotti with heirloom summer squash served with a raw tomato vinaigrette accented by basil and pine nuts.  Typically, tomato sauce says “red” to most people (whether Chianti or a less-traditional red), but Picholine’s sommelier Nicolas Rouet proved yet again that raw tomato’s “green” notes can be enhanced by a white wine — in this case, a glass of Yves Cuilleron Viognier.

We were worried to see the next dish arrive at our table because we mistook it by eye for fish with a crispy crust — but it was in fact lettuces en croute, whose unusual flavors, temperatures, and textures for these ingredients were even more satisfying. 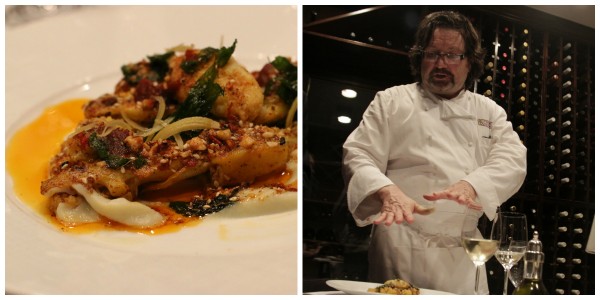 We were delighted that Terrance Brennan stopped by to personally deliver the next dish, which featured cauliflower three ways — roasted, sous-vide, and pureed (thinned to the texture of a cream sauce) — served with dates and preserved lemon, and accented by dukkah, harissa, and mint.  (In retrospect, that probably should have tipped us off that it was a dish of which Brennan was particularly proud.)  Upon his first tastes, Andrew declared it to be, “One of the best cauliflower dishes of my life…” while Karen simply oohed and ahhed her way through it before writing in her notes, “This dish takes you on a magic carpet ride….I will never forget it!” 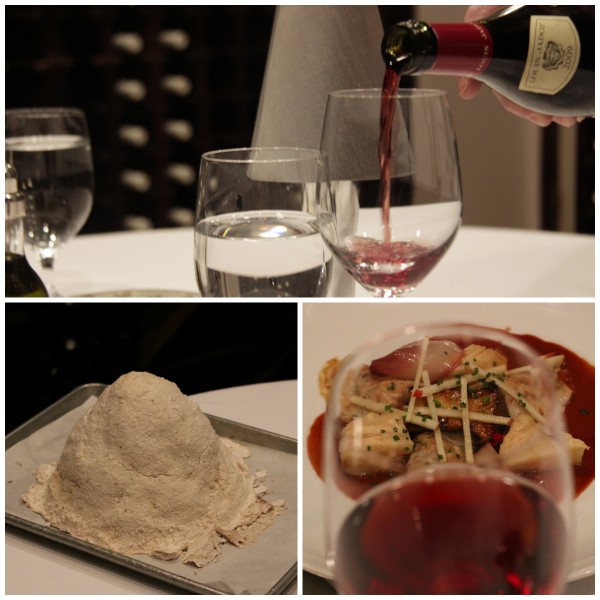 Nicolas poured glasses of Louis Jadot Pinot Noir to accompany our dish made of celery root that had been baked in a salt crust (which was presented ceremoniously at our table, before the dish was finished in the kitchen), which turned out to be celery root “gluten-free ravioli” (made from thin slices of celery root), which were stuffed with wild mushrooms and topped with trumpet royale mushrooms  and mushroom “Bordelaise” sauce, garnished with a few julienned apple slices from the Lincoln Center farmers market just a few blocks away. 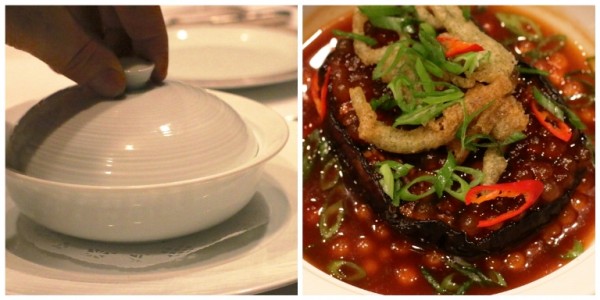 On Picholine’s menu, this dish is simply listed as “Grilled and Smoked Eggplant:  ‘Chinoise Flavors,’ Tapioca,” which never would have encouraged us to order it.  Thank God it was part of the tasting menu, for how sad we’d have been to have missed the unveiling of this wondrous combination of flavors and textures that satisfied us in the way we formerly turned to dishes like braised short ribs to achieve.

Enhanced by crunchy nori tempura, this dish completed our around-the-world journey that had taken us seamlessly during a single meal through the flavors of France, Italy, Mexico, the Middle East, Morocco, Spain, Thailand, and the United States.

We were so full at that point that we’d momentarily considered passing on dessert, but as members of the fan club of pastry chef Daniel Kleinhandler‘s desserts (whose members also include The New York Times and SeriousEats.com), we knew better.  Sometimes drawing on classic pairings such as figs + Roquefort and other times showcasing the sweetness of savory ingredients (after all, it’s called “sweet corn” for a reason) with textural variations (from spongy to crumbly), he pushed our buttons during this visit by pairing peaches with fresh tomatoes.  Damned if he didn’t pull it off.

Picholine is at 35 West 64th Street (between Broadway and Central Park West), in Manhattan.  The restaurant has a cozy private wine room seating up to 8 guests, and a larger private room for cocktail parties or seated events serving up to 22 guests.  212.724.8585.  Web:  picholinenyc.com